"I'm sorry, but your father has died."

The words hit me like a ton of bricks.  I was at work at the time.  It was May 3rd, 2010; and I had just received an email from my sister that Dad was doing relatively well.  Then, this phone call from the nursing home where Dad had moved just 14 days earlier.

We knew he was on his way out.  One of his nurses had made that point clear to us just a week before.  I was off work that week to spend as much time with him as I could, not that he was awake very much.  I decided to return to work on May 3rd, and that is the day he passed.  Figures.

I called my younger sister and told her.  We weren't sure where my mother and older sister were.  Turns out that they were at the family dwelling, and it further turns out that they had been in to see him 30 minutes earlier.  They left, and he was alive.  His nurse checked in on him 10 minutes later, and he was gone.  My name and number happened to be the first one she saw on the list, which is why she called me.

I composed myself.  I was in the middle of working on something for a client when I got the call.  My mind went blank; I completely forgot how to perform this task that I had done without a problem 100 times.  I signed the ticket over to a co-worker.  I sent an email to him and my various bosses explaining what had happened and that I would be off for a while, and got up and left.

I was walking to my car, which was parked deep in the south end of the city, when my cell rang.  It was Kevin, who all but insisted on driving me home.  While I still feel I could have done it, I let him drive me home.  Patricia, in turn, drove Kevin home while I remained at my house packing things for the week.  I told the cats what had happened.  They hung around me and didn't fight for a change.  On some level, they just knew. Cats are smarter than dogs.  They just are.

Patricia returned from driving Kevin home.  We left for the Valley, for the nursing home.  I sent out a tweet that my father had died and then shut off the BlackBerry for the evening.  Upon our arrival, we found the remaining members of the family in the family meeting room.  We walked to Dad's room, where I said my final goodbyes.  The remaining family members joined Patricia and me.  The minister walked in and we prayed over Dad.

Back in the meeting room, we talked about the funeral arrangements.  We discussed things I will not discuss here, but the result was that the funeral would be Friday the 7th.  The extra day or so would be to allow extended family members who live out of province to attend the funeral.

I was asked to write the eulogy.  I'm still not sure why.  But I agreed to do so, and began working on it Tuesday morning.

The next few days were a flurry of funeral preparations.  Wednesday the womanfolk drank wine and prepared a couple memory boards composed of pictures of Dad and the family.  I had emailed a bunch of digital pictures to my niece, who in turn had them printed off.  One picture was of me and my younger sister when we were kids, on Christmas Day, in the early 1970's.  I scanned in the picture, emailed it to my niece, who in turn had it printed off.  I could have just given her the damn picture and saved the trouble. 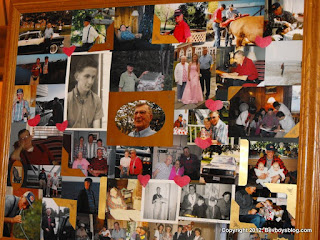 While the memory board was being put together, I sat off in the corner of the room, sober, writing the eulogy. When I finished a rough draft, I had to get up and go for a walk to get my mind off the enormity of what I would be doing 2 days hence. I returned to the house and read the draft to those present.  They liked it.  I read it to Mom that evening, and she asked for one or two changes.

Thursday was the visitations at the funeral home.   The chest containing Dad's ashes was on display along with various pictures and things that Dad liked.  Before and after the visitations, I was practicing the delivery of the eulogy.  I would re-word things here and there so that there was a natural flow, a rhythm that I found pleasing.  A speech is like a  recipe all of whose ingredients work together to form a product greater than the sum of its parts.  I wanted this to be the best speech I had ever written, ever delivered.  I owed that to my dad. 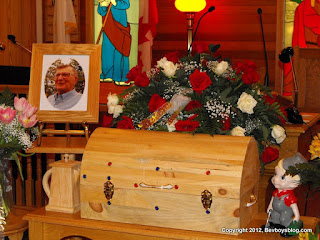 The day of the funeral, the funeral home sent its limosine to transport us.  I don't think I'd ever been in a limo before.  I looked out the window at the house as we drove away and knew that it wouldn't ever be the same there again.

The funeral itself was nice.  At the appointed time, I got up, in front of a couple hundred people and presented the eulogy.  It was understood that if I needed assistance, I could signal Patricia and she would stand up there with me.

The eulogy seemed to go over well.  People laughed at the right places, and seemed to dab their eyes at the right spots, too.  After the funeral, people came up to me and said I'd done a good job.  I'm told that for months afterward, people were walking up to my younger sister and telling her how good a job I had done.

Here's a link to the eulogy, if you want to read it.

After we ate some of the expensive food the funeral home put out, the immediate family piled into the limo for the internment.  The police in Kentville blocked traffic and saluted the limo as we drove past.  This continued until we got to the cemetary, where one last cop saluted us.

The internment ceremony was quick and efficient.  They lowered Dad into the grave.  We said a few more words, and left.

We returned to the house and put the remainder of the food from the service in the fridge.  We didn't feel like cooking anything, so a bunch of us went out to dinner at the Port Pub in Port Williams.  After that, Patricia and I returned to the city, returning to the 2 cats we had left behind 2 days before.  They were fairly hungry even though we had left them lots of extra food. 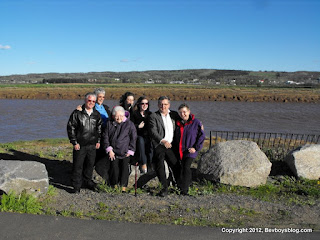 Saturday, in my skivvies, I reflected on the week that was just passed.  My life would never be the same again.


The weekend passed.  I spent too much time trying to get the wireless working on a laptop computer that was running ubuntu.  Come Sunday, I returned to the Valley for the week to take care of things for the family.  My mother would be entitled to a portion of my dad's pension.  There would be other things to do for her comfort as well.

On May 10th, I interviewed Colin and Kate at K-Rock.  I know it seems weird to interview people for the Blog when I had just buried my father, but I needed some routine in my life, and that passed for it.

Monday morning, May 17th, I returned to work.  Patricia and I were parked across the street from where I was working at the time when a garbage truck going up the street perpendicular to the one we were on abruptly decided to back up on to "our" street.

The driver backed up the truck, barreling toward us.  There were no other vehicles between him and us.  He continued to back up, so we laid on the horn to remind him.  The passenger got out and guided the truck even closer to us before stopping.  The driver got out and scowled at me and went on picking up the garbage from the local office building.

I got out of the truck and looked for the number of the company on the truck so that I could call and complain.  The driver saw me and yelled at me to tell me where the number one.  He began to swear at me and lunge in my direction, trying to goad me into a fight.

It was bizarre, being in this situation where a truck driver wanted to pick a fight with me when we had done nothing wrong.  People I worked with started coming over to me.  One guy asked if the driver had hit me and I told him no.

The truck passenger, his partner, didn't say anything to me, allowing the driver to continue his harangue.  I did call his boss.  His name was Rick, and he was useless.  He just said, "Well, at least nobody got hurt" over and over again.

The truck eventually left, but not before folks asked if we were ok.   The man who ran the diner in the office building next to us reported that he had had many problems with the garbage collectors over the years.  They were rude to him and smashed into stop signs and parking meters without a care.

I went into work after that and didn't tell anybody about what had just happened.  They're only finding out by reading this now.  I was welcomed back to work and it was good to be there.


A few weeks later, we 3 kids went through Dad's things to decide what to keep and what to toss.  He was a real pack rat.  Among his papers was the following, an invitation to participate in a home beautification contest for the year 1968.  I couldn't resist bringing it back here and scanning it and sharing it with you.  I wonder who won? 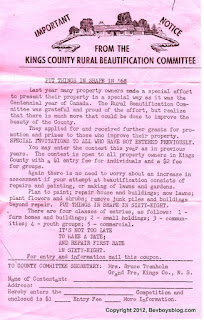 Over the following months, I split my time among my house, the cottage and my mother's.  I mowed her lawn a lot.  I prepared for the Fall clean up by going through the basement and finding a ton of things to toss.  My sister and I removed the old hot water tank from the basement with the aid of the hand truck I bought for Dad several years ago.  I mowed the lawn some more.  Worked out in the garage.  Prepared for the sale of his trucks and other effects.  Did executor stuff.
Other things happened in 2010.  I interviewed several folks for the blog.  I participated in the 3rd annual Christmas Tie Extravaganza in December.  And we spent our first Christmas without our father.  That was tough.
2010 was over.  2011 beckoned.  And I looked forward to it.  It couldn't be worse.
Or, could it?
See you tomorrow.
Bevboy
Posted by Bevboy at 6:32 PM