Hey, everyone.  Back from a quick trip to the Valley.  Well, it wasn't that quick.

We got up just before 8 and left the house around 8:30.  We arrived in Wolfville just past 9:30 and checked out the Farmer's Market there.  It's a nice market, meaning that it isn't very big and doesn't take very long to go through it.  I always run into someone there.  This morning, I heard a woman call my name.  It turned out to be the wife of a former professor of mine.  Rick was there as well.  They met Patricia.  Rick thanked me for the anecdote I contributed to his retirement booklet (former students were encouraged to send in a funny story about him, and I sent in one I thought was pretty good).  We talked for a few minutes and parted.  Like I said, I always run into someone there.  Last time, it was Lea Miller from K-Rock.  Time before that, it was someone from my high school.  Time before that, it was someone who was in my Toastmasters club back in 1994.  You get my drift.

We went to my mother's and then out to her garage for a few minutes.  Returning to the house, where my sister had arrived,  we all ate lunch prepared by my mother.  Drove to a local flower shop.  Picked out some flowers.  And... we drove out to my father's grave. 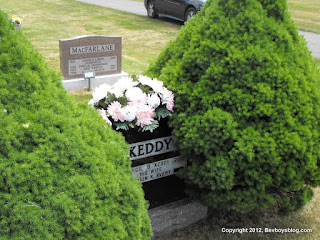 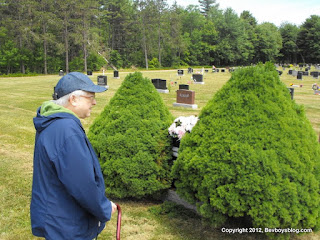 Yeah, those damn shrubs are in the way.  We will cut them back or eliminate them, sooner rather than later.

Dad is 2 years in his grave now, and I still think of him every day, sometimes at the oddest of times.  He wasn't a perfect man, but neither am I, and neither are you.  Focusing on his faults misses the point: That he stood by us, wanted us to be successful, and worked hard for everything he ever had in life.  Those are pretty good traits in my book, and should be in yours, too.

Tomorrow, I will get up and face my day.  It will be Father's Day.  I will endure the ads on television and the songs on the radio that are devoted to fathers everywhere; and I will absent-mindedly reach for the phone to call my father before I check myself.  I'm just glad I told him how I felt about him many times while I had the chance.

Bevboy
Posted by Bevboy at 7:05 PM

Email ThisBlogThis!Share to TwitterShare to FacebookShare to Pinterest
Labels: Dad