Here are 2 pictures from my birthday party that year.  I wrote in length about that birthday party in part three of the early Bevboy, which you can find right here.  I'm the one with glasses.  The boy in the sccond picture in brown is now a village commissioner at Port Williams.  I knew him when!! 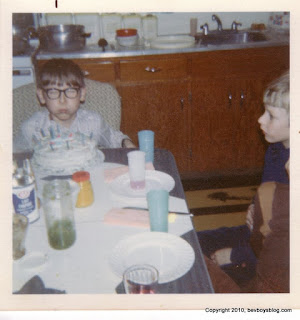 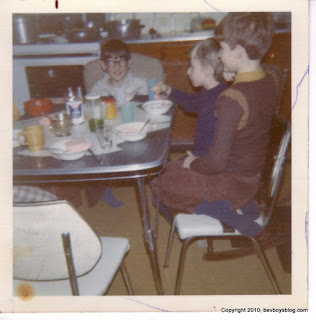 By the way, that cabinetry still exists in my mother's kitchen.  Dad built things to last!

Sometime that Summer a bunch of us kids went to Acadia University to go swimming.  One guy there that day, Randy M., was running around asking if someone could lend him a dime.  Having a generosity of spirit, I reached into my pocket and pulled out a dime and passed it to him.  I think he thanked me.

It's not like I had a lot of dimes to lend out.  My allowance was but a dollar a week.  I just felt a need to help people.  The previous year, I caught hell from my parents because I was giving out my hot dogs to other students on Hot Dog Day.  It didn't seem fair or right to me that some kids would be able to afford the 30 cents for a hot dog and others couldn't.  One guy was watching me raise the thing to my mouth with such a sense of hunger and desperation that I just gave it to him.  My mistake was in telling my parents.

Anyway, I lent the dime to Randy with the expectation that he would reimburse me down the road.  He never did.  And he made no effort to be my friend either.  He didn't talk to me any more after that, not even to hit me up for more money.  I felt used.

I learned from that experience, but it was a lesson I had to re-learn a few more times over the years before it finally stuck.  Just for fun, this evening I went to an online calculator, this one, and entered the principal amount of 10 cents and assumed an 8 percent average routine, compounded quarterly, for 38 years.  That simple dime, if invested as I just described, would have yielded $1.93 in interest.  Instead, I "lent" it to some guy who has probably spent his life hitting people up for money.

After being burned a few more times, in the years to come, I had a eureka moment that has remained with me.  If I lend you any money, I will assume that I will not get it back.  If I have the money and feel like doing it, I will lend it to you and figure that the money is gone for good.  If I do get it back, then my faith in humanity will be reinforced, and I will be pleasantly surprised to boot.

I hope that Randy has had a successful life.  Yes, I remember his last name very well.  No, I don't think I should give it out.

Dad started to improve the home property in 1974.  He built a garage.  Anyone visiting the property today may notice that there is a crack in the window on the garage door.  There have been many theories as to how that happened.  I can confirm I did it.  When the door was delivered in anticipation of its being installed, I crawled around the back of the truck and onto the door.  I was having fun.  I was crawling around and heard a crunch under my left knee.  I knew enough to get out of there, and did.  Dad never fixed the crack.  It remains there to this day!  Dad would effect more improvements to the house in 1975.

I went from Grade 4 to Grade 5 in September of 1974.  This was a big deal because we went from the "new" school to the "old" school, which was directly next door to the new school  The old school was built in the 1930's.  It would burn down in 1983, and that was a loss of a piece of my childhood.   I will tell you about it in the next week or so.

My Grade 5 teacher was Miss Goodine.  I thought she was pretty neat.  But I watched a lot of cop shows on television back then, and I got it in my head that "mo" was short for "method of operation".  Whenever we had a spelling test, or we had to indicate what an abbreviation might be short for, I was a smarty pants and took my tv watching and comics reading into great account.  Whenever we were asked to spell out what "mo" was short for, I didn't write "month" like everybody else did.  I always wrote out "method of operation".  Miss Goodine got more and more shorty with me until she called me out for my attitude in class one day, at which time I reluctantly started spelling out "mo" correctly.  Score one for the man.

I still remember having to write a report in which we had to describe what life was like as a fictitious character in the Old West.  I can't remember what my character was, but I wrote and read aloud that he had killed hundreds of people.  Not to be outdone, some of my chums would make sure that their characters had killed even more folks.  Miss Goodine praised all of us.  I don't get why.  I guess it's one of those, "let's encourage the little buggers" things that teachers do, which only encourages us.

Sometime that Fall, on the playground, some of my chums were talking about a song they had heard on the radio.  It was a ribald song called "The Streak" by Ray Stevens.  They were quoting the lyrics which to a 10 year old kid would be the height of risque, but by today's standards would be awfully tame.  I still get a kick out of it, though.

Here.  Check it out:


I enjoyed hearing them talk about the song and other things they heard on their radios.  I felt terribly disadvantaged.  I didn't have a radio of my own.  We had, as far as I recall, just one radio in the house, which we only had on at breakfast time to see if school was cancelled (when it was cancelled, a neighbour down the street would always call us anyway, making the radio nearly useless to my parents).

I wanted a radio of my own for Christmas.  I knew we didn't have much money and told Dad he could just get me a cheap one.  He wanted to get me one of some decent quality so that it would last longer.  In theory.

The months crawled by with the speed of eroding stone.  Finally, Christmas came.  December 25th fell on a Wednesday that year.  I have no idea what else I got the Christmas.  Probably underwear and socks and some toys.  But the thing that I got that changed my life forever was my first radio.

Given how important this device became to me over the next 38 years, you'd think I could remember what the model was.  But, I don't.  It was a small table top radio with a brown faux-leather case.  A leather-like handle.  AM/FM of course.  There was a dial that let me move up and down the bands.   Many years later, my boss at the Acadia University library had a radio just like it in his office.  I wanted to steal it, but resisted the urge.

I will discuss more, much more, about this radio, and other radios important to my life, in future posts in this series.

1974 came to a close.  I was still in grade 5.  In the next few months, I would participate in building a fort in my classroom and contribute to a booklet of poetry which I still have*.  I had a pivotal class photo taken.  And, The Beachcombers was in full swing.  I will tell you about all that, tomorrow.

* I am not 100 percent positive whether that booklet of poetry was produced in 1974 or early in 1975. I will exercise a writer's privilege and decide it was in the Winter of 1975.  I mean, how many people would even remember doing this damned booklet at all?  I mean, really?
Posted by Bevboy at 6:52 PM