I was in Grade Five for the first six months of that year.  Sometime between my birthday in February and the early part of Spring, we  had our class photos taken.  I was having a hard time smiling.  Miss Goodine told me to think of something sarcastic.  I did. This is the photo that was taken. 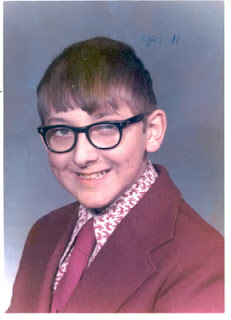 If that seems familiar, it is because, in 2009, I hired local caricaturist Don Pinsent to produce what has become the official Bevboy avatar, as follows: 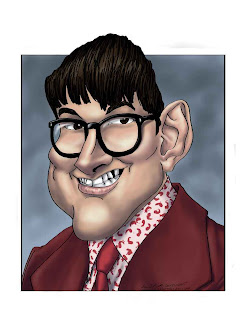 Much to my relief, Don  did not exaggerate my ears.

What you did not know is that the first photo was nearly lost.  Several years ago, my mother was going to toss out a bunch of the old family photo albums.  Aghast, I said no and took one in particular after making Mom promise not to throw out any such thing.  I got the photo album back home and found the above picture, which I remembered well and fondly.   I have never been able to find another copy of the photo anywhere.  A friend at my then-work scanned it in for me.  I still have the original here at home, but there are many digitized versions out there, including on my Facebook.

I have got a lot of recognition for the caricature that Don did.  People love the business cards with the caricature on them.  I don't know that Don got the job as an artist at Frank Magazine as a result of my avatar, and my praising of his work, but it probably didn't hurt.

Also that Winter/Spring of 1975, we had to produce a book of poetry.  We'd each select a poem or two.  They would be collected into a booklet, whose cover each of us had to produce for ourselves.  I'd do a cover for my copy.  Joe would do one for his.  Jill for hers.  And so on.

Here's what I came up with: 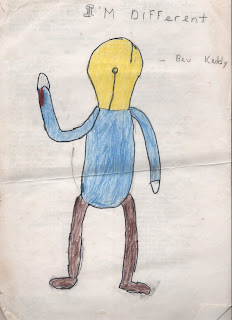 And here are the poems I selected: 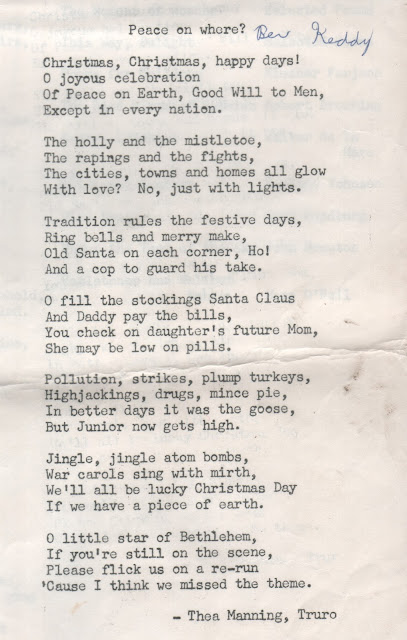 I still get a kick out of this one: 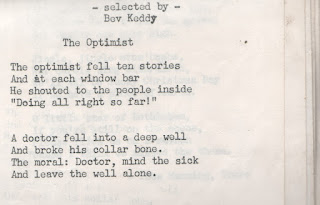 The first poem, a mad take on Christmas from someone named Thea Manning in Truro, Nova Scotia, captured my fancy and caused no end in delight for me.  I have no idea where I first came upon it.  I have spent the last 37 years quoting verses from it in my head.  Seeing it again in print after all these years is still a pleasure for me.  Of course, at the time, I didn't get the references to the daughter being low on pills.  I barely do now, come to think of it.  And why my teacher let me choose the poem, with its mentions of rape and birth control pills and civil disharmony, remains a mystery to me.  The other  one, about an eternal optimist falling to his death, should also have set off some red flags.  Ah, well.  I turned out ok.  Mostly.

We built a fort in our classroom that year.  We each had to write a short piece on what life was like back then.  Here is the cover I did for my copy: 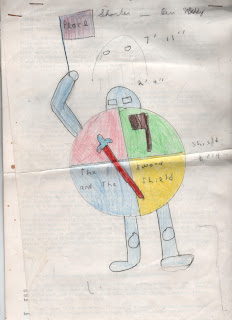 I couldn't draw any better today, by the way.

Let's see here.  I mentioned that as of Grade  5, we were moved to the old building.  I loved that building.  There was a good sized library in which I would spend as much time as I could, separate from the time we would spend there as a class.  I had never seen so many books in one place.  I do now, every day, here in my house; but back then, I had never seen so many damned books in one place.

I took an interest in looking through some of the more obscure corners of that room and examining some books that had not been borrowed in a long time.  I noticed one book by a man named Jacques Futrelle.  It was a series of stories featuring a character named Professor Augustus S. F. X. Van Dusen, a.k.a.  The Thinking Machine.


These stories captivated me.  To an 11 year old, they were the height of literature.  They were mystery stories, puzzle stories, in which the titular character would have to solve some incredible mystery using his vast intellect.  One story, heavily anthologized for more than 100 years, is called "The Problem of Cell 13", in which he agrees to be incarcerated for a week and must devise a way out.  Of course, there are about 1000 cosmic tumblers that align such that he is able to effect an escape.  If this happened to you or me, even 100 years ago, we would never have got out.  These stories wear on you after a while.


But back then, I loved those stories, collected in a tattered paperback which I read from cover to cover in short order.  A year or two later, I would learn that Futrelle died on the Titanic.  He had been offered a life boat, but wanted his wife to take it instead.  He died so that she might live.  Dumb ass.


Futrelle was used by writer Max Allan Collins in a fictional murder mystery on the Titanic, as a detective.  It's in my to-be-read pile.


There is a website which has many of these stories.  It isn't updated very often, but it is run by his grandson.  Here is a link to it.


One day, in the Spring, Miss Goodine stepped out for a few minutes for some reason.  Being boys, we became boisterous.  (That word should be spelled "boysterous", because you never see girls get that way.)  I got into a heated discussion with another boy.  Frig knows what we were talking about.  We became so loud that the Grade 6 teacher across the hall came over to tell us to shut up.  He pointed a finger at me, and I cheerfully complied with his request.  I feared this man.  After all, 3 years earlier, I had nearly run him over on my bicycle.  I prayed I wouldn't have him as my Grade 6 teacher.


In May, on a Saturday, I was out riding my bike as part of a Sunday school picnic thing.  We were on a dirt road.  I was riding in the middle of it to try to avoid some ruts.  I didn't hear the car come up behind me.  Too late, the driver's mirror clipped my right hand, knocking me off my bike.  The car drove into the ditch.  People came running up to me. I was going into shock.  I had injured my hand.


Somehow, we got to the hospital.  I had broken my right thumb.  Blood was everywhere.  I required stitches and a splint to keep it all in place.  My father showed up at the hospital and I cried.  We went home.


I returned to school on Monday and everyone waned to know what had happened to me.


I still do not have 100 percent use of my right thumb.  There is a still a deep scar on it which you woudn't notice unless I brought it to your attention.  My thumb still hurts a bit when it rains.


I finshed Grade 5 in June.  Would have read comics that summer of course.  I was heavily into Spider-Man by this point.  However, it was in the late Summer of  early Fall of 1975 when a comic came out that I bought off the racks.  It was  Giant-Size X-Men #1, featuring a relaunch of these characters.  I paid 50 cents for it.  I loved it.


We had been allowed to take down the fort we had built in school.  I took home a small piece, a cardboard box into which I put some of my comic books.  My father one day received a phone call from someone who was looking for donations of comic books.  They would be ripped apart, page by page, panel  by panel, and be sent up North to help Inuits learn English.  My father volunteered many of my comics, including Giant-Size X-Men #1.  That book is now worth thousands of dollars.  My dad gave it away!  I tortured him with that information years later, and he apologized to me.  Sigh.


I began Grade 6 in September.  Mark Burgess and I went downstairs to Mr. Williams' class, assuming that we were going to be in his class.  Much to my chagrin, and probably Mark's, I learned otherwise, and we reported upstairs to Mr. J. Earl Doyle, the man who had pointed that finger at me 6 months earlier and whom I had nearly run into on my bike in 1972.  Yikes.


He worked us hard.  He wanted us all to be ready for high school and did not coddle us.  He told us, over and over, that we had a "responsibility to produce".    I would learn a lot that year.  In many ways, I still think of myself as being X number of years out of Grade 6.   I was saddened by his death 10 years or so ago.


I had a little desk at home in my bedroom.  I would keep my radio on it, and a metal pencil box that my brother had made in  Shop class and which I inherited, and which I still own.  I would do my home work and leisure reading at that little desk, sitting in my little chair.  I would play that radio all the time.  With it, I could tune into all kinds of AM radio stations in the province, in New Brunswick, and in many of the New England states.  A particular favourite became WINS, which had been an early rock and roll station that had hired and fired Alan Freed, the man credited with devising the phrase "Rock and Roll".  In 1965, WINS moved to a news station, and it was firmly ensconced in that format by the time I found the station in 1975.  I continue to have an AM tuner in my car, and one of my presets is WINS, 1010 AM.  "You give us 22 minutes, and we'll give you the world."  I loved that station.  Still do.


1975 drew to a close.  1976 yawned open like a chasm.  It would be a year of great change and stress and turmoil.  (And, let's not forget The Beachcombers.)  I have wrestled with what to leave in and what to gloss over.  I feel that the need to discuss what began to happen to me in 1976 should come out in the open.  I have spent the bulk of my life reflecting on that year, and the few that followed.  It is high time that the word got out.


I hope that I am correct in this decision.  And I hope that the change in tone you will see tomorrow does not turn any of you off or modify your opinion of me.