My father had built a new garage for the property in 1974.  In 1975, he built a piece on to the house.  He was adding 2 bedrooms.  The way the house was like before, there were still 3 bedrooms, but the middle bedroom, used by my sisters, was very small.  My bedroom was the one closest to the bathroom.  Then there was my sisters'.  After that, the entrance to the cellar.   Then, at the end of the hall, the entrance to my parents' bedroom.

What Dad did was make the entrance to the sisters' bedroom now the entrance to the cellar.  If you go into that house to this day and go downstairs, if you look up above the door frame, you will see a pink wall and a "Live Love" sticker put up there by my sister all those years ago.  A remnant of what that doorway originally led into!

The living room is now the biggest room in the house, by a wide margin.

In the Winter of 1976, I received my first issue of Ellery Queen's Mystery Magazine.  The story behind my history with that magazine can be found right here.

School-wise, I was still in Grade Six for the first six months of 1976.  Mr. Doyle still worked us hard.  He would criticise me for my clumsiness and my inability to perform certain tasks as quickly or as well as he would have liked.  In Art class, I took to making pop art, the 1970's fad, because it meant I could produce something, nearly anything, and claim that it conformed to a standard of art.  He eventually cottoned on to that and specifically mentioned that for a certain assignment, no "pop art" was allowed.  Bastard.  He would make me do it over and over again, and I was utterly unable to produce what he wanted with the quality he desired.  He threatened to "trounce" me the next time I messed up.  Admitting this to some friends, they just went ahead and did it for me.  Mr. Doyle was none the wiser.

In writing, in math, in most academic subjects, I was fine, sometimes even better than fine.  But in the Arts, in Sports, I sucked royally.  I learned then, and adhere to it now, that if I don't give a shit about something, if something is a bore to me, or a chore to do or to learn, then no amount of yelling at me, no threat, no carrot, no stick, will make the item in question important to me, or motivate me to learn it or to do it.  I'll do it because I have to, but my heart won't be into it.  Ask me about project management sometime.

The following has stuck with me.  I do not dwell on it, but in dredging through these memories and writing them down, I brought this one up as well.  Late in the Spring, a month or so before school got out, some kids were posing for some pictures.  I inserted myself into the picture only to be told to get out of it.  It was really my first clue that I wasn't that popular in the school, which was a surprise to me.

Further to that, it was sometime during the early months of 1976 that I learned that I would not be going to the school that most of my classmates would be going to.  Most of them, the vast bulk of them, would be attending Horton High School, which was then in Greenwich.  They mostly lived in Port Williams proper.  I lived on the outskirts, and at that early point in my life, it took some effort to keep in touch with them.  I'd visit them, or run into them; but they seldom came to me.  No point in asking me because I do not know.

Anyway, I would not be attending Horton High.  I would also not be attending Cornwallis District High as my sister and brother had.  We lived in an area where they would prefer that we went to Kings County Academy in Kentville.  There was a bus going to CDHS, that would drive thisclose to the house, but we were to go to KCA instead.

My parents were unhappy.  I was unhappy.  But I had no choice in the matter.

In early June, we had a class trip to Sherbrooke Village.  It was a long bus trip for us.  I will never forget that we were forbidden to take any reading material with us.  It meant sitting there in that bus for a long, long drive there and back again.  There was an 8-track tape, or a cassette, playing the same 10 or so songs over and over again.  The song that resonated with me, in a bad way, was Eric Clapton's version of  "I Shot the Sheriff".  I heard the song about 30 times that day.  When I hear that song on the radio, it takes me right back to that class trip.  Then I switch to another station.

Graduation from Grade Six came in June.  I passed easily.  On the last day of school, when we picked up our report cards, I wandered through the school one last time.  I lingered in the library for a few minutes.  I walked out.  Save for a couple of quick visits to the school to say hello to some teachers, I never set foot in that school again.  It would burn in a student-set fire in 1983.

That summer, several things happened.  My older sister, 21, moved out of the house, leaving 4 of us living there.  I saw my first concert.  It was with the Irish Rovers at the Kentville Centennial Arena.  And Dad took my younger sister and me to a movie.  Mom stayed home.  It was called Hawmps!  Yes, there was an exclamation mark in the title.  It would be the last movie I would see in theatres until I was 18.

We went to visit our grand parents in New Brunswick in 1976.  We took the Princess of Acadia over.  While on the boat, I noticed magazines of interest, and they were a good couple weeks ahead of when they'd be on sale on the mainland.  I noticed something called "Alfred Hitchcock's Mystery Magazine", the August 1976 issue.  I bought it, and continued to buy it for years as I could.  That issue was the US Bi-Centennial issue.  My fave story in the mag was called "A Pair of Recycled Jeans" by Lawrence Block.  It has been reprinted many times, under the title ""Funny You Should Ask".  It is a wicked story, wicked in terms of humour and in its shock value.  Why do people give away perfectly good used jeans, anyway?  Makes you wonder.

While in NB, we went across the border from St. Stephen to Calais Maine.  Like lots of people, we would buy some magazines and stuff and return them across the border and neglect to declare them.  In those pre 9/11 days, you could get away with that stuff.  Today, not so much.

September came.  The night before school, I was listening to my radio to an episode of "Boston Blackie", an old time radio show from the 1940's, broadcast on CBC radio in the summers.

The next day was my first day of school at Kings County Academy.  One point, on the bus to the school, I saw my cousin on his bike about 100 yards away.  He recognized me and waved.  I waved back.  Last friendly face I saw that day.

I was sent to 7D.  There were too many students to distribute to other classes.  A few brainiacs were mixed in with some... other students and that's how we got stuck together.

I was sitting where I was told.  I was awaiting roll call.  Next thing I knew, some guy started pinging my ears.   He continued to do it, to the great comic relief of other students.  Every time he saw me, Mike Hisko would say, "Ping those ears!" and proceed to do just that.

Over the next few months, I would be kicked, punched, verbally abused by anyone who was of a mind to do so.  In their own way, the girls were worse, pretending to flirt with me and then snatching away that bit of dignity, in much the same way Lucy would take the football away from Charlie Brown.

The few students who came over to KCA with me from Port Williams Elementary did not come to my aid or defence.  They participated in it as well.

Other students were picked on as well.  One girl was pushed down a hill and ended up running into the side of the school, splitting her head open.  But the special treatment seemed to be for me.

Even some of the teachers didn't like me.  The gym teacher was named Dave Harris.  A real jock.  He hated me.  I do not know to this day, just why.  He would yell at me during nearly every gym class.  Then, one day, he asked me why I never tried out for any school teams!  I was really struggling in his class.  Rather than help me along, work with me, he would just belittle me.

This delightful man, many years later, became the gym teacher for my niece.  She liked him just fine.  Go figure.

I started to hate going to school.  I would dread waking up in the morning.  Sunday nights were the worst.  They preceded Monday morning and returning to that place.  I started to think that I hadn't a friend in the world.   My self confidence nearly ceased to exist.  I didn't feel I could do anything right, and nobody in my sphere of influence did anything to disabuse me of that impression.

That Fall, I attended a Christmas concert in Port Williams.  A friend from elementary school, the guy in brown at my 10th birthday party in 1974, came up to me and reported that he'd heard that my marks were suffering.  There was a little smile on his face as he said it.  He walked away and I never saw him for another 10 years.  Which was fine with me.

Christmas came.  I got some stuff, but these 3 books have been kept all these years: 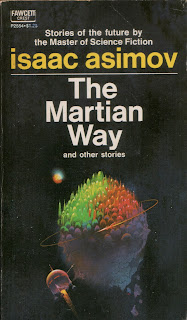 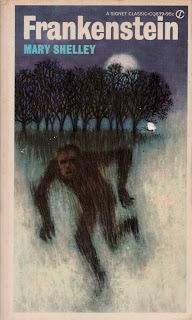 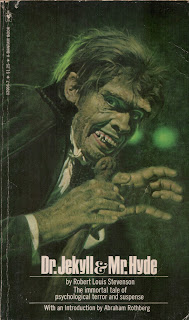 My mother bought me these books.  I hadn't asked for any of them.  I guess she was out one day, shopping for the holidays, and saw these books at a good price and decided to buy them for me.   I still think that the cover to Dr. Jekyll and Mr. Hyde is pretty neat.

1976 was over.  It began with an enhanced house.  It reached its height when I finished Grade Six.  And it reached its nadir starting in the Fall.  1977 would not get much better.  It would get worse.

I will tell you all about that in tomorrow's chapter of Bevboy's Blog.

Bevboy
Posted by Bevboy at 6:28 PM