I am back in the city, having left the cottage around 9:45 this morning.  Newbie and I arrived home to a stuffy house.  Patricia and Cindy remain at the cottage for a few more days.

The reason I returned early, rather than stay a few more days, will be revealed either tomorrow or Saturday.  As a hint, it takes place in the Valley, and I will be driving there in the morning.

Anyway, welcome to the first part of a multi-part series about my life in review.  Unlike the year in review series, this series will highlight random pictures along with my commentary on same.  I have been combing through my mother's and father's photo albums and found some very interesting pictures.

This is the earliest picture of me that I know of.  There may be some baby pictures somewhere, but don't ask me where they are. It was taken in November of 1965.  That's my mother holding me. 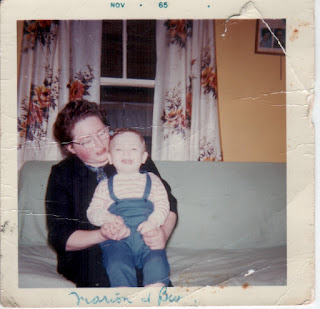 This picture was taken in 1969, probably the summer before I began school.  I vaguely remember the picture being taken.  I think that it was a travelling photographer thing, because back then you had travelling salesmen who would randomly knock on people's doors and try to sell them stuff.  This guy knocked on our door and my mother agreed to let me and my younger sister pose for the camera.  I clean up nice, don't I?

And Glenda's wearing a dress.  I don't think she wore one again until she got married in 1987! 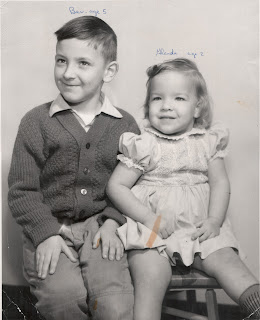 This is a really unusual one.  These are my father's maternal grandparents!  I had no idea this picture existed until earlier this evening.  The note on the back states that he was named George Amos Arenburg and he lived between November 3, 1858 and September 20, 1958.  He very nearly lived to be 100.

His wife was named Annie Mauria.   She lived between April 21, 1866 and October 21, 1949.  I know nothing about them.  My mother may be able to say something about George as she was married with 2 children when he passed in 1958.  I doubt very much whether she ever met Annie. 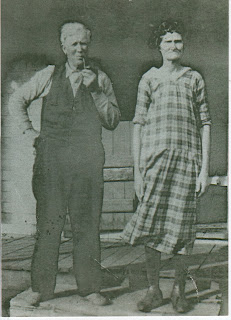 My paternal grandmother was visiting us sometime in the late 1960's.  I would have been a little kid, perhaps the one in the backseat, and I can see that the steps are on the side of the house, meaning the porch had been added; and the clothes line is visible by my father's head.

She died in April of 1977.  I was 13 years old, and I attended the very large funeral in Kentville. 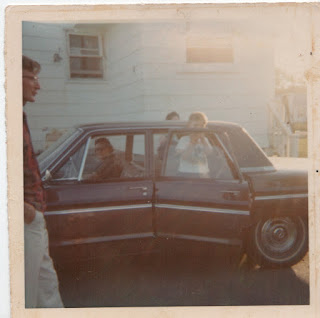 Another rare picture.  This is "Grammy Avery", my mother's paternal grandmother.  She lived in Baxter's Harbour, Nova Scotia, which is where my mother spent much of her childhood.

Grammy Avery ran a store.  She cooked food which was sold in that store.  I had relatives who ran a store in Baxter's Harbour through to the early 1980's, and this was not that store.  I do not know exactly where it was.  Perhaps someone reading this, will.

Anyway, a few years after this photo was taken, her house caught on fire, and she died in the conflagration.

I want to address something about the fire.  There have been persistent rumours over the years that the fire was deliberately set and that she was, in essence, murdered.  Another relative of mine who lived in Baxter's Harbour, and who is also long dead, was the one who was thought to have done it.   I will not name him.

In speaking with my mother about this a few weeks ago, I think I can rule out that story.  My great-grandmother was exceptionally hard of hearing, and very old.  I don't know how the fire started, but assuming it was an accident, she would have been at an extreme disadvantage when it came to getting out.  I don't think it was anything more than that. 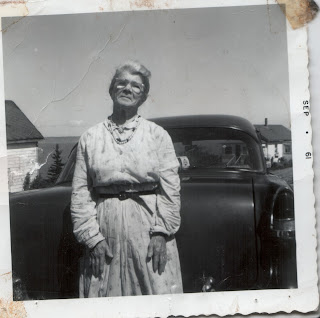 And, lastly for today, here is a picture of my parents back when they were dating, probably around 1952.  Would you like to know the story of how they met?  After all, she lived on the North Mountain, and he lived quite some distance away on the  South Mountain. 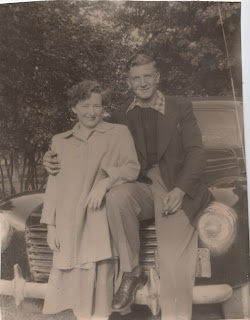 Please tell me what you think of this new series.  I am very curious to know your thoughts regarding my comments about these pictures.


This series will resume on Sunday.  I will produce other blog posts over the next few days.

Bevboy
Posted by Bevboy at 3:39 PM