Welcome to the second chapter in the "Life in Review" series.  I will run a handful of pictures in each edition and comment thereon.  These pictures, and therefore my comments, will be in no particular order.

You are looking at the last reminder of the old Ernest Keddy bursary award.  After my brother died in 1970, my parents and a few other people instituted a bursary in his name.  It was $200 or so.  It was given out to a "deserving student" each year.  Bursaries, by definition, are for students who have promise but don't have a lot of cash.  That is, at least, the traditional definition.  The lines have blurred over the years.

The award was given out until my younger sister graduated and was quietly retired after that.  Of course, the actual school is no more.  I remain grateful that the family was able to reacquire the plaque after the final awarding of the bursary.  If not, it might have ended up in a landfill the way a lot of mementoes from that school did (such was the zeal with which the staff left the place).  The plaque will remain in the family for as long as there is a family.  Maybe by the time they throw me in a landfill, they'll toss it on top of me. 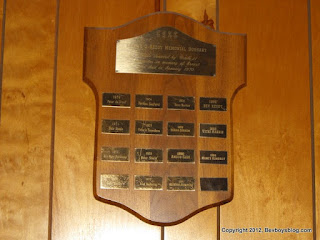 Ah, yes.  This is the little plaque I got in 1985 after I finished my tour of duty at CFB Greenwood, the Aurora Software Development Unit, or ASDU for short.  This was my first job in IT, and one doesn't forget one's first love.  I continue to have warm memories of the place.  I still play "what if" from time to time.  What if I had decided to try military service?  We will never know, of course. 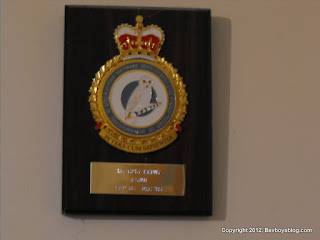 Here's a picture of my father's truck on June 3rd, 1989.  I can pinpoint the exact date because it was the day I moved into my apartment in the South end of Halifax.  Dad had helped me move my stuff.  Upon the drive back home to the Valley, he fell asleep behind the wheel and rolled the truck.  He was driving with his arm hanging out the window like a lot of guys do.  He had the presence of mind to haul his arm in just in time, or he probably would have lost it, and likely his life as well.  The next day was his 57th birthday.   Of course, he would live for another 20 years.


I didn't write about this book in that chapter of the "Year in Review" series, but I remember buying it in 1988, maybe 6 weeks after I moved to the city of Dartmouth.  I didn't know my way around at all.  I would go for drives on the weekends and try to establish my bearings.  One Sunday morning I ended up at Penhorn Mall where they had a fleamarket every week.  This was years before Sunday shopping all but crippled the fleamarket business in the city.

I don't think I had been to Penhorn Mall since I had dropped my friend Robin off there in 1986 following our having worked together at the Bedford Institute of Oceanography.  It was nice to be there again and remember him and that job.  On my way out to my car, I noticed this book and bought it for 50 cents.  Obviously, I still have it.  It is on the bookcase to my left as I type these words.

It was not a good idea to buy this book.  I would read it chapter after chapter about Canadians who had gone missing under mysterious circumstances.  I would be alone in my tiny apartment at 55 Dahlia Street (Apt 208), with the door locked, scared crapless at every sudden noise and creak the building made.  This book affected me in a way that is hard to describe.  It was a right time, right place kind of thing.  I was living in a new city where I knew very few people.  I was alone and felt that way in a profound way.  My salary was such that I could only afford a small, crappy apartment.  And I chanced upon this book that scared me in a fundamental way.

This book and its author ended up winning some awards.  The author Derrick Murdoch is long dead himself (not under mysterious circumstances).  There is a Derrick Murdoch award given out every year for outstanding contributions to the crime writing genre in Canada.  Here's a link about it. 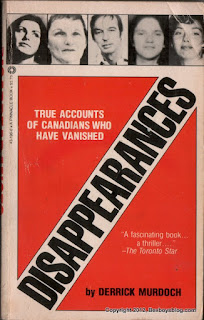 Let's finish off this chapter of this fine series with two vintage pictures of the family dwelling.  My father built this house pretty much by himself.  It was and is surrounded by farm land.  He arranged to buy a piece of land from the man who owned it, for $200.  A princely sum back then.  I do not know why the man sold that particular lot.  He sold no other lots of land to anybody else.  I really must ask my mother about it.

The family, which did not include me or my younger sister back then, moved into the place around December of 1960.  Back then, there was no porch.  What we would call the back door (or side door as you see in the second picture) would take you directly into the kitchen.  I am not sure just when Dad added the porch, but I do not remember a time when there wasn't one.  And you know what my memory is like, folks!

This tells me that these are pictures of the house from the very early 1960's.  In the first picture, there are no shrubs on either side of the front door.  They were planted by my brother several years before he died in 1970.  We cut down those shrubs a month or so after Dad died.  They weren't shrubs any more.   They were small trees that could threaten the foundation of the house.


If it helps, the picture of my grandmother visiting us in the late 1960's has the porch; it is part of the first post in this series   Sometime between 1960 and when I have my first memories, the porch was added.  I will try to find out for you, just when it was.  I know you care deeply about such things.

This was also before the house had a chimney.  What was the heat source back then, and how did heat escape?
In the second picture, in the foreground, you see a fence.  It abutted the property because the owner had a farm.  Over the years, he grew potatoes and tobacco and had livestock running around.  This was followed up by other  owners of the property over the years.  One night many years ago, we got home, and the headlights from Dad's truck alighted on some neighbour kids who were out in the field stealing potatoes under cover of darkness.
In the year 2000, one so-and-so had free range chickens.  They were so free range that she would let them run all over the neighbourhood.  Many of them ended up on my parents' lawn where they would scratch and crap all over it.  We sicced Animal Control on her, and she sold the place not long after.  Good riddance to bad rubbish. 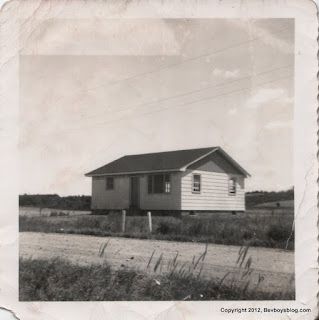 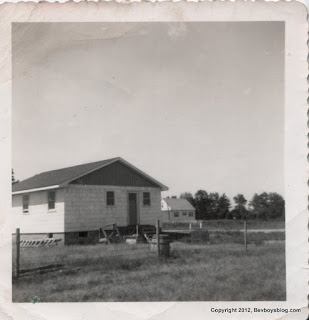 Here endeth part two of this fun series.  At least, it's fun to me.  I hope you like it.  Once again, I look forward to your feedback.

Bevboy
Posted by Bevboy at 5:35 PM