In the last hour, I learned of the death of retired Halifax radio broadcaster Clive Schaefer. 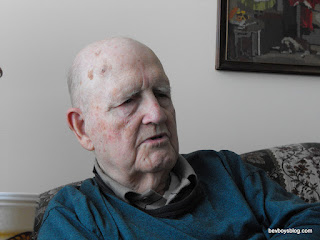 Clive's career began in the 1930's when he was a participant in one of CHNS' quiz shows.  He eventually worked his way into a full-time radio job, most notably at CHNS, but for a time at CJCH, where he worked with folks like Norm Riley.   Norm's grandchild sent me a picture, below, which has Norm and Clive together sometime in the late 1940's. 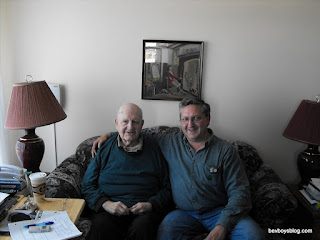 I met  Clive once, in 2009.  Krista Cook, a friend of his, introduced us.  It was a pleasure to sit in his apartment and speak with the man.  He was still able to regale us with his stories, and I remain grateful for having had the chance to meet him, if only the one time.  He wasn't feeling well that day, and I did not do anything with the interview. 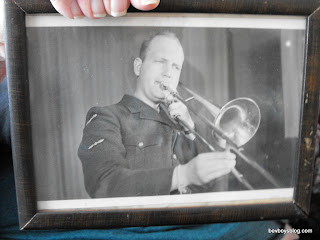 I was playing back one of the audio files just now.  First time I'd played it since 2009.  It doesn't sound that bad.  Clive took some breaks and needed a little verbal prodding to keep focused on the question at hand, but it isn't that bad at all.  I guess I should transcribe the interview, huh?  I don't think he had many opportunities to tell his stories. 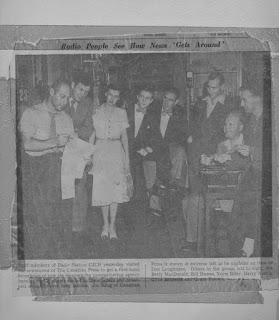 There aren't many of the really veteran broadcasters left.  Don Tremaine.  Pat Connolly.  I am having a hard time thinking of any more from all those years ago.  Now, there is one less, as Clive Schaefer moves on to a better place.

Funeral plans are still incomplete as of this writing.  I will let you know as soon as I know.

I extend my sincere condolences to Clive's family during this difficult time.

bev, thanks so much for your wonderful piece on clive schaffer. (as well as a ton of other material about old friend in halifax broadcasting.)
clive and i worked together at chns in th mid 60s along sith bob oxley, orv pulsifer, "rank" frAnk cameron, , brian sutcliffe and many others whi are still alive and kicking.
can we have a brief chat off line?
my email is mdduffy@aol.com

best r regards and thanks for all you ldo.

Of course, Mr. Duffy. I will email you in a moment!