Welcome to the latest and greatest(?) chapter in the Life in Review series.  For those who came in late, or who have been in an alcoholic stupor for a few weeks, this series is an adjunct, a spin off, of the "Year in Review" series that people found strangely captivating.  I present pictures from different parts of my life, in no particular order, and provide commentary on them.  No biggie.

Here is a picture of the garage door at my mother's.  You will recall that Dad built the garage in 1974, pretty much entirely on his own.  I am unaware of any significant assistance that he required.  He could even do his own wiring.

You'll notice that there is a crack in the window.  I created that crack back when I was 10.  The garage door arrived one Saturday morning.  I started crawling around on the door like kids do.  I heard a crack under my knee and knew better than to admit to what had happened.

For years, decades, this has been a mystery in the family.  My younger sister thought she had caused the crack.  Dad thought he had.  Who knows who else was suspected over the years?  Well, it was I, folks.  It was I.  Confession is good for the soul. 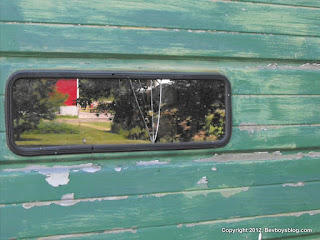 This is a picture taken in 1953 of my parents along with my mother's mother.  She was named Myrtle, which became my older sister's middle name.

My parents were married in 1952.  I know this not because I was there, you silly sausage.  When I presented the eulogy at my father's funeral in 2010, I mentioned that my parents had been married for 57 years.  Do the math.  They were married in November of 1952.  My brother was born a scant 3 months later.  Do the math.

Since this picture was taken when the weather was nicer, and it was 1953, this would mean that my brother had been born, an infant, and you can see what certainly would be his baby carriage in the picture.  The note says it was taken in July, so my brother would have been about 5 months old.

What are my parents doing in this picture?  Working with wood?  Building something?  Praying to an elk god?  I just don't know.  Lost in the mists of time, folk. 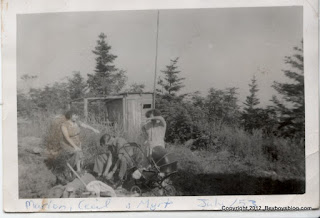 Here's another picture of my parents.  This one was taken in July of 2000, some 47 years later.  It was on the occasion of their visit to Halifax to see the Tall Ships that had arrived that year.  They were still spry enough to be able to get around without too much difficulty.  Nice to see them fairly hale and hearty.

That is my older sister with them in the picture.  You know.  The one with the middle name of "Myrtle". Hee hee.

The green building behind my dad is the old Lighthouse Tavern, which I'm told was the oldest tavern in the city, even older than the Midtown Tavern.  After many years as a regular tavern, it became a strip club.  My apartment was naught but 2 buildings up the street from there.  Did I ever go there?  Huh?  Ever?  It was too degrading to women, and you know how I feel about that. 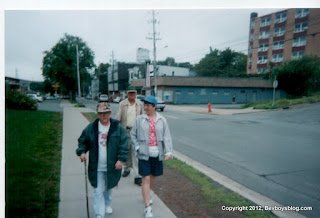 This is a poem I liked very much when I was 11 years old.  I liked it so much that I included it in a book of poetry that our Grade 5 class put together.  As I stated before, the content of the poem sailed blissfully over my head at that age.  But I do wonder what became of "Thea Manning" in Truro.  What made him/her so cynical that he would write such a poem about the holidays?  Even at my most bitter and unhappy, I do not approach the level of negativity that you will find in these verses. 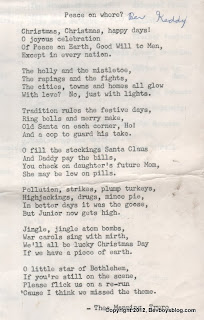 Here's the cover of that poetry book.  We were to design our own cover for it, and the interior poems would be the same for all kids to enjoy, including the one about the "rapings and the fights".  As you can see, I chose to call my book "I'm Different".  Kinda symbolic, isn't it? 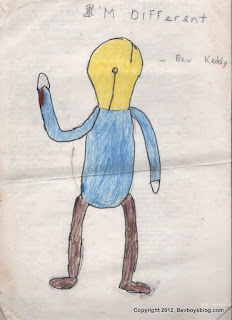 Here's the second poem I selected for this book, this wonderful book with its delightful doggerel. 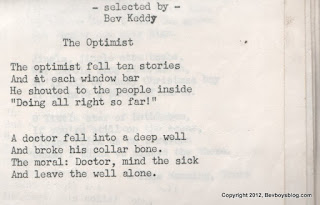 I think that the next edition of the "Life in Review" series will be the last one, at least for quite a while.  I get the feeling that this series is not as well received as the previous one.  For one thing, this is the first edition of the series to run in a few weeks, and not one person asked me when it would resume.

Blog post tomorrow will be about something I have never done before.  You will find out about it... tomorrow!