You are looking at a picture of me on Dawn Sloane's Ecoped.  She let me ride it despite my complete inability to ride anything with 2 wheels.  When I do spin classes, it is a wonder that I do not fall off the device and break something. 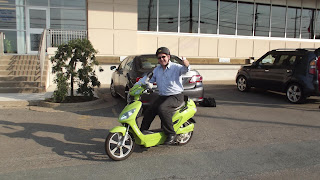 I'm getting ahead of my story.  Let's back up a bit.

I wrote Dawn on Sunday and offered to campaign with her some night this week.  This would entail me walking around with her as she knocked on doors, perhaps carrying her purse while she passed out campaign literature to people who answered the doors.  She agreed.

After work today we met up at Westcliff's on the corner of Bayers and Oxford and had dinner.  I had had breakfast there once before, but never an evening meal.  For six bucks I had a complete roast beef dinner with actual mashed potatoes.  Potatoes that had come from the ground at some point and which had been boiled and mashed, and to which milk and butter and salt had been added, perhaps even with love.  It was an excellent meal, made all the better by Dawn's insistence on paying for it.

We walked her ecoped to a safe parking space and then headed back out to knock on doors.    The folks who answered the door all seemed pretty receptive to Dawn, who is running in a newly-created district.  Her main competition is another councillor.

I don't care what the proponents of this scheme think.  And they don't care what I think.  But, to my thinking, this further reduces, dilutes, and pushes the common folk away from, democracy.  I know who my councillor is right now.  I can pick up the phone and talk to him if I need to.  After the upcoming election, the person who will represent me will all of a sudden be presiding over a much bigger piece of dirt in which quite a few more people live.  What kind of access would I have to my councillor, then?

It also means that councillors are vying for fewer seats.  Dawn is running against 3 other people, with one of them being another councillor.  Dawn could have elected to run in  a similar district representing the downtown, but this district no longer includes where she lives.  She elected to run in this other new district which includes her home and which includes the area where she grew up.  But it means running against this other councillor who happens to be a friend of hers.

This bizarre form of political musical chairs means that a number of good councillors will end up without a seat.  You may not give a crap, but I do.  I am of the opinion that we have a pretty good set of councillors in the HRM, but they are bogged down by trivial matters that they must discuss at great length, and to little effect, which only increases the public perception that these councillors are ineffectual, maybe even incompetent.  I reject these opinions, but part of me doesn't blame people for feeling that way.

Anyway, if I can help out Dawn by running around her new district to help her try to secure a win in the October election, I will do that.  I had a good time tonight knocking on doors with Dawn, and would be willing to do it once or twice again before the October elections if that would be helpful to Dawn.

Several years ago, I attended a meeting in which former premier John Buchanan spoke.  The take away from his talk was that a person seeking election, or re-election, should always have a person to campaign with.  Otherwise, people who answer the door may think that the person doesn't have any friends.  "If he or she doesn't have any friends, why should I vote for her?"  It's a silly perception, but it's out there anyway.  So, tonight, I stood behind Dawn and smiled and said hello when I was spoken to.  I hope I didn't scare any potential voters away.

Dawn, I had a great time tonight.  Let's do this again, and soon!

See you tomorrow, me hearties.

Email ThisBlogThis!Share to TwitterShare to FacebookShare to Pinterest
Labels: DawnSloane