Day Two, already!  Wow!  Who would have thought it?

This one was taken this afternoon at an Oracle presentation I attended today.  The morning session was entitled: Business Continuity, A Path to Success.  The afternoon session was called Oracle Enterprise Manager 12c.  Good times. Good times.

They offered attendees a full breakfast.  Mid-morning we had snacks.  And lunch was a buffet-style affair with chicken and salmon and seafood chowder and salad and desserts.  Coffee and tea all day.  Like I said, good times, good times.

Posing with me is the lovely Annalecia Wilson, Technology Account Representative for Oracle.   She works out of Mississauga.  The presenter is an alleged 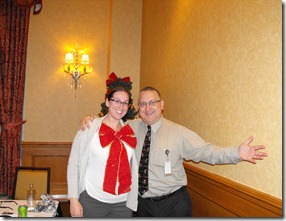 fan of the blog named Dean Margolese.  He claims to love the Blog business card I gave him earlier this year and further asserts he has shown the one card I gave him to a bunch of other people.  This afternoon I gave him some more cards to distribute to people who would care, which is probably nobody.  Wish the production of these business cards were a tax write off.  This crap is getting expensive for me.

(The look on Dean’s face as I gave him the extra cards suggested that he had no idea what the frig he was gonna do with them.  If some homeless folks in the Mississauga area start contacting me at the email address specified on the business cards, then I will know what Dean did with them.)

Every time I see him, Dean goes on and on (and on!) about how much he enjoys eating at the Five Fishermen restaurant in the downtown.  When Anna is in town, where does she eat?  None of my business, but I’m curious, dammit. 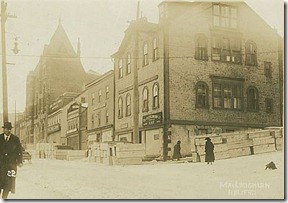 And is there no such thing as a seafood restaurant in Mississauga?  If not, then I think someone there should develop a marketing plan to open such a joint.  Just sayin’.  And does Dean know that the place that houses the Five Fishermen, used to be a morgue?

(Here’s the text from the above photo: Pine coffins supplied to Snow & Co., Undertakers, second building from right, for victims of the Halifax Explosion. (photo Nova Scotia Archives))

Anyway, Anna grabbed a bow off the Christmas tree behind us and put it on in the spirit of the holidays.  Thank you, Anna.  Much appreciated it.

Day Two is over.  Tomorrow is… crap, I forget.  Two plus one equals… wait, just a second.

Tomorrow is day three of the fifth annual Bevboy’s Christmas Tie Extravaganza.  I can hardly wait!