Phew!  This one was a long time in coming and required a great deal of  preparation.  It nearly didn't happen.

If you saw my Facebook this morning, I teased the official Bevboy's Christmas Fifth Annual Tie Extravaganza photo album by putting up a couple pictures of my visit to the Halifax Metro Centre.  I have since put up more pictures. More about that, in just a bit. 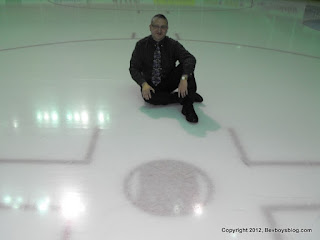 A couple of weeks ago, I asked my readers here and on my FB and Twitter to suggest places for me to get my picture taken, avec a Christmas tie.  Deborah Eaton, who had a massive crush on me in high school and still does if you ask me, suggested (perhaps jokingly) that I get my picture taken on the ice at the Metro Centre.  She probably thought that this was not possible. 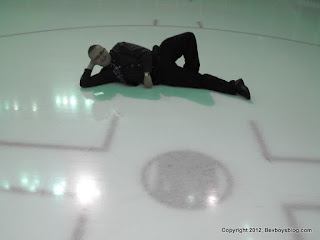 Turns out my Toastmasters club meets at the World Trade and Convention Centre, which runs the attached Metro Centre.  I have a good friend who works for the WTCC, Bev Girl, to whom I proposed my getting my picture taken on the ice.  She smiled that Cape Breton smile of hers (or maybe she had gas!) and asked me to leave it with her.

About the middle of last week, she wrote me at the main email address I use for this blog (it's on every blog business card I give out) and asked to talk to me.  I gulped, thinking that perhaps my opportunity to get this done might slip away from me.  Nope!  She just wanted to know about my availability.  Sweet.  We arranged a date and time. 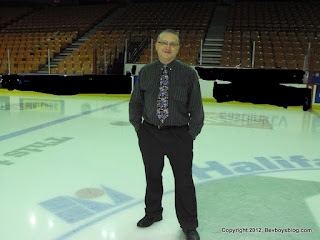 We had a pretty small window to do these pictures.  There was a basketball game at the Metro Centre on Sunday.  They had to flood the place in the morning in order to accommodate the noon-time skaters they host during the Winter months. This would not be done until 11-ish this morning.  We had to go out on the ice, do our thing, and skedaddle by 11:15 or so to make sure that the ice was pristine for the skaters who would soon arrive. 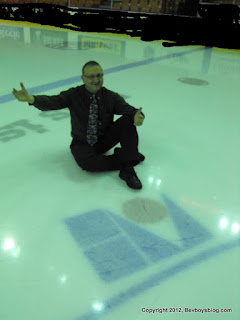 I left work around 10:40 with the full intention of calling the Guinness Book of World Records to report myself for taking the world's earliest lunch hour.  Finding a parking space on Brunswick Street, across from the WTCC and the Metro Centre, was child's play.  Tons of parking downtown for a change.  I rendezvous'd with Bev Girl around 10:55.  She led me through the bowels of the Metro Centre ... 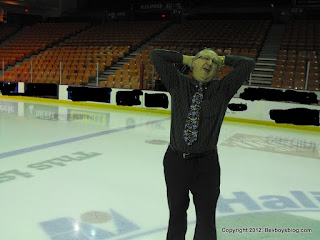 Waitaminnit.  Why do people always call it "the bowels" of some place?  Such a cliche.   And it seems disrespectful some how.

How about ... the sphincter? 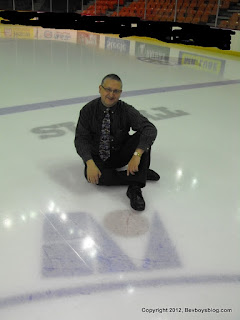 She led me through the sphincter of the Metro Centre.  I saw parts of the building that most people do not get to see.  A man named Kelly came over; he was the one who granted permission for me to even be there, so I was extra nice.  Bev Girl and Kelly directed me toward some curtains, which led to a door  that the hockey players use to go on and off the ice.

We got on the ice.  I feared I would fall ass over tea kettle, but that did not happen.  I just made sure to tread confidently and was fine.  I am not sure how I would have managed had I been wearing a pair of Patricia's heels. 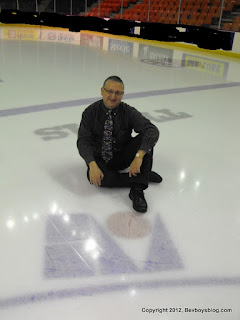 (Did I just write something about wearing Patricia's heels?  Can it be our little secret?  Thanks!)

Bev Girl ran the show,  suggesting areas where I should stand, sit and recline.  We took 10 or 12 pictures, most of which you're seeing here.

A note about some of the backgrounds.  For various legal reasons, it was strongly suggested to me to make sure that they be cropped or blurred out or something.  As you can see, I used my mad image editing skillz to fill them in with the electronic equivalent of a magic marker.  Very professional, huh?  It's just because it's late and I don't have the time to fart around with learning something like Gimp, so I made do with a linux app called GNU Paint which offers a far more modest list of features.

All too soon, the fun was over.  Someone I guess was from Security was ambling over wanting to know why the hell some guy was writhing around on the ice like a beached whale on a hot summer's day.  Bev Girl smoothed things over,  He became friendly and we shook hands.  Of course, I gave him (and Kelly!) a blog card each. 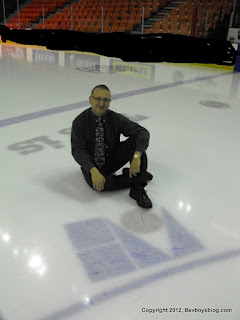 I hereby thank unreservedly Bev Girl for arranging this visit to the Metro Centre.  Anybody at the World Trade and Convention Centre who was aware of this silly thing I do, and allowed it to happen, has my undying gratitude.  In 5 years, I can't think of a more challenging photo opportunity to set up, and it is all because of these fine folks, who have taken far too much heat in the news lately, undeservedly.  Thank you, thank you, thank you.

How do I top this one?  I don't know.  I just know that I will be visiting a friend tomorrow.  She is the subject of one of my interviews.  And I can't wait to see her again.

See you with that little story, tomorrow!