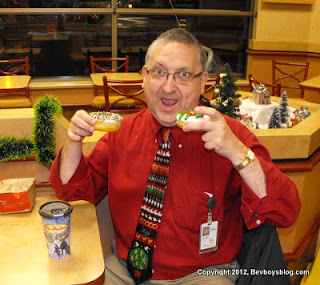 This series of pictures was taken earlier this evening at the Tim Horton's in Timberlea, not far from where I live.  The original plan for a picture fell through at the last minute.  Drat! 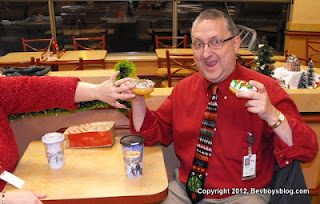 We got to the Tim's.  I figured I would just get a picture or two of me eating a festive donut.  All of a sudden, Patricia started to reach for it out of camera range. 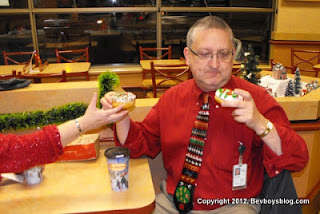 We ran with it.  With one hand, Patricia was taking the pictures while I fought her off and prevented her from wresting the donut from my cold, clammy fingers.  I would give her no quarter.  I would not give up.  Sirrenderr is not in my vocabulary.  See?  I can't even spell the word! 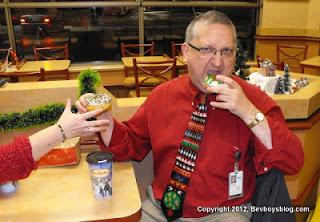 She persisted, head faking me.  I dodged  and snapped the donut away from her and prepared to stuff it into my gaping maw. 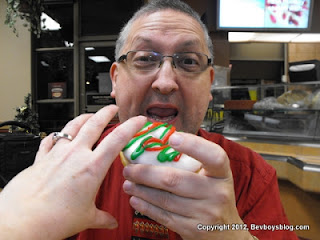 She would have none of it.  With her left hand, the one with the engagement ring on it, she reached with all her might.  She's so close.   So... very... close! 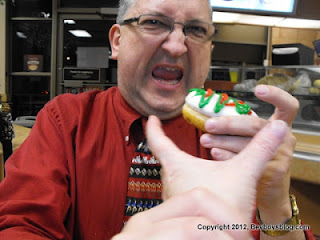 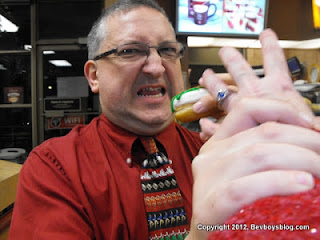 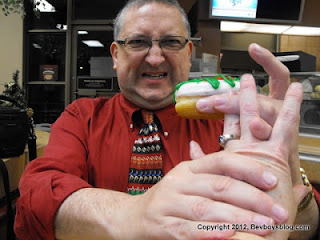 That is it for this year, folks.  The Fifth Annual Bevboy's Christmas Tie Extravaganza is over.  I have had a great deal of fun putting it together.  It has often been a challenge, and a few of the ones that took place, nearly didn't.  For example, I had a 15 minute window on Monday to get those pictures taken on the ice.  There were also short windows of opportunity at the radio stations.

Finding new and different locations to get my picture taken in with yet another Christmas tie, gets harder every year.  I am pooped.  Done. Spent.  And I need to pee.  But that can wait until I finish writing this post, dammit.

This has been a team effort.  It has been each year, but especially this year.   It is incumbent upon me to take a moment to acknowledge and thank the following people:

Tim Horton's, Timberlea.  I didn't get the name of the girl, an assistant manager or something, who took some time from her duties to take this evening's pictures.

Steve Rabbat and Natalie at The Metro Deli, Young Street.  Best coffee in town.  Home of the $2.50 Tuesday breakfast.  Check it out.  Tell them Bevboy sent you.   Yes.  They know who I am.  Maybe they'll hire me to do commercials for them. I work cheap.

Annalecia Wilson of Oracle Canada.  She grabbed a ribbon off the Christmas tree behind us and affixed it somehow to what she was wearing.  And she took the time to read that post and to write me back.  I hope your gestation period results in a healthy baby.  I mean that.

The people at my work who tolerated this activity and sometimes encouraged it.

Kate Milton and Debra Lee Smith from C100.  Kate had voice tracked a break to give me time to come in and pose with her.  Nice to see both lovely young ladies.

Brad Dryden, Peter Harrison, and Moya Farrell, also from C100.  They were playing a long music set, but not so long that they could spare a lot of time.  Morning show hosts are hopping from when they go on the air, to when they get off.  Thank you for taking a few minutes to let me in studio last week.

Jaclyn Irwin (a.k.a. Jax) from the Bounce.  Best hugger in the world.  She nearly broke one of my ribs yesterday.  But it would have been a good way to go.

Bevgirl of the World Trade and Convention Centre.  When I told her that a Blog reader had dared me to get my picture taken at centre ice at the Metro Centre, she pulled some strings and made this happen.  She even took the pictures.  And, yes, my ass did get cold that morning.

The manager of the King's Palace on Quinpool Road. Really good buffet, folks.  You have to go.  Most interesting and tasty egg rolls I've ever had.  Look like cigar butts, but they're delish!!

So, should I do this again in 2013?  After this year's, I don't know if I could top myself or not.  I would need lots of encouragement, a groundswell of support, entreaties, to get me to do this again next year.


Also, what was your fave tie picture this year, or fave tie "day", or scene?  I would like to know what I did well, and where I can improve for next year, if I decide to do this next year.


I am on vacation starting now until January 2nd, 2013.  I will continue to write blog posts throughout the holidays.  Fear not, effendi.  You will have your Bevboy's Blog posts!  I love you too much to stop.