I kinda spilled the beans on my Facebook on Tuesday.  I was so excited by this final entry that I couldn't help but share it.

I arrived at work on Tuesday morning to find the following picture in my cubicle: 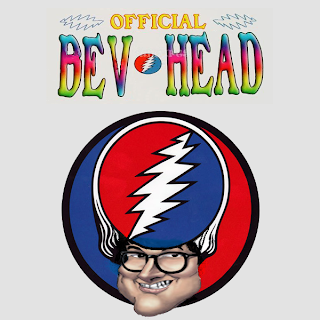 Of course, it is a parody of the Grateful Dead's "Dead Head" emblem:

Anyway, I was so delighted by this entry, with its suggested name for what to call my readers, that I closed the contest a few hours early, knowing that this entry could not be topped.  I'm the judge, and my decision is final.  Frig you.

My logo was designed by Michael Gillis and Steven Zinck at my work, during their lunch hours I hasten to add.  The name "Bev Heads" was also suggested by Marcel Pothier when he should have been spending, ahem, quality time with his girlfriend.

As promised, I am taking these winners out to lunch.

Here's how it works.

Seriously, guys, thanks very much for your hard work.  It is much appreciated.

Going forward, the Fans of Bevboy's Blog Facebook page will have the official "Bev Head" logo.  I may even change the name of the fan page to go along with the logo.  I'm so excited!!

always knew Steve was a Graphic Artist at heart....