Several months ago, I was invited to be interviewed at the Waterfront campus of the Nova Scotia Community College.  My new friend Andrew Chiasson was working on his major project, about radio DX'ing.  He wanted insights from jocks, and me as well.  I guess I'm an easy touch. 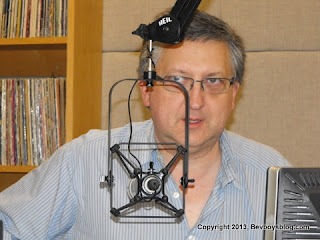 For those who don't know, DX'ing is when folks sit at home and listen to their radios to see what far away stations they can pick up.  Due to the vagaries of signal distribution and things like atmospheric conditions and so on, the best DX'ing can be done with  AM radio stations, in the evening, or early in the morning, in the cooler months of the year.  Since most radio stations stream their content over the internet, I am not sure who bothers to DX any more.

If you are wondering why this is called DX'ing, it seems to come from DX, the old telegraphic shorthand for "distance" or "distant". 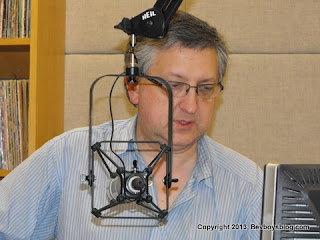 Patricia and I hied ourselves there in early April.  Andrew met us and escorted us through the Radio/Television department, where they apparently have state-of-the-art facilities that are oftentimes better than what the graduates end up using when they secure employment. 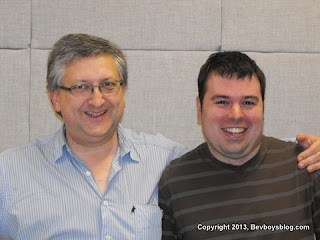 Andrew set me up in the studio with my headset and microphone.  Patricia was next to me in studio taking pictures.  She could hear what I was saying but not what Andrew was saying, because she was not wearing a set of headphones. 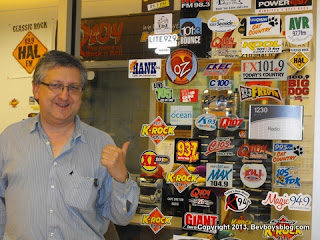 It was great fun for me.  I got to talk about the history of DX'ing, and how it goes back to the 1920's.  It was a popular enough pass time back in the day to cause the coining of the term "radio liar".  A radio liar was a person who exaggerated about what stations he could pick up on his radio.  Remember, this was back in the day of the old crystal radio sets, where people had to listen to radio with headphones.  You had to take his word that he could pick up the stations he claimed to. 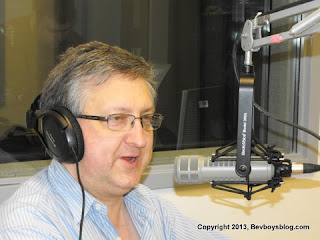 (The existence of the term "radio liar" makes me think that quite a few, maybe even a majority, of the stories you used to read about people picking up radio stations from an exceptionally long distance away, were so much hooey.  People read about how Great-Grandfather Joe, living in California, could pick up the signal of the old Acadia University radio station in Wolfville at night, and accept it as gospel, when he could have been just pulling people's leg, tugging at their tibia, yanking on their femur.  Of course there is no way to prove or disprove this claim today, so at best I have a gut feeling about this, and not even a theory.  But I digress) 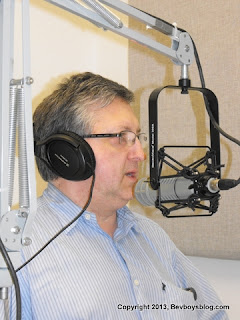 Anyway, I talked about the DX'ing I had done, and still do.  I still enjoy picking up American radio stations at night and in the morning when I am driving to work.  For example, at 55 minutes to the hour, and 25 minutes after the hour, I love listening to Joe Connelly's business reports on WCBS AM in New York, 880 on the AM dial.  We have exchanged a few messages via twitter; he has family from Newfoundland.    I think I am still digressing. 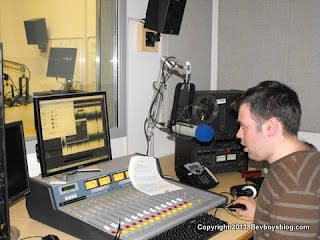 I talked about DX'ing and what it meant to me, and what it still means to me.  I mentioned how picking up a radio station on your actual damn radio was a more honest and visceral and satisfying experience than just streaming it from your computer.  I likened it to walking into a used book store and finding a book you had sought for many years.  Yes, you could have gone to the Able Book Exchange and ordered it.  You could have downloaded it to your e-reader.  But there is something more satisfying about finding a book, or picking up a radio station, than can be obtained by the other methods I just listed.  You may or may not agree, but this is my Blog, darn it.  Get your own and refute me if you want. 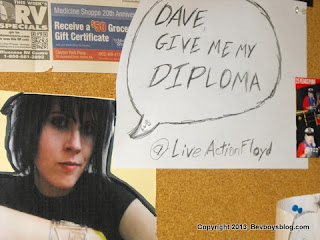 Afterward, Andrew showed us more of the sights, and I got my picture taken in front of a bunch of radio station decals.  I saw a picture of Floyd from Live 105 demanding her diploma from Dave Bannerman.  Hello, Floyd.

All too soon, we left.  Within days, Andrew was working at a station in Ontario, but returned home to graduate in June.  I wish him well.  I would like to listen to his show.

I guess I'll just have to cheat and dial him up on the 'net.

See you tomorrow for the first part of a two part major interview.  I think you'll like it.

You may not be aware that I am a ham radio operator, although inactive. As a side hobby I am also a radio DXer. My main interest in that hobby is international short wave radio and I have a receiver that was pretty well top of the line when I purchased it years ago.

It's great fun to listen to international short wave to hear the spin put on world issues and events by other countries.

I often sent reception reports to the stations that I heard and they usually responded with a postcard size/style card confirming my report. They sometimes even sent small gifts like national flags or pennants or other memorabilia. I don't know how active the hobby is these days, but it was fun then!

Just looked it up and, although there are lots of English broadcasts, Radio Canada International has been shut down due to budget cuts. That's a shame.

So, I was an SWL (short wave listener) and you are an MW DXer on the MW (medium wave - AM Radio) band.

Thanks, Ken. Glad you liked it. DX'ing is something I have done since I was 10 years old and I got my first radio. Of course I had no idea it was called DX'ing at the time.

It's cool that you have those cards. There is a name for them, but it is escaping me at the moment.

Will be in the Valley for a week in a couple of weeks. Coffee?

The name for the card reporting and acknowledging reception is QSL cards. And yes, let me know when you are in the Valley and we will get together for coffee. I will look forward to it!