I still can't confirm what morning show team was let go this week, but you can find out by going up and down the dial until you hear folks you don't recognize who don't say that they're filling in for that fabled team.

Meanwhile, Newcap recently registered the following domains: Amp965.com, KRock965.com, KixxCountry965.com, Ocean965.com, and Radio965.com.  No other stations in the Newcap chain broadcast at 96.5FM.  That should tell you something.

KIXX Country was a fairly popular country format for Newcap for several years in Hali.  It broadcast on the AM dial.  There is but one Country station in this market, to the mystification of an awful lot of people. It would make sense for Newcap to try this format.

Bamboo shoots under my fingernails could not drag this person's identity from me, but I am aware of a new hire at that station.  This person would not lead me to think that Newcap is leaning toward a Country format.  Quite the opposite, actually.

The K-Rock format is pretty much a classic rock format.  There is no way that it would go down that road and compete with Q104, pretty much competing with itself.  We would have another C100/The Bounce situation, where there is a ratings split and neither station gets an ideal rating.

The Ocean format is similar to what you hear on Lite 92.9.  I can't see that happening.

Look at the "Amp365.com" domain.  The AMP name is what Newcap uses for its alternative/modern rock format, except in Calgary, where it is a Top 40 type thing.  But that station is for sale, so don't read anything into that.

My speculation is that sometime between now and September 1 when the ratings period commences, classic hits KOOL FM will cease to exist and become an alternative rock station.  Q104 will likely shift away from the Classic Rock/Modern Rock mixture back to a full Classic Rock format.  This will put them toe-to-toe with Hal FM.

The billboards for HAL FM no longer show the familiar Hal logo.  I've heard there will be news about that fine MBS station in the next little while.  I think it may be telling that the equivalent MBS station in Saint John recently changed format to KOOL 98, becoming a classic hits station (their morning guy is the excellent driver and professional scab Troy Michaels, aka Troy Swinamer, who is taking the job of Gary Stackhouse while Mr. Stackhouse is on strike against MBS to get a living wage).  Will the same fate befall HAL FM? After 7 years of gaining little traction in the market, my gut tells me "yes". 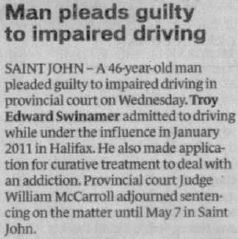 I know I go on about this stuff to the weariness of many, but I take an interest in the radio world in the same way others go nuts over discussing sports.  It is a topic of endless fascination to me, and I can't hide it, so why bother trying?  Typically, radio stations whose ratings are in a downward spiral will undergo some kind of format change or a modification in their programming to reflect what the owners think will prove more popular than the stuff they're shedding.  The to'ing and fro'ing of these stations as they adjust and accommodate for the competition is also interesting to me.   To nobody else reading these words, but interesting to me.  And it is my blog.  My 4.7 readers will just have to humor me from time to time.

I'm sorry that the fans of KOOL FM will likely be disappointed in the next several days.  However, it is looking as though something pretty similar will take its place elsewhere on the dial.  Meanwhile, another station will likely change its format to complement its sister station.  And, for all I know, another station or two will make some mods to its format in the next 10 days or so.

Bevboy
PS.  My best to Morrissey Dunn at Big Dog FM as he leaves radio and goes on to other challenges.  Loved talking to you back in 2009.  Let's do it again soon!

Ah Bev, please think of those of us who do not live in Halifax anymore... How can we figure out which morning team is gone without access to the dial?

You are saying that this team is no longer on air... Can you at least tell me if that station has already deleted that team from their website?

I also see that two Halifax stations are advertising morning show co-host openings on Milkman's job board... Am I getting warmer?

Gary, I have made some changes you should like better.

And, Marc, I discussed the new domain names Newcap registered and how I was speculating how KOOL FM would disappear sooner rather than later. In the particular case of that station, the old morning team is still listed on the old website, yes.

I really don't want to get anyone in trouble here, but it is obvious from listening that the morning team is no longer there. They are not allowed to talk about it until the format change takes place. And I still feel it will be an alternative rock format, and my belief is backed up by the speculation of others.

Live 105 is advertising for an interim co-host so that Jeff Cogswell can recover from the disease that nearly killed him. I think the other one you're referring to is at the Bounce. Ana Almeida left that station to go to work for Live at Five, or whatever it is called these days, on CTV.

Ah, Bevboy has pinned down! Let us not forget that local popular broadcaster, Bill Hart is now back in the HRM, doing mornings on 89.9! In Saint John, MBS flipped two of their stations last week…. "Big John" flipped over to KOOL 98 and CFBC went from Greatest Hits to Country. Here in our province they flipped Amherst’s CKDH to country. Cheers! Wayne Harrett

Thanks Bev for the clarifications. I had interpreted your post as that it was a morning team on a station other than KOOL that had been let go.

The CKDH switch is really recent, I was in Moncton just weeks ago and getting it clear on FM there, and it was still the Lite Rock format.

Monday the 26th should prove to be a very interesting day in Halifax radio. I am looking forward to it.