There is a woman who owns one of those little sub-sub-compact cars, the kind where they give out little red round noses to every new buyer.   This woman realized last year that she could park her car in front of the legislature on Granville Street, wedging her vehicle between two other vehicles that had paid for parking spaces, because her car was small enough to do so.  This would result in the people who did pay for parking to have to struggle to get their automotive conveyances out of their parking spaces without hitting her circus-related car. 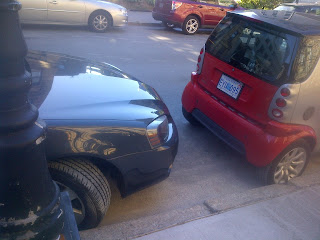 As you might imagine, she is a polarizing figure.  For every person who think she's sticking it to the man, there are 10 others who are out for blood.  My favourite comment on the CBC message boards was to the effect that if she got behind or in front of their car, that they would wrangle some friends to pick up her car and put it on the sidewalk. 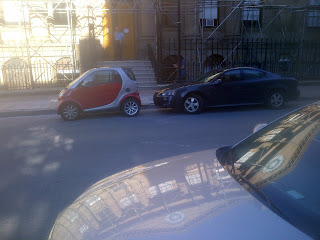 This woman, whatever her damn name is, took great umbrage at these negative comments, thinking she was being threatened.  She probably didn't go to the police because they would tell her that she couldn't park there to begin with.

Anyway, when I drove to Toastmasters this evening, I ended up having to park behind this vehicle.  The space between the car behind me and hers was compromised because she was straddling two parking spaces in an effort to park at no cost.  I used my mad parallel parking skills to get into the space, but it was very tight; the ass end of my car nearly ended up in the next parking spot because of her.

I took a few pics of her car to show you how close we were.

After the meeting was over, I drove two women in my car to where they needed to be.  They saw my vehicle jammed in there and expressed negative sentiments about her shitbox.  For all I know, she may yet be parked there.

She took a lot of heat for her behaviour and attitude last year.  Yet, she persists in parking there, which says a lot about her attitude and degree of self-absorption.   She is a sociopath.  She just doesn't care about anyone other than herself.

Why the hell don't the parking nazi's who slither and skulk and ooze their way throughout the downtown, ticket her out of existence?  They should ticket her car every day.  If she doesn't pay those tickets, then the government can refuse to do any business with her, up to and including declining to renew her license.

How long will it be before she, in an effort to finagle her car into this virtual parking space of hers, hits another car? 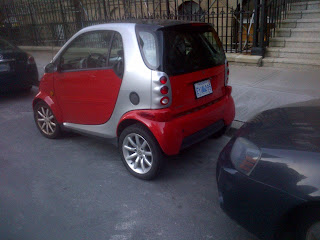 How long will it be before a vehicle legitimately parked on either side of her accidentally-on-purpose hits her car and just keep on going?  Given the visceral reaction people have had toward her scheme, I am surprised it hasn't happened yet.

Ah!  I feel better getting this off my chest.

How do you guys feel about people who flout the rules, who think that these rules do not apply to them, who just don't care about anyone other than themselves?