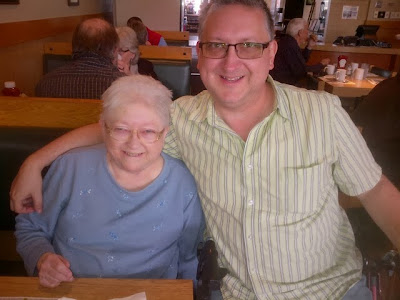 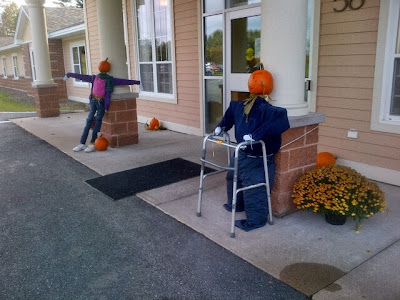 I arrived here late Tuesday. In addition to finding stuff to toss out for the semi annual Fall clean up here tomorrow, I was running the roads with my mother.

She uses a walker to get around these days, but there is something about the prospect of shopping that invigorates her in the same way the 2011 federal election energized the late Jack Layton. We went to the drug store, to the Giant Tiger, and then to have lunch.

She has a way of asking people to do things without really saying the words, to make the decision seem to be your idea. Before I knew it, I heard myself say, "Would you like to have lunch at the Big Stop?". She allowed as that would be an acceptable choice.

Long-time readers will perhaps dimly recall that I refer to the Irving Big Stop in New Minas as The Old Gummers Restaurant. I do that because it is not a very good restaurant. They serve large portions, but they're not designed to be eaten, just weighed and admired for their value. Also, an awful lot of older people flock to the place, perhaps because it has an extensive senior's menu and the food is not spicy or demanding or innovative to any degree whatsoever.

Anyway, we ended up there. I had a passable meal. I also had a vanilla milk shake, mostly because I hoped that my lactose issues would punish me for having darkened the doorways of the joint.

I got our server to take the picture that accompanies this post. It is a nice one of me and my mother. I'm told we have the same smile.

After lunch, we came to the house. Mom uses this place to store things that won't fit in her room, so she wanted to swap her summer things for her Winter things. I dragged out an ancient mattress and box spring. We decided I would toss out an old reclining chair whose springs are toast. I will also get rid of the world's crappiest vacuum cleaner. You may think you have the world's crappiest vacuum cleaner. You don't. We do, at least until it is picked up on Thursday.

We returned to New Minas for more shopping before I took her back to her room. She had been looking forward to the new magazines I had lined up for her. A woman in Halifax, a voracious reader, unloads a few shopping bags of magazines on me every three or four months. They would just be recycled otherwise or take up room in her place, so she happily gives them to my mother, through me. This lot mostly consists of recent issues of The New Yorker.

Mom was excited to get them. She's become a prodigious reader since she moved to her nursing home. She quizzed me this summer about fair trade coffee! She has a lot of mags to get through. Nearly all of them came to me at no or extremely little cost. I'm delighted to pass them along to Mom. And she's thrilled to get them.

After returning to the house, I napped. After I got up, I disconnected the bed frame the mattress and box frame had been connected to and then started filling a couple blue bags and a clear bag of stuff that are going out in the morning. I found a couple of rusted fold up summer chairs that are going bye-bye. It is now pushing midnight and I think I will turn in.

After all, my mother wants to go shopping tomorrow.

See you tomorrow, assuming I survive the day.

From Bevboy's BlackBerry to Bevboy's Blog!
Posted by Bevboy at 7:52 PM