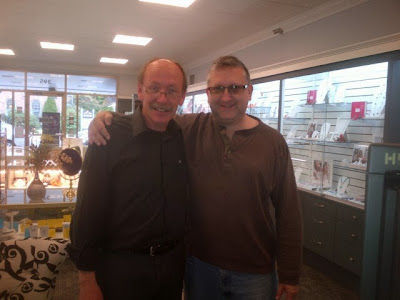 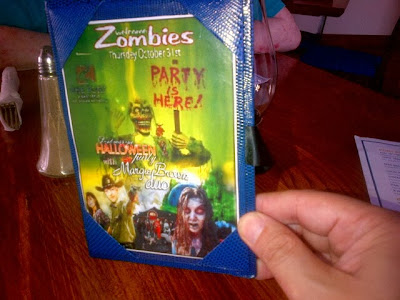 I remain in the Valley. As things stand, I plan to return to the city Saturday morning.

I've stayed longer than I'd planned because I needed to get my car's oil changed on Thursday. While up on the hoist, Sheldon at Under the Hood Auto reported there was quite a bit of surface rust on the car. He referred me to a place called Eye on Detail.

I called that place this morning. Unbeknownst to me, a gentleman whose car was scheduled for work became ill and had to cancel his appointment, creating an opportunity for me. Right place, right time. My car would be under coated at 1:30.

I spent some time with my mother at her nursing home, playing Lexicon with other women. Lots of these very elderly women are sharp as tacks. I didn't take her to lunch today as we'd gone to the Port Pub in Port Williams on Thursday.

I still had time to kill before my appointment, so I went to Reid's Jewelers in Kentville to have my watch looked at. Turns out that it needs a good cleaning. It was my father's watch so I will get that work done.

While there, I renewed my acquaintance with Bev Steele, who's worked there for many years. Bev is part of a small club, which is to say Bev is a boy like me.

We went to the same high school, graduating two years ahead of me. We know many of the same people. He filled me in on some other guys in the area, living and dead, named Bev. I knew, or knew of, most of them. One was Bev Wade, a very long time fire chief in the area. I remember reading about his exploits as a child. He was well known and admired enough to have the corner stone at the New Minas fire hall named in his honour. Of course, it is still there for anybody to see. Too bad it only states his initials and not "Bev".

I got my picture taken with Bev Steele. Enjoy it, will you?

Anyway, I won't have Dad's watch for a few weeks. I pulled my former watch out of its secret hiding place and had a new battery installed. I will wear it until I get my main watch back.

I drove to my car appointment. Had lunch at the Old Gummer's restaurant because it is in front of the car place. By the time I was finished, so was my car.

Returned to the house. Spent some time in the garage and then in Dad's workshop before taking a nap.

Tonight I watched the first Predator movie for the first time in many years. I will turn in shortly. It's been a long day.

From Bevboy's BlackBerry to Bevboy's Blog!
Posted by Bevboy at 6:57 PM