I have finally got around to downloading the 102 pictures I took over the weekend at Hal-Con in Halifax. Nearly all of them will be on my Facebook page, so if you have a hankering, then go ahead and go there. The following is a representative sample. 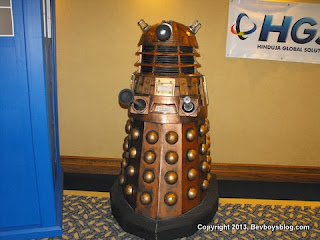 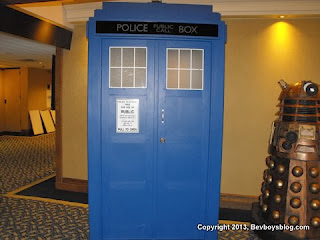 The Tardis, of course. But you watch Doctor Who, don't you? 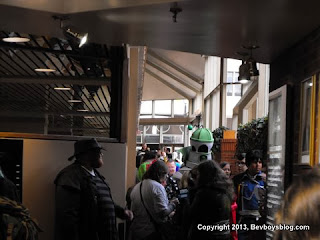 A small idea of just how long the line up was on Saturday. It extended all the way out the door and up the hill to Brunswick Street at one point. Should I tell you that, as a volunteer, I could come and go as I pleased, except maybe during that period, so I mostly hung around the volunteer room? No.  I should not. 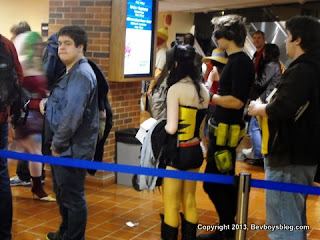 Uh, what character is the girl in yellow supposed to be? 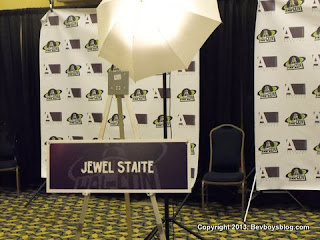 Jewel  Staite was one of the major media guests. She was on Firefly among other shows. 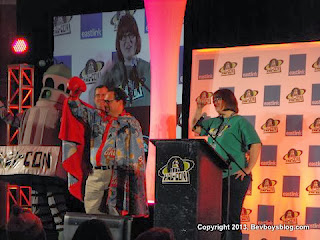 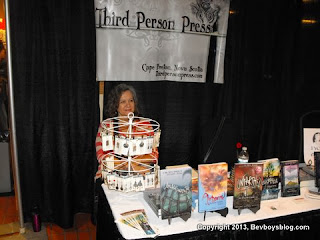 An example of one of the many, many vendors there this weekend. 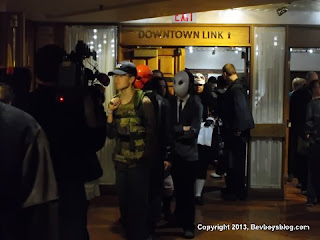 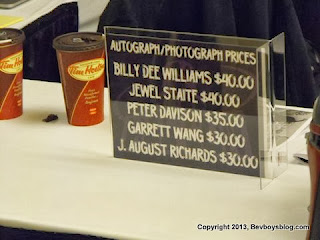 No. Pictures and autographs with the stars were not free. This is one way for them to defray the costs of coming here. 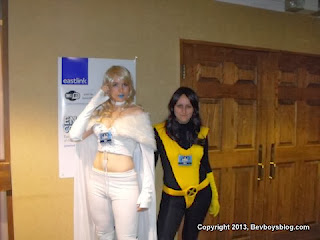 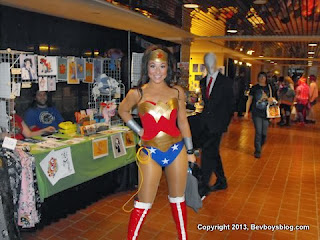 Lynda Carter's stand-in. Or not. 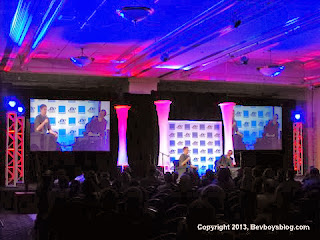 Ajay Fry talking to Mark Askwith, a producer on Space's "InnerSpace" show, must-see viewing in the Bevboy household every weekday evening.  (Askwith has had a pretty neat career and is highly respected in the genre. Read his wikipedia article.) In fact, I have the show on whilst I type these words. They did reveal a dash of information about the 50th anniversary special for Doctor Who. It will run at 2:50pm on November 23rd. An extremely odd starting time, but it must be simulcast in 23 different countries, and Canada has 5 different time zones to take into account. Folks in BC will see it on Saturday morning. It will run sans commercials. And immediately after the show is over, there will be a live edition of InnerSpace which discusses the special. 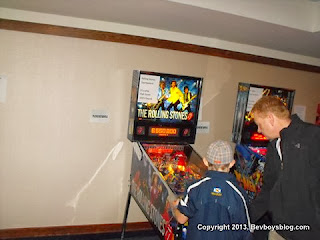 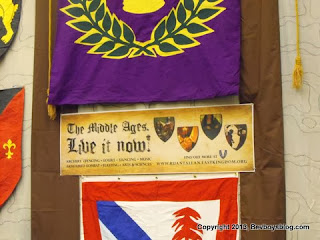 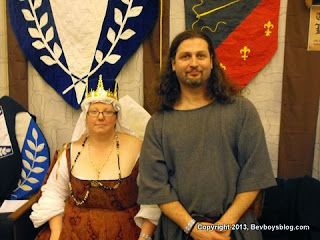 SCA looks pretty neat.  I have always respected what they do. They were probably the first cos players. But, man, I can see that being an extremely time-consuming activity. 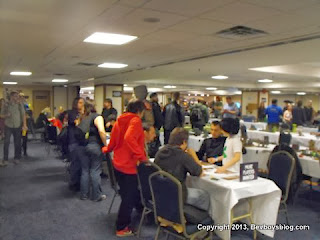 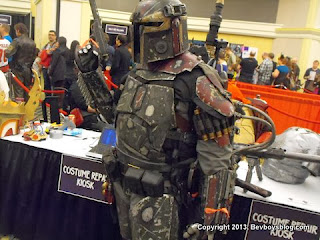 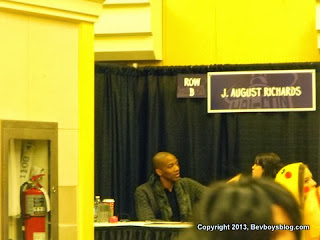 J. August Richards signing autographs and posing for pictures. Do you remember him from the late-and-lamented Angel series, starring David Boreanaz? He was also in the first episode of "Marvel's The Agents of Shield" a month or so ago. I have already bailed on the show, so I don't know if his character has been back, or is coming back. 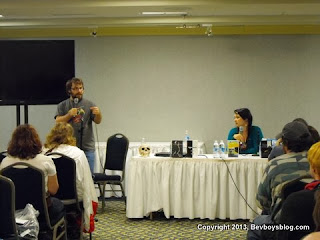 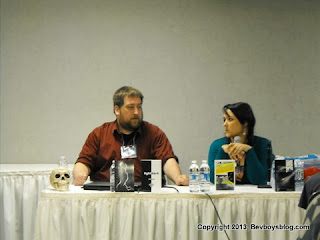 The last two pictures include Ellen Curtis, a local horror writer, talking about writing with some colleagues of hers and taking questions from an enraptured audience. The world is full of people who think they can write. But they don't have time. Write, people. Make time. Works for me, although this is just a friggin' blog and can't begin to aspire to the heights of fiction. But discussing the art of writing is not something that overly interests me. The only advice I have followed over the years is to shy away from adverbs. Lots of good writers hate them. I agree that they can get in the way of the story you're trying to tell. You will not find many of them anywhere in the last 2505 blog posts. 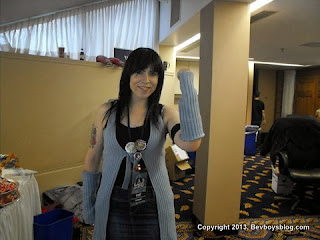 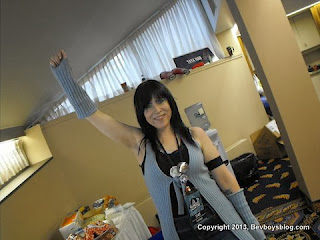 My friend Floyd from Live 105. She was a volunteer this weekend, and decided to get in costume as... well, I am not sure what that character is, but a colleague from my work had a mini-me version of it and gave it to her. A quick story: they delivered a couple of small gluten free pizzas to the volunteer room. Knowing her issues with gluten, I got a couple slices and took them down to her at the registration desk. She hugged me in gratitude. Made my day. 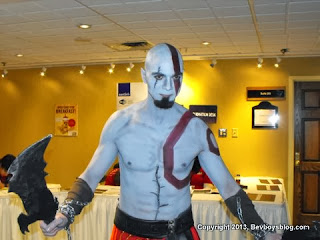 Help me out. What character is this? 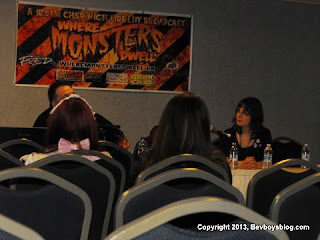 "Where Monsters Dwell", besides being a name for a hella cool 1970's Marvel black and white magazine, is also the name of a regionally-produced-comics-related podcast. Here's the link. I have never had a chance to listen to it, but they get pretty good guests. 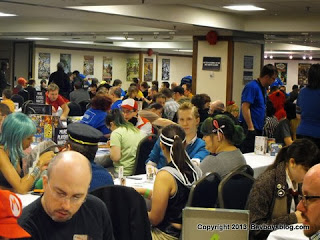 Another example of the games room on the third floor.

I took many  more pics than that.  These plus more will be on my Facebook sooner rather than later.

I have a general comment. Some people reading this post or looking at the pictures will think the people therein are daft. They dress up as comics characters for frig's sakes. Some of these people will then think nothing of attending a hockey game or whatever, having removed their shirts and painted themselves to resemble in a vague fashion, the team they're fans of. I have always wondered how the players felt about these people. Admiration? Respect? Pity? Embarrassment? I doubt even Rob Ford would do that. So get over putting down folks who, once a year, like to put on a silly costume and spend time with other people who want to do the same thing. Or who want to dress up as Wonder Woman. Or Emma Frost. Or someone from Elfquest. Or whatever.

You guys have a good evening.  I will see you tomorrow.