Today’s pictures were taken in the newsroom of News 95.7. The lovely and talented Brynn Langille agreed to pose with me, if I only bought her a bottle of cranberry juice in return. This was done, and the pictures were taken. Best $2.50 I ever spent. 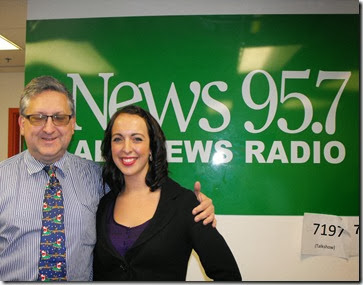 The slots are filling up quickly for 2013, folks. There will be more radio-related pictures, plus pictures of moi with friends and relatives of mine. And, in the last hour, I booked a lunch meeting with Andrew Douglas of Frank Magazine. I will write more about that, when the meeting happens. Just so you know, though, that the pictures taken from my blog and Facebook and used in the latest issue were a mistake, and I will be credited therefor in the next number. Andrew Douglas has always been fair to me, and that is all I ask. 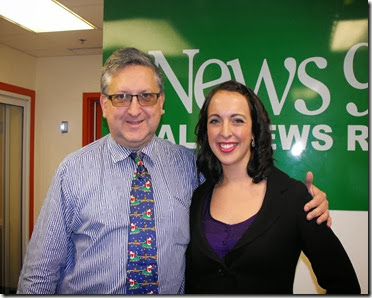 Anyway, Frank says that Brynn is too lovely for the radio. I am far too much of a gentleman to weigh in on this issue, I will only state that she is a lovely person in every sense of that word. If I were younger, and thinner, and had all my teeth, and a good job, and were a member of the same species; and she were single and not-at-all-choosy, I might ask her out. Odds would still not be in my favor. Sigh.