Hello, my lovelies! How are you this evening?

Today's Christmas tie pictures were taken in downtown Halifax at the Nova Scotia Progressive Conservative Party Headquarters in the Bank of Montreal Building on George Street. Please note that this is not the caucus office, which is down the hall. Don't make the same mistake I made and go to the wrong office. At least Jamie Baillie waved at me and said hello. 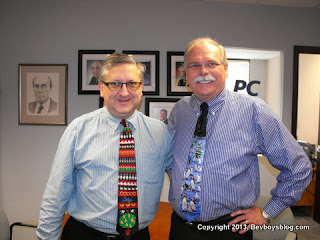 Anyway, you are looking at me and my friend Jim David. He is one of the 4.7. He claims to read my blog every day, even when on vacation. It was nice of him to say that.

We talked about some of the former Tory premiers and MLA's in Nova Scotia. Of course, he would know many of them by name, and many of them he could call friends.  Of particular interest to me was Robert Stanfield, referred to by many as the best Prime Minister Canada never had. I was too young to remember his having been premier of Nova Scotia and when he became leader of the federal opposition. I do remember, however, when he spoke at my university convocation in 1988. Mr. Stanfield's picture is behind my right shoulder. 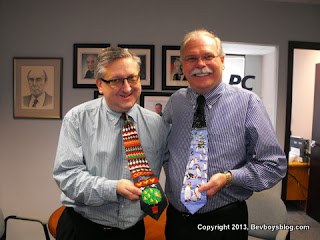 As a piece of trivia, Mr. Stanfield, who died in 2003, resembled strongly an ancient Egyptian pharaoh. I can't remember which one, and looking at pictures and busts of them just now didn't help me too much. But it is more than a passing resemblance. 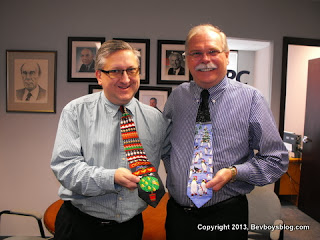 Getting back to Jim David, he is an ex-radio guy whom I met face-to-face last year at Clive Schaefer's funeral. We  have kept in touch since, and he reads the blog on a regular basis.

Thank you for a few minutes of your time, Jim. And let's keep trying to get Jamie Baillie himself to pose with me. I'm sure he'd enjoy it.

Another radio picture on Friday. Looking forward to meeting this person very much.