Here is my second blog post of the day, with Saturday's Christmas Tie contribution.  You feel lucky yet? Well, do you, punk?

I visited my mother this morning at her nursing home. She dispatched me to go shopping for her as if she were the Wicked Witch of the West and I were one of her flying monkeys dispatched to cause Dorothy and the others some problems. 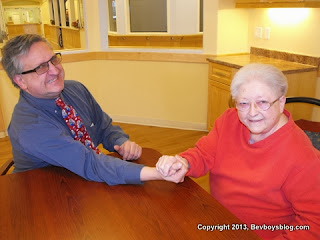 While out shopping I ran into my friend Ken Pineo, one of the subjects of yesterday's Christmas tie pictures. He bought a Canada toque, so I did, too.

Hours later, I returned, dropped off the purchases on her bed, and slumped in her guest chair, nearly narcoleptic with exhaustion. Before I fell asleep in that chair I asked her to pose with me for a Christmas tie picture in the nursing home's dining room. I got one of the nurses to capture the embarrassing moment. 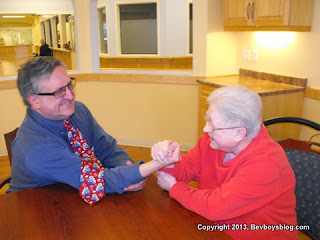 Understand something. Moving to the nursing home earlier this year is one of the best things to happen to my mother in many years. She is healthier than she has been in a very long time, although she's had a cold this weekend and didn't want to go out shopping with me as a result. She is physically engaged, mentally stimulated, and doesn't have to worry about preparing meals any more. She reads at a rate that would impress an English professor and has expanded her reading into areas that have surprised me. She likes the New Yorker these days. I must try to find some issues of The Economist for her to peruse so that she can have discussions about global economics with Ben Bernanke or Timothy Geithner. They could probably learn a thing or two from a woman who had to run a household on a very limited budget for several decades. 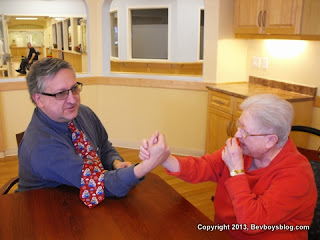 Anyway, I wanted to convey to you this improvement in her life by arm wrestling with her. I was going to let her win and not put up any kind of fight at all. But she grabbed my arm and pushed against it with hers with unexpected force. I am barely acting in these pictures!

Phew! I was almost glad to get away from her. 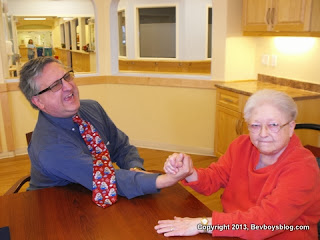 I returned to the house and had to recover from my ordeal. Early in the evening I drove back to the city, and here I am, typing away at 10:30 at night. Newbie is above me, keeping my cable modem warm. I will probably fall asleep in the recroom whilst watching something on the media player.

Major storm a coming. The next door neighbour's son, who will be shovelling the drive way, is my new best friend.