And, hello, ladies and gentlemen, to the penultimate edition of the sixth annual Bevboy’s Christmas Tie Extravaganza!

Today’s tie snaps were taken in the studios of Energy 103. My new friend Brad Legere contacted me and told me that he would be honoured to pose for Christmas tie pictures with me. 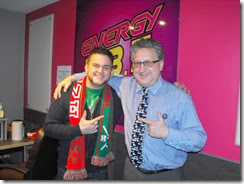 I still don’t quite get it. I am honoured that anybody at all would agree to pose with me for pics. For people to approach little old me surprises me.

Of course, you can imagine my surprise last week when someone in BC posed with a sign that stated “Bevboy’s Blog! Are YOU one of the 4.7?” I should download that and put it up on the blog. 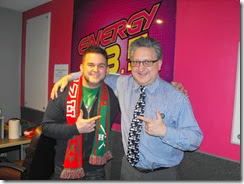 Anyway, Brad told me some of his career highlights and told me that he had been a reader of the blog for nearly 3 years now. I was flattered to say the least. 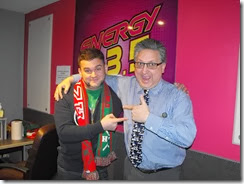 Tomorrow is the final day in this process, and I’ll bet you can’t wait for it to be over. Tomorrow’s pictures will be taken with a good friend I haven’t seen lately. I look forward to seeing her again tomorrow.

Brad, thanks for your time, buddy. Keep in touch.

See you tomorrow, me hearties.