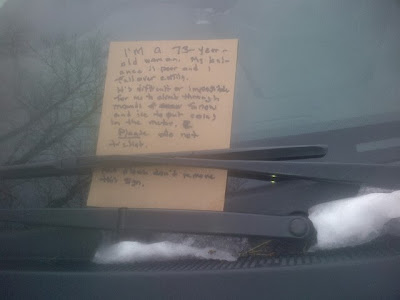 I thumb these pathetic, sub-par words in the Scotia Square food court as I kill time before going to my Toastmasters meeting.

Ray is still working away at his Lebanese place even though they're still booting his arse from the food court in another 40 days or so. A news update on Monday indicated that Sobeys has approached him and Buddy who runs "A Taste of India" next door to find a way to keep them here. It's obviously a face-saving gesture on Sobeys' part. Sobeys: the insidious, pernicious, sleazy conglomerate that cares.

I had a doctor's appointment this afternoon so I left work early. My doc told me about some cough medicine that will spirit my cough away into the night as if it were a North Korean political dissident. If that doesn't work he can prescribe something.

I said, "Isn't that a shampoo, the blue stuff?"

"No, you silly sausage. That's Selsen. You don't want to drink that. Might turn you into Papa Smurf or something. I'd have to get up and consult one of my medical journals to be sure. You don't want me to get up."

I have a pivotal birthday this weekend. that means that I can look forward to blood work and a physical. Sigh.

After the appointment I returned to my car, parked on Sackville Street, close to an entrance to the Public Gardens. I noticed a sign on the windshield of the car in front of me. I had to get a picture of it. Turns out it really was a little old lady as I saw her shuffle up to her car and take off. Truth in advertising.

Around 4:30 I drove downtown. I'm now parked on Granville Street by the legislature. Turns out the parking meter I ambled up to, already had time on it. It's technically illegal to use a meter with time on it IF you don't add some time to it yourself. I did but only because the parking enforcement dude was eyeing me suspiciously. Maybe he wanted to check me out.

On the way to the food court I checked out my gym for the first time in far too long. They've since moved to Granville Mall. Easily twice as big as the old place. The spin class room is spacious. When I resume spin classes I doubt if I'll end up with my nose in the ass crack of the person in front of me. A selling point.

It's now pushing 5:20. I will take the balance of my coffee with me to my TM meeting and wish you all a pleasant yet wholesome evening.

From Bevboy's BlackBerry to Bevboy's Blog!
Posted by Bevboy at 1:18 PM