So. Wednesday morning I dropped off Patricia at her work. I was hungry, so I went to the Tim Horton's on Quinpool at the corner of ... the street that is by the animal hospital and the health food store. I went in and ordered a breakfast sandwich and an extra large double double.  All was good.

Then, I happened to overhear something that would change the course of my life.

The coffee was served in a roll-up-the-rim-to-win cup. Buddy told me that it was the last size they had which had those special cups. Then, a girl working with him noticed that there were but 3 of those special cups left in the damned store. And I heard her say that.

You have to understand something. I have always liked the number four. I think it is a nice, round number. It is the next even number following two. I don't care much for odd numbers. They're called "odd" for a reason, in my opinion. So the fact that they had but four of those cups left, including the one I just bought, seemed like an omen, in much the same way that a bat that flew into Bruce Wayne's house in 1939 inspired him to become Batman.

I ordered the 3 additional double doubles, and they were dutifully put in a tray. I carried my breakfast and my surfeit of java to my car and drove to work. I was embarrassed to be carrying that much coffee, so I hoped that I would not be seen entering my place of employment. I don't think I was.

I rushed past Jane and Sherry to my cubicle, and put the tray full of coffee cups on my table.  Here they are, mocking me, taunting me, wanting me to consume them. 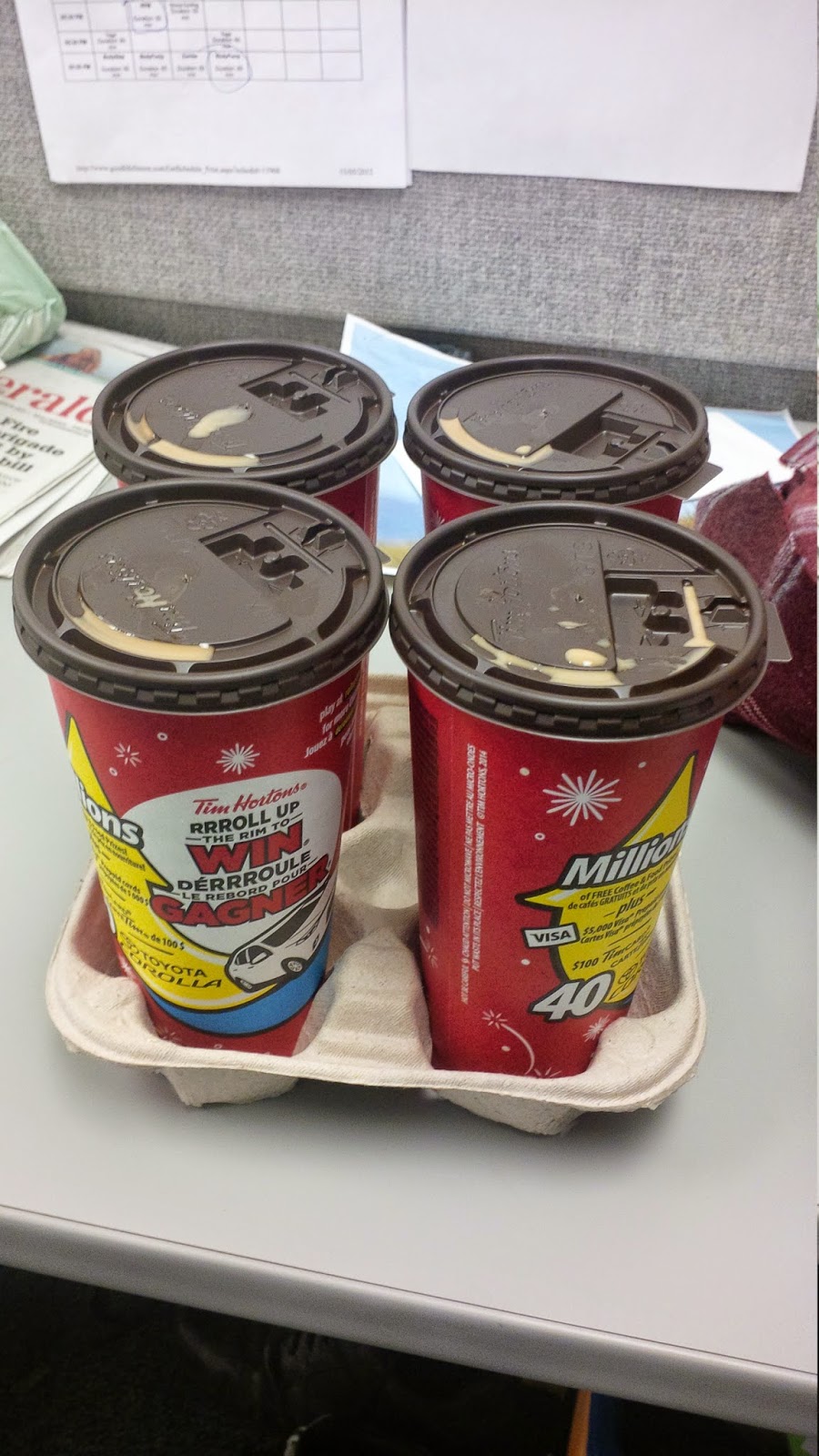 I wasted no time. I laid siege to the first mammoth cup. Within 45 minutes or so, it was gone. 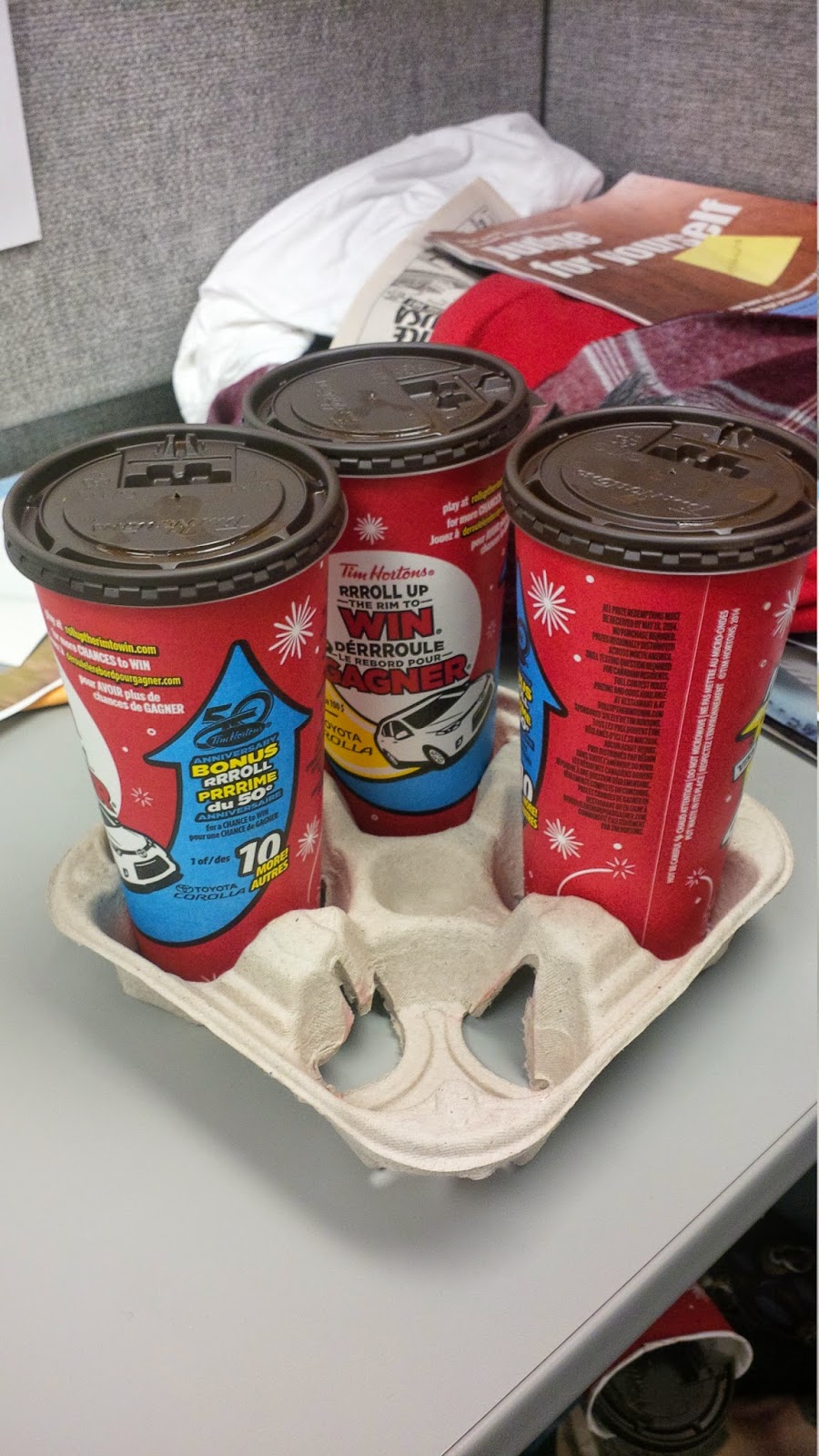 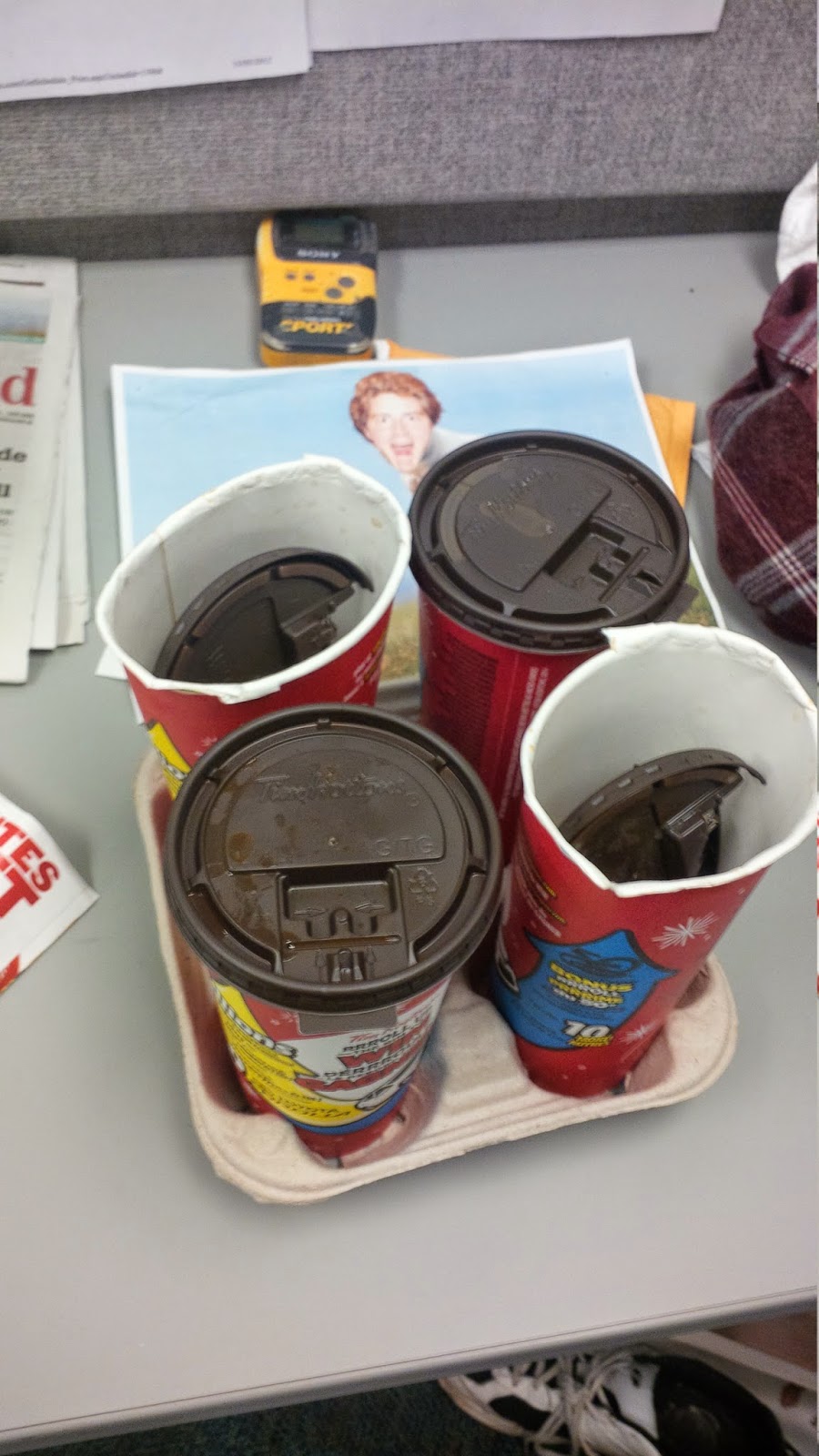 Only two left! I selected another cup. By 2pm or so, it was gone. And, nearly, so was I. 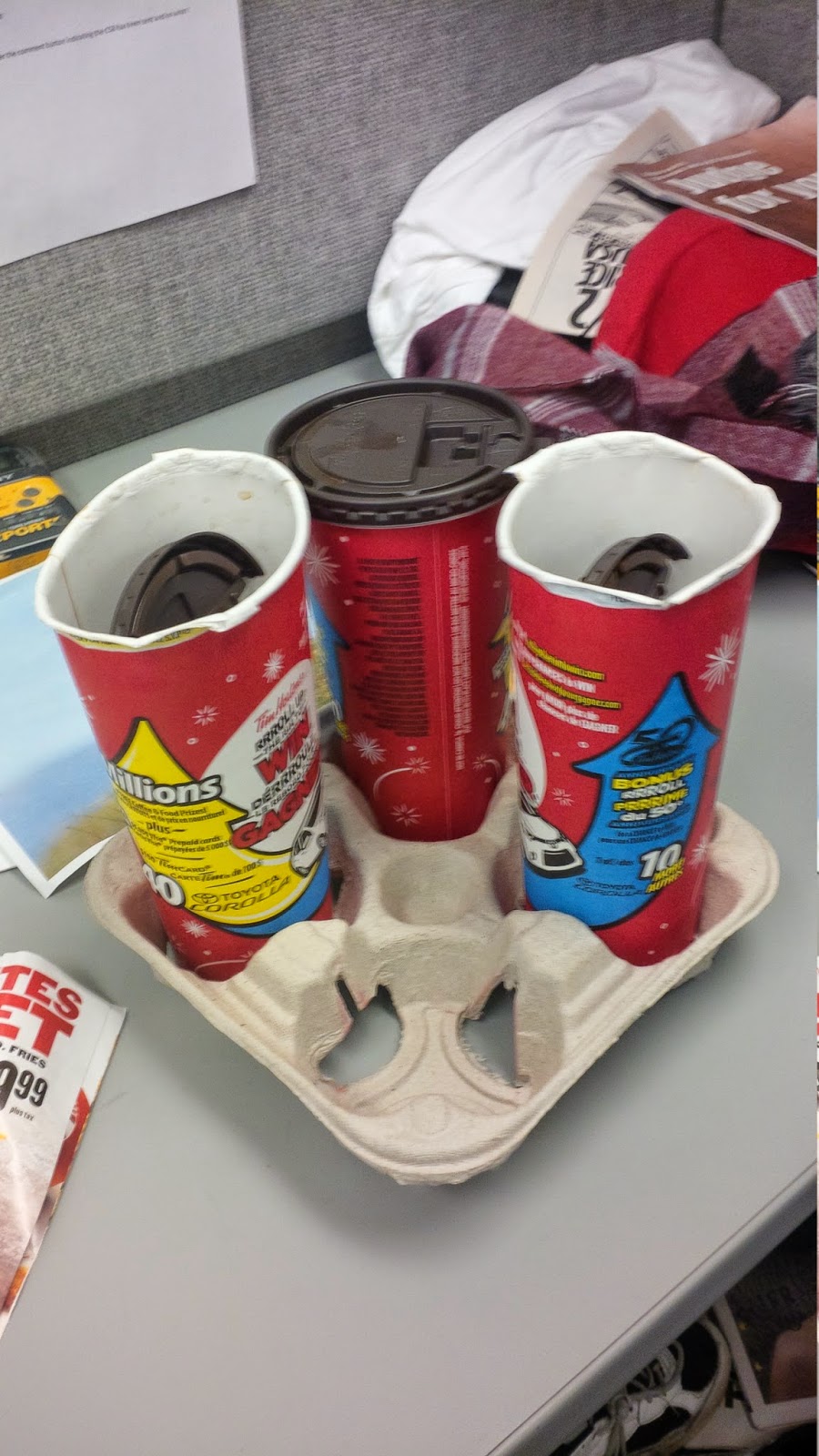 The thought of putting the remaining cup to my mouth and consuming more coffee struck me as a ludicrous proposition. I was more jittery than a virgin on his wedding night. I felt pains in my left elbow. And someone had discovered me dancing on the ceiling like in that Lionel Richie video. 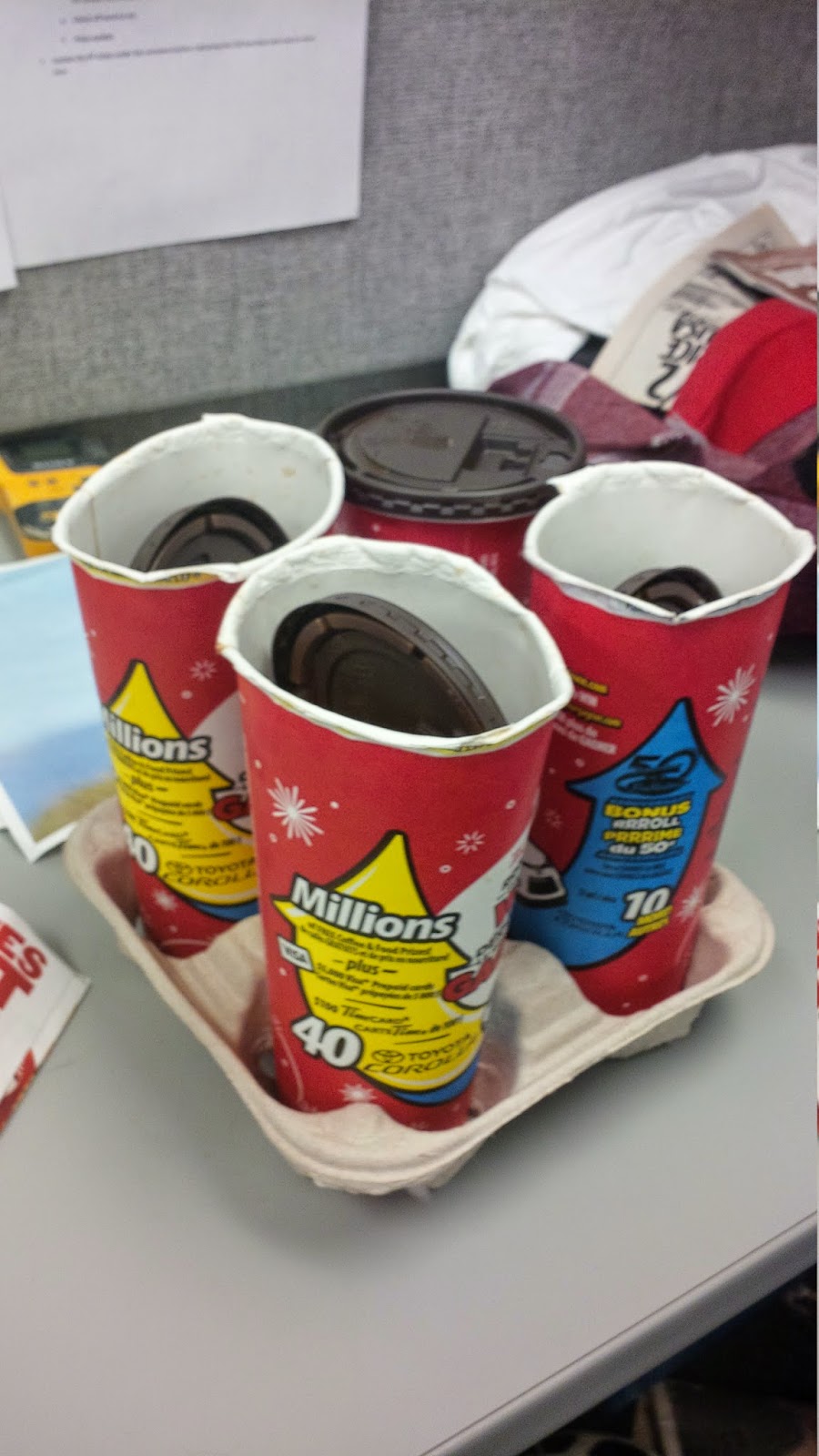 I hate to waste money, but with some reluctance, I skipped to our kitchen and poured the remaining cup of coffee down the sink. I decided to take the long route there to burn off some energy. 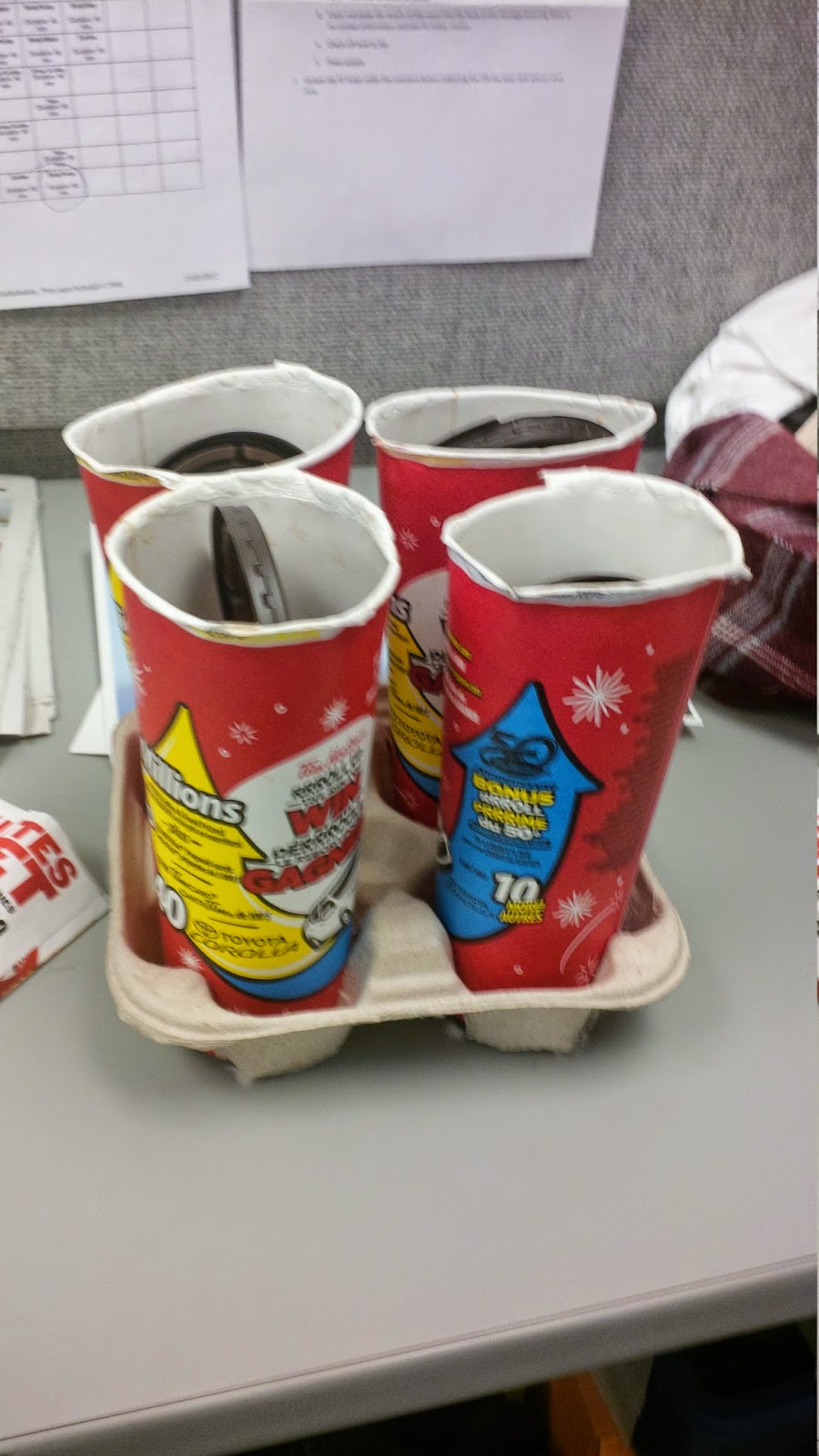 Now, the best part. I had rolled up the rim on each cup, including the bonus roll up where I could win a new car. 8 chances in total to win something.  I found, to my chagrin, to my dismay, to my crestfallenness, that I had won nothing. Nada. Zilch.

By this time, my eyes were bugging out of my head. My arms were flapping for take off. And my heart was beating faster than a Keith Moon drum solo. I had nearly ruined my health, I was going to experience an evening of pissing like a race horse, and I innately knew that all that coffee was going to burn a hole in me arse. And I had won not a damned thing. I had spent all that money, drunk myself nearly blind, and was going to experience an evening of exquisite torture, for nothing.

Patricia wasn't feeling that well, so I picked her up at her work. For a moment, I contemplated running downtown, heaving her on my shoulders, and running back to where I had left my car. But in the end, I used my car.

My  Wednesday evening was pleasant enough. The bucket I placed by my feet in the living room meant I didn't have to run to the bathroom. I was just worried I might fill it up like that kid who ran up to his mother to show how proud he was to have used pottie, holding same aloft, sloshing its contents on the floor. My fears were almost grounded.

After three episodes of "Banshee",  one of the most violent shows on television, during which I acted out every fight scene for Patricia, I went to bed. I took the flight of stairs in one leap. Even Newbie was impressed. And I was in no condition to write a blog post.

Now you know why.

This evening, I am feeling better. I don't want coffee for a very long time. The look of it. The sound of it. Even the name of it, will set me off. Today at break, I had a can of coke. Tomorrow, I will have something that isn't... that thing I overdosed on yesterday.

My lesson? All of a sudden, four is not my favourite number any more.

Six is a nice, round number. Let's go with that.