It is 7:45. I am still at work. Patricia is taking a Pilates class not far from here. Rather than drive home and wait for her and then pick her up, or for her to take her own car to this class and drive home, I elected to hang around here.

I started working on the Ron Roberts interview this evening. I have had some special interest in getting this done, so I will prioritize it over finishing the transcription of the interview of the guy who more-or-less told me to stand down. Mr. Roberts is retired and is not in a financial position that would likely result in being sued by anybody. He is quite outspoken. It is my hope (nay, my goal!) to finish transcribing it within the next 2 weeks.

There is a big-arse sale on stain and sealant at Sherman-Williams this weekend. There is such a store mere meters from here. I chanced in there on Tuesday morning and emerged with the promise to return on Saturday to get some stuff for the front and back decks.

As I mentioned yesterday, the carpenters won't be back until Saturday. In the meantime I had hoped to be able to enjoy my time on either of the decks but that has not been the case. We have had rainy, dampy weather for a few days now. Not only is the lawn furniture too wet to sit on, but now I have to think about what the water is doing to the brand-new wood that comprises the new decks. I mean, it will dry; but will the moisture cause any early-stage rot? If I put 2 coats of the stain in the decks will all be right in the world? I am not sure. For the first time in my entire life, I am actually thinking about this topic.

The front steps and the side steps of my house were in good shape when I moved in. For several years I was diligent in staining them both. But I didn't spend any time or money on the back deck. Even in the early 00's, the railings were rickety and one could see holes in the wood and espy the ground underneath it. Let's not even discuss the state of the storage area under the deck. Yeah. Let's not.  At least we were able to rescue the wheelbarrow from it as well as some of Patricia's stained glass.

But the new front deck? The back deck/landing? They are costing me so damned much that I had better, on my father's grave, be out there staining them, and toot sweet to boot.

Before I call it a night, and never mind the joke, I need your help with something. Hence the blog post title. I am nothing if not a to-the-point Bevboy.

I took the following picture this morning using the camera mode of my new-to-me camcorder. 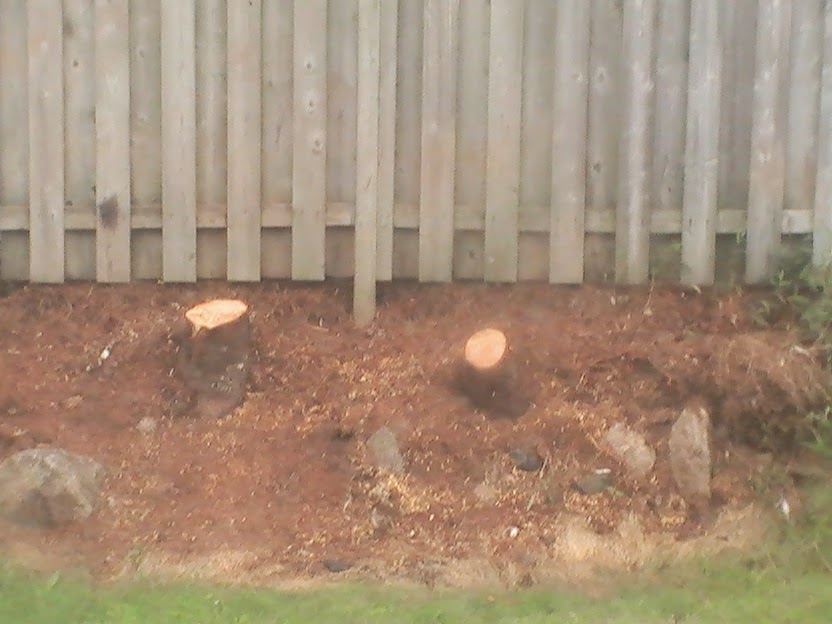 It depicts the back yard. The tree stumps were two mighty trees stood until 10 days ago, until they were felled by the woman who is running the contract for all this work. Remind me never to piss her off.

What do you do with the stumps? I had suggested garden gnomes, but for some reason Patricia doesn't care for gnomes. Who doesn't like gnomes? Did gnomes frighten her as a child? Do gnomes perhaps resemble a man she once dated, a fellow known only to me as "No Dick"? Or is it a case that gnomes are simply too cliché ?

What I do know, though, is that I would like to do something special to make these tree stumps stand out. We are next to a school. Perhaps we could have little tree stump hookers, who stand in provocative clothing next to the stumps and attempt to beckon men to their matrimonial doom.

No? Okay. Well, one could do what I saw on pinterest earlier this evening: A whole page of tree stump ideas! Boy, those look like fun.  My gosh, there are web pages, probably web sites, devoted to landscaping around tree stumps. Who would have known? Or cared, come to think of it.

Anyway, for those of you who care, and know that I want to make Patricia happy, what do you suggest we do with the above tree stumps, absent of removing them, of course? She wants to keep them, perhaps to sit on them to make sure that the lesbians who live next door keep their bloody mitts off me.

Please send your suggestions to me via a comment on my facebook which links to this post, or via a reply to the tweet, or to the official Bevboy's Blog email address. Or, just drop by my office in the next few days and in sotto voice, tell me what your suggestion is.

The prize will be the leftovers from tonight's dinner. A serving of brisket with potatoes and peaches and cream corn. Minus the brisket. There wasn't enough for another serving.

Get cracking, folks. I need your suggestions.