Patricia had her 25th Anniversary Long Service Award ceremony today. Nova Scotia civil servants who have worked for the province for 25, 30, 35, or 40 years get feted. 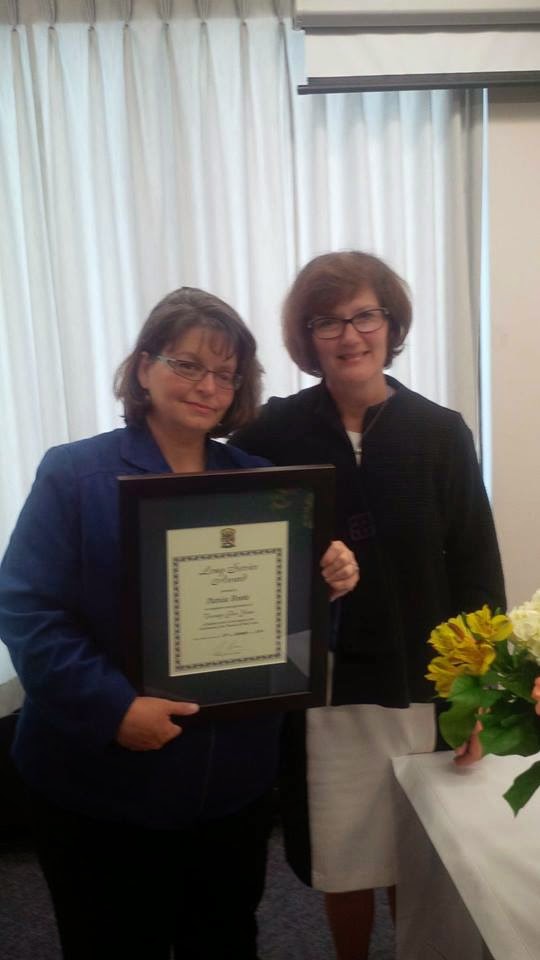 I was her plus one. After struggling to get out of the parking lot, because I was trapped in it by a huge truck unloading stuff, I got downtown and to her work with 3 minutes to spare. She took me to the training room down the hall, wherein other people at her department were sequestered.

They fed us. Sandwiches, fruit, Crudités, sweets. I tried not to make a pig of myself.

Every employee there got a very nice framed certificate and got to pose for a picture or two with the CEO. She was kind enough to agree to pose for a second set of pictures when the BlackBerry didn't keep the one I did take. 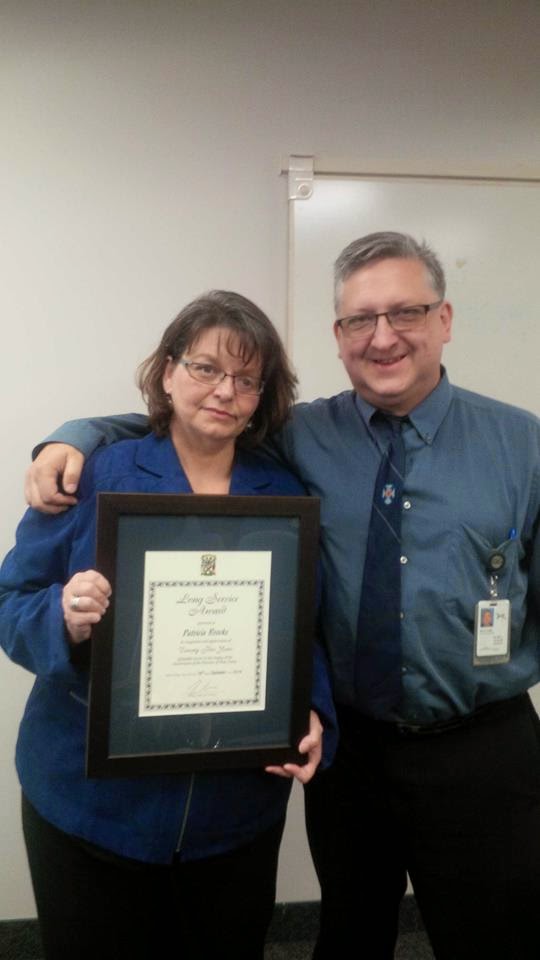 After that was over, we mingled for a few minutes before putting her stuff in my car, and then hieing thither to the World Trade and Convention Centre. There was a much bigger and more elaborate affair there, starting at 1:30. The premier himself, Steven McNeil, was in attendance and posed with all 300 or so civil servants who were there to accept their small gifts based upon their years of service. Patricia got a nice pin. 30 year people got a watch. Folks with 35 years of service got a very nice clock and pen set that was perhaps made of pewter. And the few who had been there for 40 years, 5 years after they would have to contribute to the provincial pension plan, received a painting of the Bluenose. Premier McNeil joked that these people got the Bluenose, but this one floats. Got a good laugh. Nice to see her can laugh at himself, not that the situation with the Bluenose is very funny. 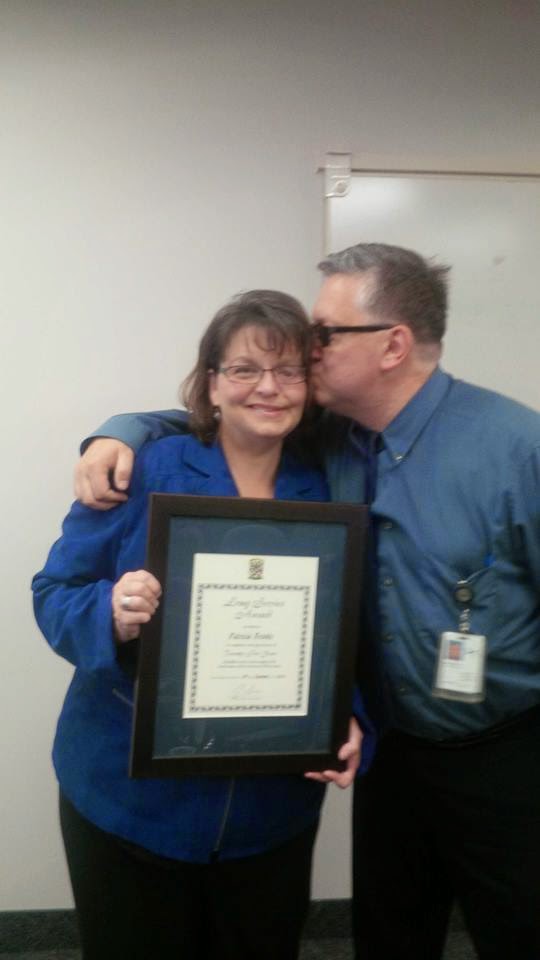 It took more than 2 hours for all 300 people to have their moment with the premier. One by one, row by row, category by category, each person would walk up on stage, be greeted by Mr. McNeil and the minister in charge of the public service commission, and pose for 3 or 4 quick pictures with them both. By a method I do not know or pretend to understand, the pictures will be matched with the correct person and these folks will all get their pictures with the premier to keep. 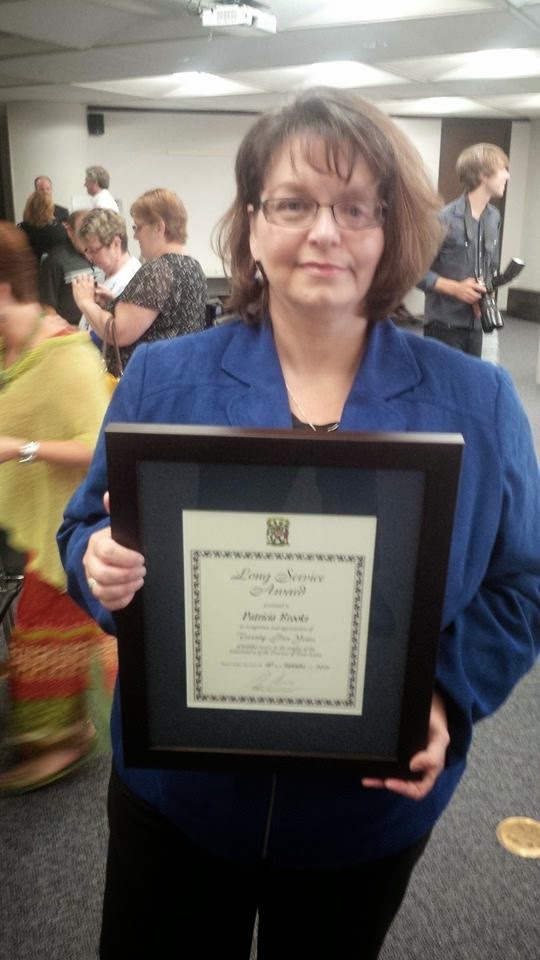 I knew more than a few of the people getting their long service awards today. In some cases, I had not seen them in years. In one case, it was a guy I work with, and who reads this blog every day. In another case, it was a fellow who's a member of my Toastmaster club. And the sweetest incident was either when a husband and wife celebrating their 25 years of service went up together, or when a deaf man's training dog seemed to pose with him and the premier and the minister. Hard to say.

By 4pm, we retired to the adjoining room, where they had sweets and coffee and water. We spoke with some of the other recipients and left. We went to the Vogue Optical on Barrington Street where they fixed my glasses. We chatted with Cindy, the store manager, for a few minutes before we had dinner at the Mongolie Grill down the hill.

Hadn't been to the Grill for a few years. It is delicious but jeazly expensive. You get a bowl and select from a large host of ingredients (meats, veggies, noodles, sauces, etc.) what you want to be grilled for you. Buddy takes your bowl with stuff in it and cooks it on the huge open grill and brings the result to your table. The cost is based upon the pre-cooked weight, and it sure does add up fast. There is plenty of food for lunch on Friday.

We got back home and are in our jammies. Patricia was upstairs sleeping last time I checked, while I have spent the last couple of hours here in my media room.

I have had time to think about today. I am in my 22nd year of service to the province. I am now looking forward to my 25. By that time, I will damn well have earned a rubber chicken dinner and a little Nova Scotia pin.

Tomorrow morning we will pile in to the car and head out to the cottage. Lots more staining to do there. Lots of fun. Nothing like what today was like.