Hi. I am back in the city after a quick trip to the Valley.


I got up around 7:30, which was about 2 hours after I finally warmed up after Friday night's adventures. I got something to eat, and made some coffee, and hit the road around 9:15 for the Toastmasters Leadership Institute being held at CFB Greenwood. I knew I would need something to write with but had neglected to take a pen with me from the city. There were not many at the house, but eventually found a stash of them in Mom's old bedroom. I grabbed them all and stuffed them in my pocket.

When I got to the army base, and found where the session would be, I sat down and pulled out those pens from my pocket and started scribbling with them on an old envelope. All but 2 of the dozen or so pens were useless, the ink dried up nearly to powder. I threw out the non-working pens.

The TLI was very interesting, actually. I am delighted I went. There was plenty of good information there. And, at noon, as you can see, there was plenty of food. I helped myself to some sandwiches and fruit and veggies and a few sweets. 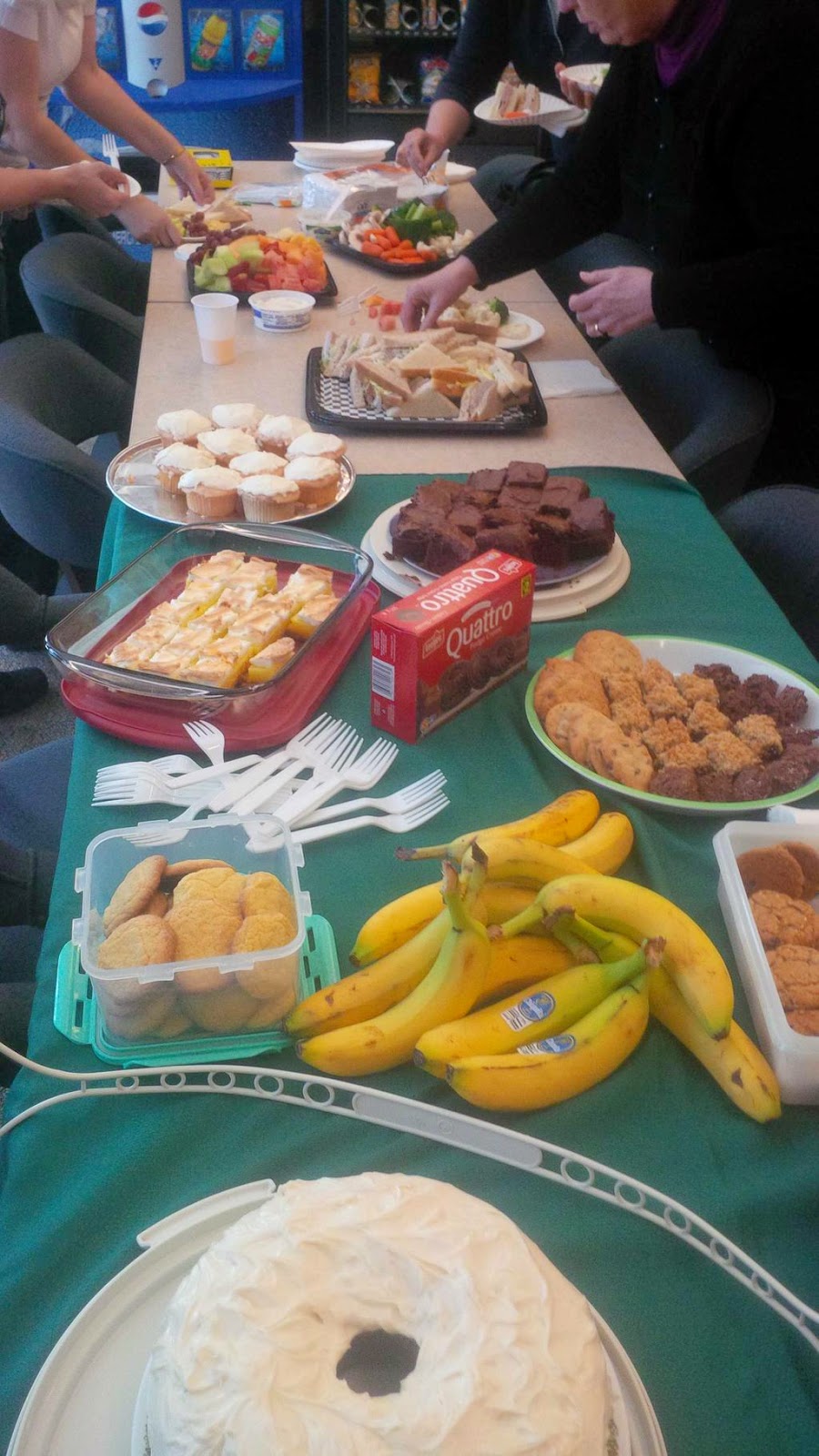 The afternoon sessions were also useful. I took plenty of notes.

It let out around 2:45. After another errand in New Minas, I returned to the house and grabbed the pies I had purchased Friday night in Canning plus a few other things I had brought with me Friday night. Loaded up the car with those scant items and returned to the city. I got back here around 7pm. After a quick chat with Patricia, and petting Newbie for a bit, we settled down to watch another episode of "Foyle's War". Shame on us for not discovering that show sooner.

I said something to Patricia earlier that I will share with you now. I haven't watched the final season of "Dexter" yet. It was broadcast 18 months or so ago. Haven't seen the final season of "Spartacus" yet, and it was on 2 years ago. Haven't watched the final season of "Sons of Anarchy" yet. Loved those shows, but for some reason I can't bring myself to watch them nowadays. I still like R-rated comedies and action films and the like, but I find myself mostly reaching for dramas that are lighter on the heavy violence. I don't know if it is a function of growing older, or if it is a momentary flirtation that will disappear as soon as it came.

I am quite taken with the British version of "Shameless", about an alcoholic father and his children, and how they cope with their father as they subsist in near poverty. It has a rawness that I find intriguing. I will probably watch an episode before I turn in this evening. The only drawback is that the accents of some of the characters are nearly impenetrable. I have to turn on the close captioning in Netflix to have a fighting chance of knowing what they hell they're saying.

Not sure where I am going with this, except to say good evening and to wish you a pleasant tomorrow.