Hello, my lovelies. How are you this evening?

It is just past 11pm. I am here in the Valley about to turn in for my second evening here.  The internet connection is still working, despite the utility's best efforts.

Seriously. I have never dealt with a more incompetent, borderline negligent, series of people. Everything they could have done wrong with this seemingly easy request, to add an internet connection here, was messed up. First time, they scheduled me for a day I didn't find out about until it was nearly too late. Then, two weeks ago, they didn't bother to show up here, but rather at my house in Halifax. Finally, on the 21st, they did show up, but in setting up a pppoe username and password here, it messed up the one in Halifax. Changing that one, messed up the one here. Finally, an hour before I had to leave for the funeral yesterday, they got it fixed to the point where there is internet here under one pppoe username/password, and the main one in Halifax, under a different pppoe username/password.

I made it to Greg's funeral with time to spare. It was a nice service. I hadn't seen Greg in quite a few years, but I certainly remember him fondly. There is a story about him that I'll bet very damn few people in his family remember, or even know about. I will tell it here, and now.

Many years ago, we kids were going to play baseball down the street from where I type these words, at the home of two brothers, one of whom would grow up to marry Reg's sister. Greg, Reg, and I, maybe one or two others, jumped on our bikes and drove there. The younger brother was angry with me about something, and don't ask me what it was because even I don't remember. He demanded I leave, refusing to play with me. The rest of the boys could stay, but not me. I would have to leave.

Greg refused to have it. He didn't like how I was being singled out. So, he said words to the effect, "Let's go, boys! If Bev can't play, then we won't play." We turned around and left. My final image as we drove off that day was the younger brother being beaten up by his older brother. Hee hee.

That lesson taught me that not only is there safety in numbers, there is strength in numbers. I won't say it turned me into a trade unionist, but the symbolism was not lost on me. Let's leave it at that.

Anyway, the funeral was very fine indeed. I learned about Greg's love of animals, how much he loved his children, and how sensitive he was to the travails of his life. He didn't have an easy life. He quit high school after Grade 10 or so, but I only found out very recently he quit because he wanted to keep his family together. I am not sure if I would have done what he did. I don't think I have that kind of character strength.

The funeral made me think of how we treat the people who are from the so-called lower classes. Every day I see how we treat the janitors, the people who clean our office buildings, the folks who labour in some factory for crappy wages. At best, it is with indifference, a sense of, "too bad you messed up, buddy!" At worst, it is with utter disdain and border-line contempt. Shame on the people who make the service class feel so badly. At the very least, the next time you order a coffee at McDonald's, you could say please. I sure do. 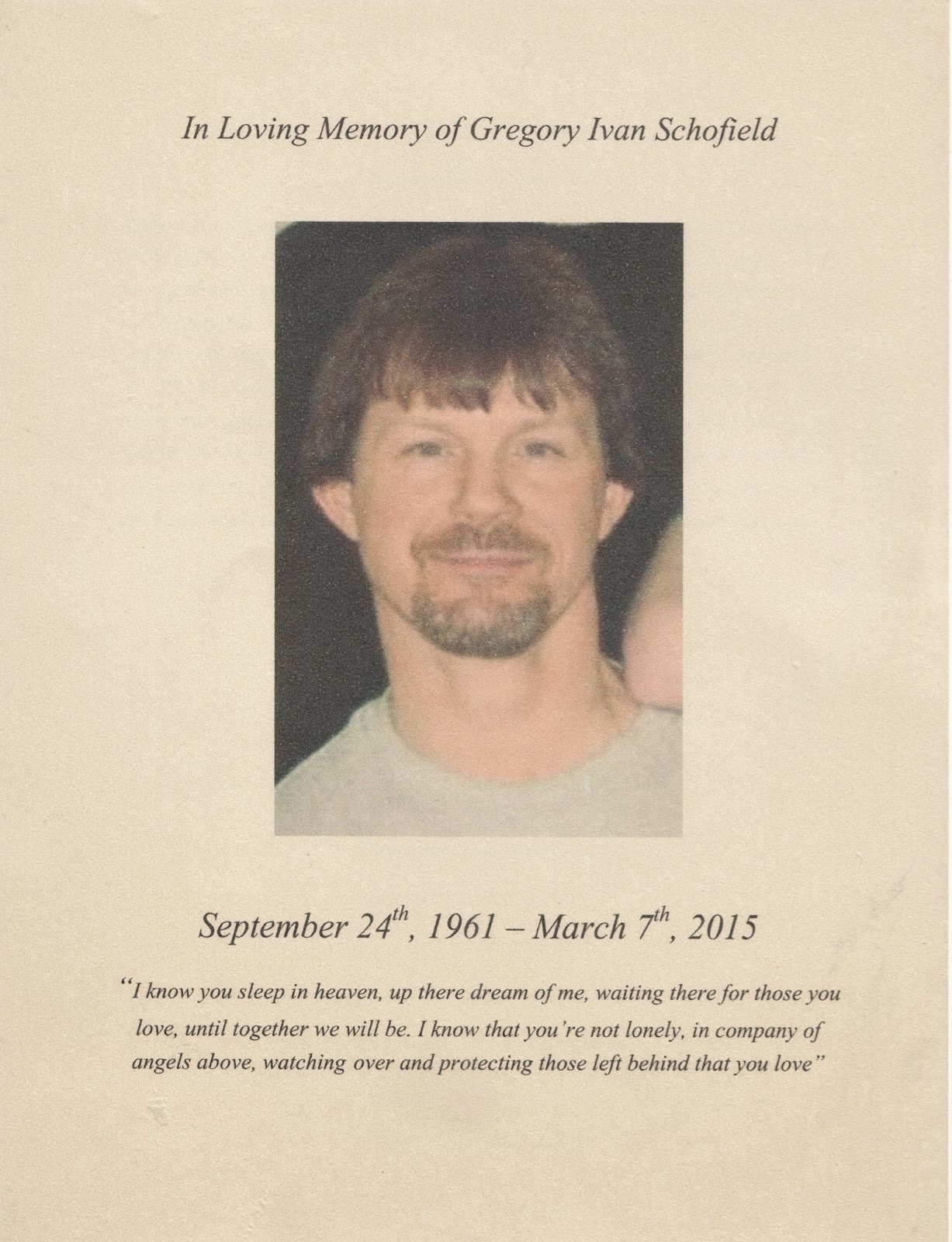 Poor people love their children, too. Greg sure did. He died before his second grandson could be born. I also learned about the dog he had as a boy, one named Brutus, who was put down by the SPCA because it attacked a neighbour kid after the kid teased Brutus. The night before Brutus was put down, Greg stayed in the barn with him all night, not leaving him once. I hope that little bastard kid was happy is all I can say.

Greg had four children, would have had two grandchildren, and made friends with anybody who met him. But because he lacked education, and would have been looked down upon by people who did have it, he perceived himself a failure. That, coupled with his depression, led him to take his own life earlier this month.


I don't talk about it much. Not because I'm ashamed of it or anything, but it just doesn't come up that much. My milieu, my background, is anything but the white collar existence I enjoy now. My relatives were mostly blue collar folks like the above, or farm labourers, or carpenters like my dad, or others who couldn't win a break if they tried. People who actually had to work for a damn living, and never made much money doing so.  I'll bet some of the other people I know, who come from privilege, would never have anything to do with those people. They would never have anything to do with me, if I had not climbed up through the morass and done a little something with my life. Whatever that means. 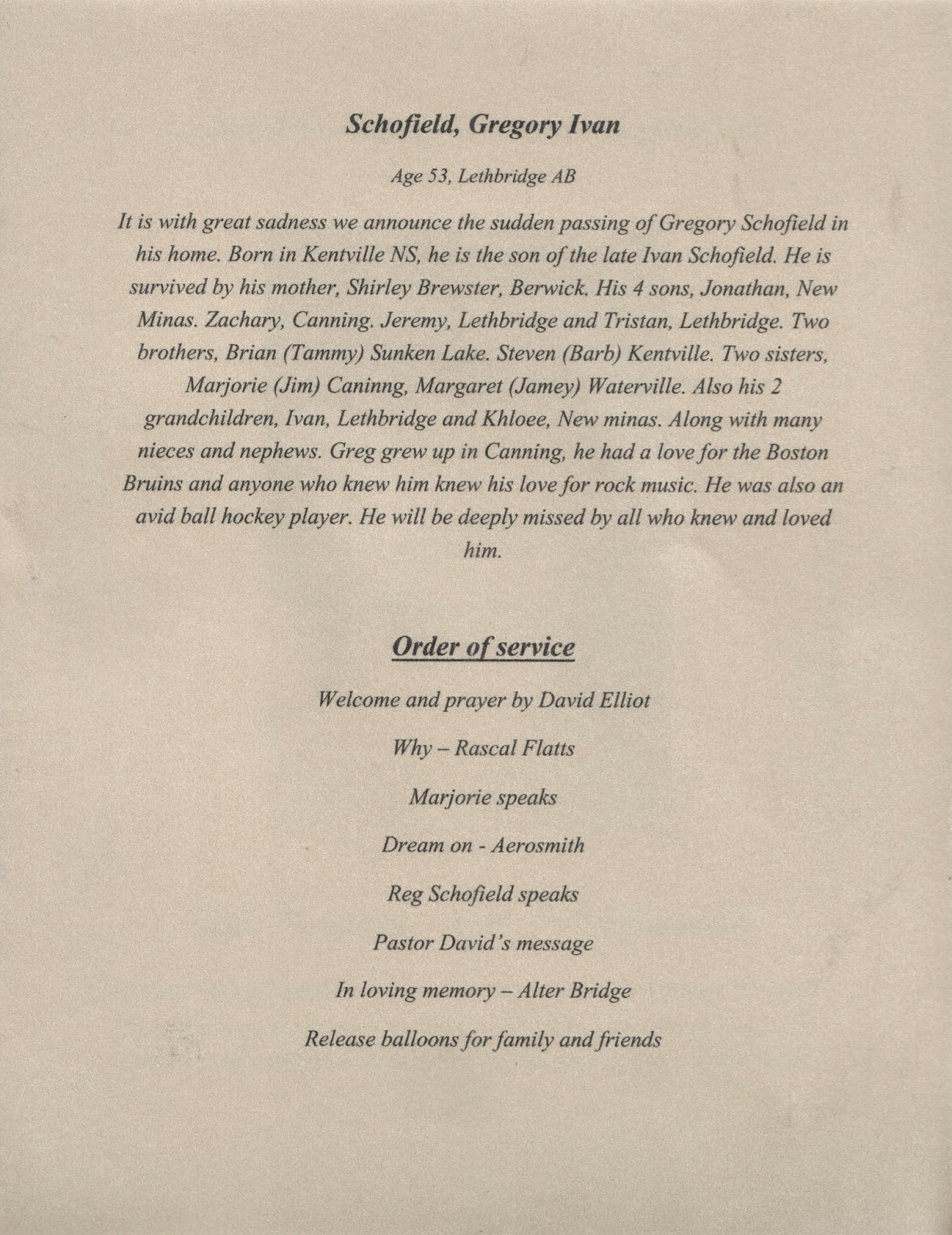 Rest in peace, Greg. You are in a better place. Some days, I may even be envious.

Hello, I'm Tristan, one of Greg's sons. My father would have been 56 yesterday and I have to say I miss him greatly with each waking moment. I have to thank you for writing some of your memories of him; it warms my heart. I know you posted this in the aftermath of his passing, but I only just came across it now. Thank you. I miss him.

Thanks for writing, Tristan. I believe I have met you, but quite a long time ago.

I'm glad you liked the blog post. Your father was a good man who left us far too soon.

How are things with you?