Okay. Before I get started, I will get this out of the way. My latest column for Frank Magazine went live today. A couple smaller news stories were cut. The deal I have with my editor is that when he cuts these little pieces out, I am free to run those stories here. I do this with his knowledge, his consent and (I hope) his blessing. 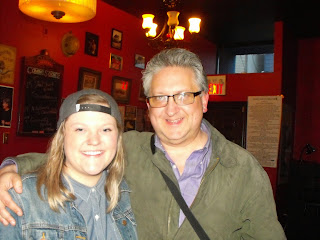 So, you have an interest in being on the radio but you don't have the diploma? What do you do? Well, if your name is Erin Hopkins you can volunteer at Seaside FM and let Wayne Harrett decide to give you a chance on air working the summer cruiser, the news and some on air shifts. Now she's got a full time job at C100 and The Bounce in Promotions. She continues to work at Seaside FM every Sunday afternoon. Now that they have their power boost, I can’t wait to listen to her. If her show is half as enthusiastic as she is, then I am in for a treat.

In other news, there will be more details in my next column in 2 weeks, but Ron Roberts, interviewed in Frank last summer, died today. Patricia and I visited him on Sunday afternoon. He was in decent spirits. We chatted for about 10 minutes before he got too tired to keep talking, so we took our leave. Wayne Adams tried to visit him today at 12:45, but his nurse told Wayne that Ron was sleeping very soundly. I got the email from Ron's cousin around 3:20 that Ron had passed.

Ron had a heart attack at Christmas time. Complications ensued including fluid build up and the attendant strain on his kidneys, which were shutting down. He had had a stroke that made the left side of his body difficult to use. He had refused all medications save for those that provided him comfort and eased his pain. He was ready to go.

If an interviewer can get to know his subject to any extent, I think I can safely state that Ron was a pretty special guy. While this is a sad day for his friends and loved ones, we can all take some comfort in the fact that he lived some pretty good years and met some extraordinary people. In his apartment he had signed photos of Frank Sinatra and Bobby Darin and Michelle Phillips and Marie Osmond and so many others. Ron lived the way he wanted to. And if my interview with him that ran in Frank last summer played some small role in getting his name out there again so late in his life, then I am feel proud for that. I know he got a kick out being accosted at Sobeys by that woman who had read the interviewed and wanted to talk to him.

I do not know anything about the funeral details. I will post them in the usual places when I find out. And I will make every effort to attend this funeral. I wouldn't miss it for the world.