I write these words in the kitchen of the house I grew up in. So nice to have an internet connection here. I drove up here this morning.

I got here, and my heart sank. The lawn was so shaggy, so long, so disgusting, that I knew my work was cut out for me. I had brought down with me the new-to-me lawn mower and whipper snipper thingy. After lunch, they proved to be worth every penny of the 50 bucks I laid out for them. The only problem was, because the lawn mower does not have the raw power of the lawn tractor, mowing the lawn took much longer. I can go places with the lawn mower I cannot with the lawn tractor, but going to those places takes a longer period of time. It took me most of the afternoon to take care of the lawn, and to go around the house with the snipper thingy. The snipper thingy works far better than it has a right to, by the way. It has more power than the stupid arse battery-powered device I bought a few years ago. It is not as powerful as a gas-powered snipper thingy, but I am very pleased with the juice it does have.

By the time I was finished, it was dinner time. I drove to New Minas to get an extension cord because there was no suitable one here to use on the lawn mower or snipper thingy. I drove to Kentville because Darrin Harvey himself had invited me to come to the 7th annual K-Rock birthday party, which they always hold on Apple Blossom weekend. I had never been to one. 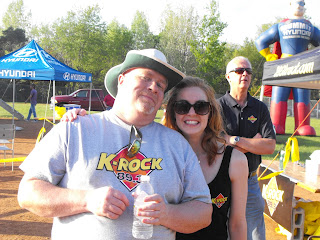 Every year they rent some space in Kentville's Memorial Park and hire some bands to put on a show, following which are the annual fireworks. I hung around for a couple of hours and heard a really good cover band whose name will come to me 5 seconds after I post this message. The second act was a Fleetwood Mac cover band called Fleetwood Mix. It occurred to me that it likely would not have cost that much more to hire the actual Fleetwood Mac, but I digress. 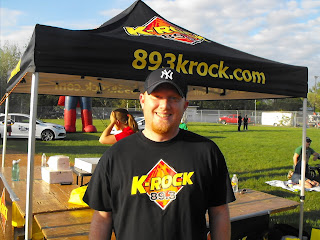 I got to talk to Darrin for a few minutes. I saw Mel Sampson again. Her hugs are just as nice now as they were the last time I saw her a few years ago. And I met some other folks at the station, most of whom knew who the hell I was, which is always nice. I met Darrin's co-host on the morning show, Becky Tucker. I met Colin Sweets, who's presently the morning guy at Radio 965 in Halifax. We had a nice long chat, actually, during which he revealed that the morning show could have taken a very different turn last year. I probably shouldn't say more, but it would have been a mighty interesting turn of events had it happened. No disrespect to Colin, of course. I told him that Radio 965 is greatly improved. It has lost that coffee house feel and vibe and has become a station with up tempo music played in sets that no longer make me switch stations. I was very impressed by Colin Sweets, actually. A very nice young man, whose head is in the right place, and who has a good future ahead of him. 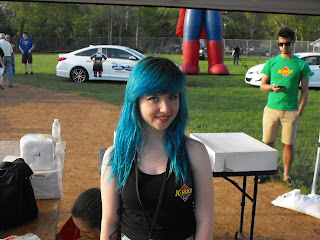 I met Scott Baines, the afternoon drive guy on K-Rock. He reads my Frank column, and noticed the altercation I had with Peter A. Clarke on Thursday, and laughed when I told him that Clarke had called me ... well, the word one never calls a woman. 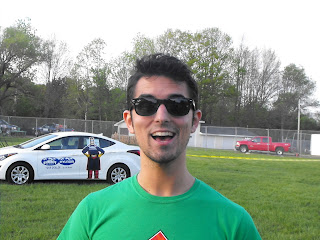 And I met the shy, retiring, conservative Frankie Hutchings.

Damn, I had a nice time this evening. I heard some good music. I saw some old friends. I met some folks who were very nice and who have the right attitude to take them places. 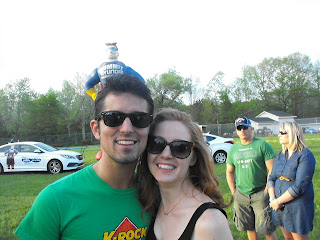 Been a very long week, and an especially long day. I have to get up comparatively early tomorrow morning to drive to CFB Greenwood for a Toastmasters thing. Like I want to. Sigh. A tale for another day. 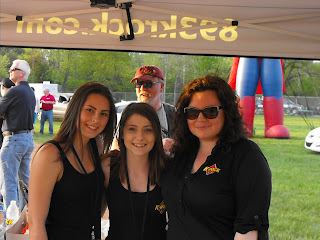