I write these humble, sub-part, slightly pathetic and off-putting, words in the Valley. It is Saturday night, just past 10 o'clock. I am listening to "Saturday Night Blues" on CBC, but will switch over to the K-Rock request show in a moment. Or maybe I did 3 seconds ago. Whatever.

And do you think I can get through to the host? Phone is ringing off the hook there, I'm sure. Why can't other stations try a request show on a Saturday night? At the very least, it would demonstrate who is listening?

I drove up here Friday night. This morning, I mowed the lawn, yet again. I even cleared some of the debris behind the garage, but I am by no means finished with it. I would almost need a scythe to clear that. Nice to see see the ground there again, though.

The guy from the phone company showed up shortly after 2pm. I had booked someone a week ago to fix the internet connection. Kyle is his name. He took one look at the modem and surmised what the problem was. He went away to the office and called me to ask what was happening. I said I was sitting around, chillin'. When he said, no, I was wondering about the modem, I ran into the bedroom and told him that the DSL light now solid, but the internet light was red. He came back to the house and reset the modem and logged on to the modem and changed some settings that he could have just told me to change to save him some time, but nooooo! I guess he wanted to see me. Flattered. He is much  younger than I am.

Anyway, turns out that when another guy was here a couple of months ago and resolved an earlier issue with the internet, he had missed one step, a step that meant that the port associated with this account went into a "to be used" bucket. A week ago Friday, the internet was working. But a week ago today, that port was allocated to a client who was just signing up for net service. Now, as of 7 hours ago, I have a new port number, one associated with this phone number, and one which will remain mine until I give it up. Which I won't. Because I like Netflix too much.

After Kyle left, I watched some stuff on youtube and Netflix. I just got finished watching "An Honest Liar", a documentary about The Amazing Randi, a person I have admired for more than 35 years. I only found out a few years ago that he was gay. And I remember reading that his husband had been arrested for something, but had forgotten what. This documentary explained what happened, and why. My admiration for Randi has only grown. My god, what a terrific human being he is. That he would spend decades of his life chasing down the a-holes who try to dupe gullible people out of their money under the guise of religion, when he could have spent that time making millions of dollars in his own magic act, only further justifies how I feel about him.

Tomorrow, I will return to the city. Another work week awaits me. But it is a shortened one. Friday will see us in Pictou County, and Saturday we will be at the Read by the Sea event in River John. Looking forward to that.

Wanna see some pics of me? Taken a few minutes ago? With a rum and coke? Okay! Here goes. 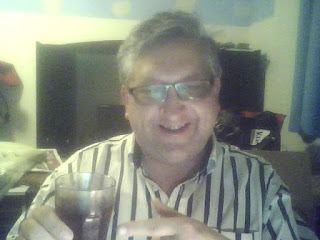 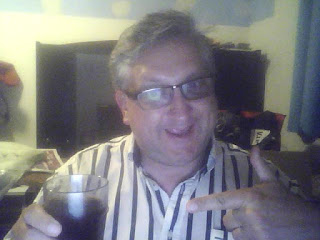 Say, who's reading this tonight? Who wants to call me here at the house? Someone nice, please. You know how sensitive I am.

Good evening, Bevboy! I'm reading this tonight, that's who. But you already knew that. I'm sorry you can't get through to request a song, but instead I highly recommend the Boston Pops concert and soon the fireworks show over the Charles River. Being televised live on PBS as we speak. Cheers!