I remain in the city. There was a complication or two getting my Frank column in to my editor. Something at my end, not theirs. I think I know what the problem is, but I have to experiment with it further before I can say it is fixed.

Otherwise, I did not do much today. After I wrote last night's post, I did decide to remove a bunch of books from the fourth "cell" of the bookcase over my other computer desk and replace them with old crime fiction paperbacks by the likes of John D. MacDonald, Robert L. Fish, Brett Halliday (or whoever the actual people were who wrote the Michael Shayne mystery novels), and a bunch of Alfred Hitchcock paperback anthologies.

Those are ... interesting in a slightly negative sense. If you read the front and back covers and didn't know any better, you might think that these books were all about horror, the supernatural, things that go bump in the night, and not in a way that would put a smile on your face.

I started buying these books when I could afford them, around the age of 12. They all promised that there would be chills aplenty inside, but at best these are crime stories, with the occasional hint of something really sinister. Jack Ritchie never wrote anything horrific in his life. He probably did enjoy the cheques whenever these anthologies reprinted one of his stories, though. To be fair, though, Gary Brandner, now deceased, did write The Howling novels, which are about werewolves. But he spent many years write crime-based short stories.

Here is an example of what I mean. 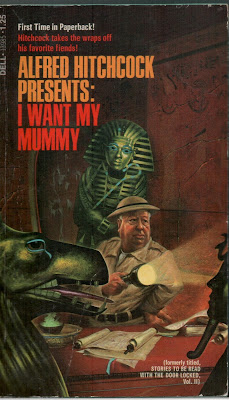 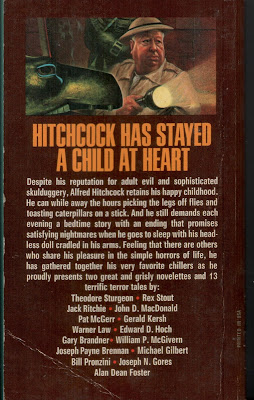 First of all, while this may have been its first time in paperback, it was published once before under a different title. At least they're honest about that right there on the front cover. But like I just said, these are crime stories at best. Nothing wrong with that, unless you're expecting something else, in which case you will be disappointed.

While we're on the subject of Hitchcock, the man died 35 years ago, yet 10 times a year Alfred Hitchcock's Mystery Magazine is still published, as it has been since 1955. A large number of gullible folks think that whilst alive, he contributed in some way to this magazine. The only contribution he made to AHMM that I know about is a series of photographs that he posed for and which the editors used over and over, with different coloured backgrounds to give the reader the impression he was looking at a fresh cover. Eventually, the editors realized that they could not continue to foist these upon the reading public, so they hired artists to draw caricatures of Hitchcock in increasingly droll situations reminiscent of what you see in the sample book above. Even the brief editorials signed by Hitchcock in those early issues were written by the editors. Hitchcock only sold his name to them. I don't know what he was paid, but occasionally the producers of the Alfred Hitchcock show would cull the magazine for story ideas and adapt them to them episodes of the show.

Here are a couple examples of what I mean. First, the re-used photographs.

This is the cover for the January 1973 AHMM: 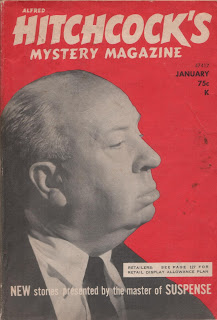 And the same picture for the February 1976 issue. Just a different color background. Lazy and cheap. 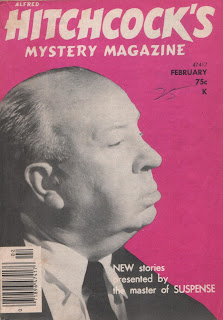 My goodness, AH was a homely man.

Here are a couple of the caricatures I mentioned before. 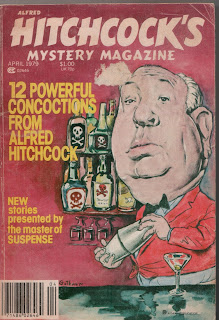 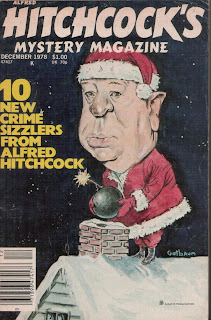 Same artist both times. Kinda fun. Eventually, after he died, they moved away from the caricatures and incorporated some of the photographs into new art, making it look as if Hitch were pointing at the scene in question. Little hard to explain. Nowadays, the magazine doesn't mention him at all, other than by the name of the actual magazine that is.

One last thing about AHMM. Back in the day, they would have illustrations, not much more than sketches really, to go along with most of the stories. From time to time, in keeping with Hitchcock's penchant for making cameos in his own films, the artist would incorporate Hitchcock in these pictures. Fun to pick those out.

Do you care? I think not.

I had no intention of writing so much or scanning so much this evening. I hope I haven't bored you too much. To give you some idea, Newbie is snoring away above where I am writing right now.