Hi. We are back home after a very pleasant evening with old friends.

Many moons ago, I went to university. On my first day of orientation I turned to a cute girl next to me and welcomed her to our mutual field of study. Her name was Cherylann, and still is for that matter. She remembered that long-ago incident this evening. Turns out that she showed up with a girlfriend that day, and she is still friends with Anne. And, it further turns out that Anne reads this blog, so hello, Anne!

We ate at the Wooden Monkey. The restaurant is about as eclectic as you can get in these here parts, but the name of the game was conversation. We got caught up on former students, and I made an effort to tell them as much as I knew about our former professors. One of them, I told them conspiratorially, always seems to be getting his ax sharpened whenever I visit the Wolfville Farmer's market. Not that there is anything wrong with that. At least one other professor had died, which they did not know.

My gosh, university was such a long time ago. I am not the person I was back then, and praise be to Oshtur for that. I was shyer than shinola, and more than a few people perceived that as standoffishness. It wasn't. I was just struggling to fit in socially and failing miserably. I eventually just gave up and hardly spoke to anybody because it was easier to stick my nose in a book and pretend the world around me did not matter. I would not blame people for people thinking I was an asshole back then. I wasn't. I promise I wasn't. But when I couldn't speak to people, they likely thought I wouldn't speak and wrote me off as an a-hole. Damn. And how many relationships with women went by the wayside because I was a 1980's, Caucasion version of Raj from The Big Bang Theory? I will never know. I'm sorry for many things back then. Thoughts like that went through my head this evening.

Anyway, at one point, Barry mentioned that when he returns to his home town with his family, people continue to accost him who remember him from when he was a youngster. He may have no earthly idea who they are, but he is too polite to ask them to identify themselves. I get that. It has happened to me more than a few times that I run into an obscure relative at a funeral or a wedding, or someone I went to school with in 1977 who remembers me fondly, but I either remember them unfondly, or not at all. It's one reason why, increasingly when I go to the Valley, I mostly hang out at the family home.

All too soon, dinner was over, and the hour grew late-ish. We paid our bill and left, but not before getting these pictures, and a few others that are on my Facebook.

Cherylann, Berry, I hope it isn't another 29 years before we see each other again. For one thing, we'd be 80, and there is no guarantee that we would remember each other by then, or even what we had had for breakfast that day. We would just repeat the same thing over and over again, complain about erratic bowel movements, and wonder where our dentures are.

Well, Barry and I would. 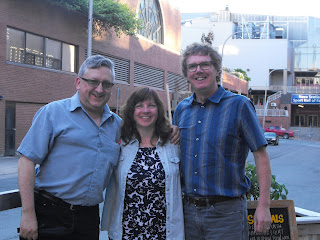 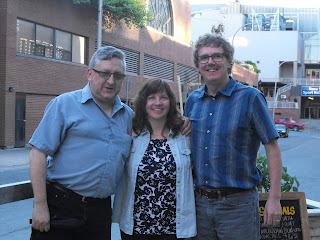 You guys have a good evening. See you tomorrow.