I don't watch them as much as I used to, but I do love movies.

Last evening, while poking through a usenet indexer, I found a film called "Calling Chicago", made in 1951 and released in '52. It is a about a man who's on a downward spiral. Alcohol has taken away his job, his self-respect, and  how his wife and daughter are leaving him.

He gets a telegram the next morning telling him that his daughter had been in a car accident outside of Chicago. The wife will call him 24 hours later with more information. The only problem is that at that very moment his phone is being removed for want of payment, and he lacks the 53 dollars necessary to get it re-instated. The phone guy cuts him a break and says he will be back the next morning for sure to remove the phone, buying the man some time.

He goes to a bank, who refuses to lift a finger because the bank manager has a bunch of other sob stories from other people. The manager says buddy should go to a charity. 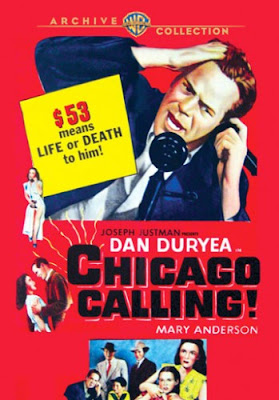 He goes to the local charity, who tells him that it would take a few days to get him the money. They tell him to go to a finance company. He does that, but because he lacks suitable collateral and a job, they can't help him. Also, the loan request is too small and too risky. Why doesn't he go to a local charity?

The next 24 hours of this man's unravelling life are about how he tries to raise the funds at least to make a long distance call to Chicago from LA. When all hope is lost, strangers who have no need to help him, do so.  But sometimes it is better not to know something than it is to know it...

I had never heard of this film before in my life, but having seen it tonight, it will stay with me for a very long time. I had never heard of Dan Duryea before, but he had a long career as a character actor, and I want to see more of his work. His wikipedia page tells me that he is unjustly overlooked. He plays this character with a lot more dignity and respect than you would expect, given that the character is a broken-down drunk who can't catch a break.

From reports, Duryea was a great guy, and a wonderful father and husband. His gravemarker is online at find a grave. Here it is: 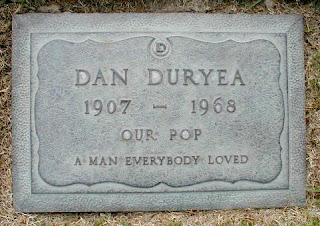 I love finding these older films, the kind of film that even long-time movie fans are unfamiliar with. A few stalwarts know about the movie. Now, so do I. And so do you.

I hope you check out "Chicago Calling". It has the Bevboy seal of approval.

Email ThisBlogThis!Share to TwitterShare to FacebookShare to Pinterest
Labels: Movie