I have produced a rough draft of my next Frank column. Assuming that the rainy weather continues and I don't go for a walk during lunch tomorrow, I will edit and revise it then, make the changes and send it off to my editor.

Tonight, we watched the season opener of iZombie. It is even better this year than last. We watched CSI:Cyber, which was viewable. The whole CSI motif is so 2007. I highly doubt if the show will make it through the entire tv season. CBS will likely trim its order and it will be gone.

Patricia went to bed early so she didn't see the entire episode of Flash, but I sure did. The show get better week after week. I grew up reading Flash comics, so to see Jay Garrick in costume, with his helmet, tonight was a fan boy's dream come true. And the homage to the very famous Flash of Two Worlds from the comics is something that most people would miss, but we geeks did not. Here is what I mean.

Here is what I mean: 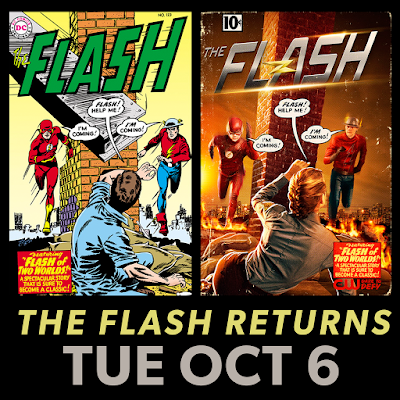 On the left is the cover for Flash #123 from 1961. It brought together the "Barry Allen" Flash (the guy on the left) with the "original" Flash, Jay Garrick, whose heyday was during the War. Through some plot device that would make you roll your eyes up inside your head, never to be seen again, these two Flashes were brought together, even though they lived on parallel worlds.

On the right hand side is a visual representation of the original cover, in the context of tonight's Flash episode.


If you click on images in google after searching for "Flash of Two Worlds", you will see many, many comics covers that are an homage to the original story. But tonight, on the Flash tv show, they did that homage as part of the storyline. And it was mighty pleasing to watch. And aren't you tired of the word "homage" already?

I love how the producers of the Flash show are respectful of the original mythos and re-work things just enough to make them compelling to today's viewers, while keeping us old farts satisfied. It is this respect for the source material that ensured the success of many comics-based films. When the source material is shunned, as it was for this summer's Fantastic Four movie, well, you get a 9% score on Rotten Tomatoes and a lot of finger pointing.

I am hoping they keep Jay around on The Flash. And I hope that the show keeps getting better. It hasn't let me down yet.

See you tomorrow, my friends.