This photo was taken by my friend Adam about an hour ago at the Metro Deli on Young Street, which is a short distance from my work. A bunch of us go there every day for coffee and, sometimes, breakfast. The food in front of me is not mine. It was for someone else, but I decided to use it as a prop. 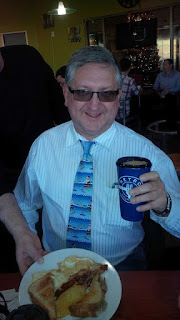 Charlie runs the place and reads my blog on a regular basis. He saw me this morning and expressed disappointment that he was not my "first" this year. You are on the list, sir. Soon. I promise. 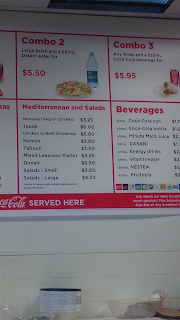 This is a picture of part of his most recent menu. It went up on Monday, but there are some unfortunate typo's that are not his fault. He will get them corrected, but in the meantime, they are selling gay men there for only 3 bucks. I am not sure what the corrected price will be. Or, maybe, just maybe, Charlie meant "hummus". Turns out that this delicacy can be spelled many different ways, including houmous (common in British English), hummous, hommos, humos, hommus and hoummos. Maybe Charlie selected one of those variant spellings, and the fool who actually produced the menu misinterpreted things.

I am sure it will be fixed soon. In the mean time, you can marvel at how some stupid people can be. Just don't blame Charlie. Not his fault.

You guys have a good day. Tomorrow... Day Two!!