I'm sorry I didn't write over the weekend. I wasn't feeling well. Well, that, and I spent many hours watching "Making a Murderer" on Netflix. You must watch it. 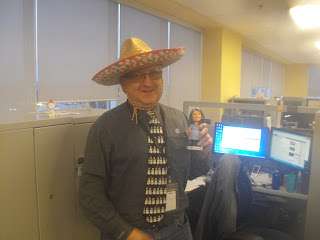 Today's picture was inspired by my friend Robert Collins, a regular Blog reader, who comments on nearly every blog post, usually minutes after I've written it. He had won a Stephanie Domet bobblehead from CBC radio. Rather than have it collect dust at his home, and have his wife rag on him about it ask him to get rid of it, he decided to give it to me. 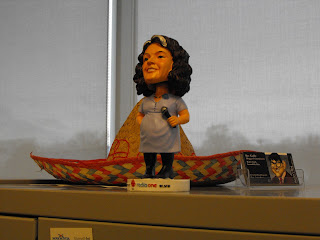 I have been outspoken about Stephanie Domet. I have to respect and acknowledge that she had her fans. I was not one of them. When I think about the talented broadcasters at the local CBC who are underutilized, who fight to get any airtime at all, for Ms. Domet to clutter the airwaves with her brand of broadcasting seemed like a horrid waste to me. Gimme Jackie Torrens. Gimme Carmen Klassen. Gimme Louise Renault, moved over from Information Morning, and into her own full-time radio show. 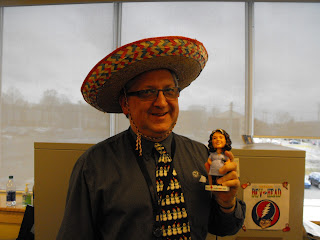 Stephanie's lasting contribution to the lexicon will probably be the phrase "storm chips", the kind of snacks one should stockpile for Nova Scotia winters when it is foolhardy to venture outside, on days when Netflix beckons like a dead relative standing in a far off light. It is not a bad way to be remembered.

The phrase took off. Now, you can buy actual storm chips. And other people have come up with storm wine and storm beer. I wonder if storm heroin is available from your local drug dealer. 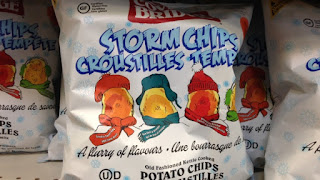 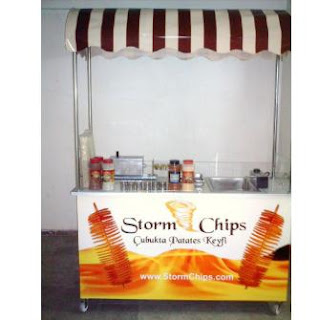 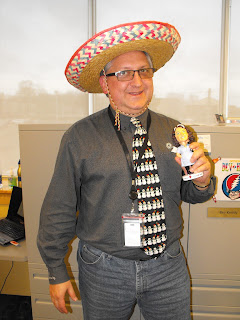 Anyway, Robert gave me this bobblehead, and it seemed to me to be appropriate to pose with it for a Christmas tie photo, or nine.

I plan to write another blog post later on today. I can fill in a few pieces to the story about the postal worker who got the letter to Santa and how he spent the next 22 years trying to find out who wrote it. Stuff the CBC hasn't reported that makes the story all the more interesting.

There was controversy whether she actually coined the phrase regarding potato crisps (I refuse to use the phrase as I despise it) or swiped it from someone in PEI who had come up with it the year previous. There were some online news stories about this last year but strangely, CBC never reported on them.

"Potato crisps", or "storm chips"? I find it hard to believe she coined the phrase, but that she popularized it. She would have had more of a reach than the poor sod who might have actually coined the term.

Who are you, sir?

Silly me. I misread your earlier comment, "Anonymous". The phrase "storm chips" doesn't bother me. But I would love to know where it actually came from.