We have reached the end of the road, ladies and gentlemen. The last day of the 2015 Christmas Tie Extravaganza.

This was taken on my new smartphone a Moto G3, one of the so-called "budget" smartphones out there that still cost $249.99 to buy new, but which is "zero dollars" following a 2 year contract. It has a 13mp back facing camera and at least a 5mp front-facing one. 8GB of storage and 1GB of ram. Blows the pants right off the smartphone I already had, and runs much faster than the tablet I got a few weeks ago. I am not sure how much faster a top-of-the-line phone would be. 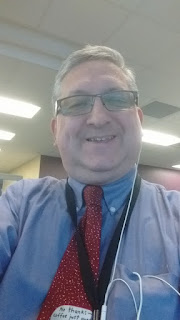 The 8th year of the Bevboy's Christmas Tie Extravaganza is over. I am relieved, as it has become more and more difficult to find places to get my picture taken in. I hope you have enjoyed it. Whether I do it again next year is up to you. Let me know.

At any rate, I spent the rest of Christmas Eve here at the house. Christmas morn came, and we opened prezzies. We are just relaxing now.

I will write more about Christmas 2015, later on today, or on the morrow.