After work we were hungry. We didn't feel like cooking. So, we decided we hadn't had fish and chips for a while, and that a "feed" of it would go down right some nice.

We decided to check out Fredie's Fantastic Fishhouse on Oland Crescent in Bayer's Lake. We had been there before, but had not been overly impressed.

We sure were, tonight.

And, it turns out that Henry Winkler was in Halifax in 2014. He happened to read an article in the Huffington Post regarding places to eat in Halifax. He decided he had a hankering for fish and chips. So he instructed his limo driver to go to Fredie's. He enjoyed his meal and posed with the staff.

The staff were so taken with him that they christened the place where he sat. And I sat there this evening. Here's proof. That is Patricia's thumb, by the way. I was too busy taking the damn picture. 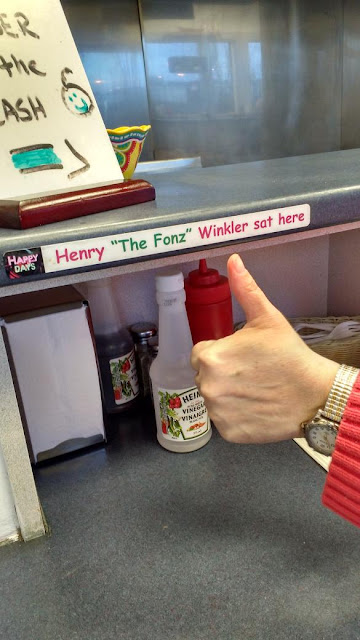 And, it turns out that the guy who co-wrote the "Happy Days" theme song, also ate at Fredie's, somewhat later than Winkler.

If you follow Winkler on twitter, he tweeted about his experience at Fredie's. Let me see if I can find that tweet and I will run it here.

If you are in a mood for fish and chips, and are in Halifax, get ur arse over to Fredie's in Bayer's Lake. It has the Bevboy seal of approval. And that doesn't come easily, folks.