I treated myself to breakfast this morning, at the Ardmore Tearoom on Quinpool Road. Patricia had medical appointments today in Dartmouth, which meant she had to take the day off.

Anyway, I got my usual French Toast from that fine eating establishment. It is actual bread, nothing fancy, fried in an egg and milk mixture, and served to perfection, for 6 dollars. Add a bottomless cup of coffee for 2 bucks, and you had a pretty decent meal.

What doesn't look like a decent meal, however, is this: 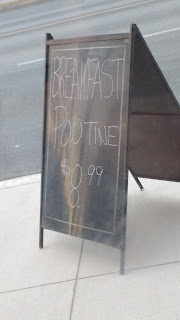 Breakfast poutine, served at the Ardmore, for that price.

The server told me what was in it. It's a big bowl, full of hashbrowns, bacon, sausage, cheese curds; and then the insanity is smothered in hollandaise sauce. I think they also supply a lawyer who specializes in last wills and testaments, just in case the diner feels a twinge of guilt (or heart pain) and decides to make sure that things are nice and legal if he kicks off during the eating of this food.

I am not saying I would never eat something like that. I am saying that I would have had to eat nothing for a couple of days and be ten times more depressed than I am by default, before I would consider ordering breakfast poutine.

This has got me to thinking, which scares me a little, because I don't think much. What is the most... interesting thing you have ordered on a breakfast menu? Something you know you should not have eaten, but did, anyway?