Hello again, my lovelies. How are you this evening?

I recently decided to make a change. I have made it, and it is working fine. So, I will tell you about it.

I no longer use those crazy-arse expensive razor blades. You know, the Proglide things that have 17 blades on them to give you the closest.shave.ever!

When I got my shave and a haircut from Sailor Bup's in December of 2014, they used a regular straight razor on me. One that looked like this: 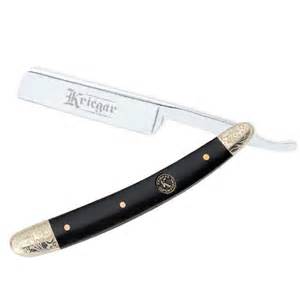 I got a great shave there that day. There was no Gillette Proglide, 17 blade blah blah blah to be had there. Why not?

I still had a supply of those expensive blades, so I have been using them dutifully. I would shave, wash the razor, thoroughly dry the thing, in order to keep it lasting longer than it would have had I not. Finally, in recent weeks, I have found that these blades were becoming less and less effective, ripping at the whiskers rather than gently scraping them away.

I did not want to spend 50 dollars or more on another set of those expensive blades.

I remembered what my father used before I started to shave: one of those regular, old-fashioned razors where he would have to take it apart, remove the razor blade and replace it with a new one, every week or so. Like this: 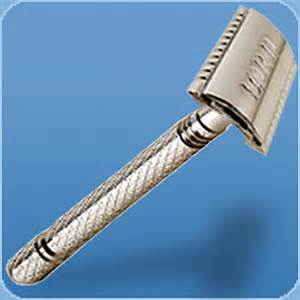 And, like I said, he had to have a supply of razor blades on hand, similar to these ones: 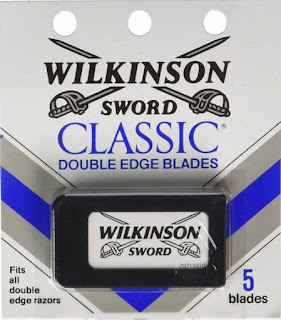 This worked fine for Dad for many years. In the 1980's, he moved over to disposable razors. They worked fine for both of us for some time. But I eventually found that these disposable things did an increasingly-poor job on my face, ripping my skin rather than shaving it, causing more than a few cuts and knicks and blood letting sessions. That's why I moved to the expensive blades quite a few years ago. I think Dad kept muddling along with the cheap blades until I started buying him the expensive Gillette ones that I used. He loved them, and I made sure he had a steady supply of them as presents for Christmas and his birthday.

I ended up looking on Amazon and ordered a Lord safety razor. It came with a "starter pack" or 5 razor blades. It came on Monday, and I tried it out for the first time Monday night, after my shower. The razor had a good "heft", and felt good and natural in my hand, while I went to work.

It took a few minutes, but I developed the kind of routine and pattern conducive to a good shave. I had to press a bit harder against my skin than I did with the Proglide razors. The whiskers that were about a week old, came off very nicely. My face felt smooth and clean. And, I had not cut myself.

I had another shower and a shave last evening. Once again, there were no cuts. My face felt smooth and Patricia pronounced that I looked great. And I am happy with my purchase, despite the typo's on the packaging that made me think I had got a knockoff product.

I have had two good shaves so far. I still wash the razor after each use and make sure it is dry, too, to prevent blade rust, which destroys the sharpness of the blade.

Patricia was a little miffed that I had not asked her to buy me this razor for my birthday or something. I told her that she could buy me a better quality razor for Christmas, one that used these razor blades, but which has more heft again, or perhaps a few more features, such as a "butterfly" aspect that makes it easier to replace the blades. I will leave that to her.

I am still using the first blade. Four left, so I have plenty of time either to source a local place that sells these razor blades, or order them online. If you have any suggestions, I am open to them.

I am  not sure how much you care about this stuff, but I do. I like to save money, and I think I will with this purchase, while also getting good, close shaves. Once you get over the cost of the razor, the blades are very inexpensive.

What kind of deals have you found for yourself over the years?

You have a good evening.  See you tomorrow.

Email ThisBlogThis!Share to TwitterShare to FacebookShare to Pinterest
Labels: Shaving

Bev, as I pointed out in Facebook, I highly recommend https://www.fendrihan.ca/collections/shaving for all your future needs.