Hi. Welcome to the Valley.

These humble, sub-par, slightly pathetic and off-putting words, come to you from my old bedroom at the family home. Behind the computer desk is the window through which I looked many, many, many times over the years when I was growing up. I remember the family cat, JR, who eventually ran off and was never seen again (likely hit by a car, which is why Newbie never leaves the house), climbing on top of some of my father's staging and leaping into the window, waiting for me to let him in. He mostly was a cellar dweller because my mother didn't like cats. I'd sneak him upstairs anyway.

But you don't care about that.

You care about this: 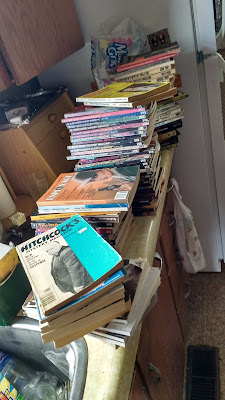 Yep. I found the mother lode.

I have been reading and collecting Ellery Queen's Mystery Magazine since my father bought me a subscription to it when I was 11. The first issue in the subscription was the February 1976 one, and I still have it. It was the second one to arrive, though, because the March one landed in the house first. I have that one, too.

Some 40 years later, I have hundreds of these magazines. Nearly 1000 issues have been published since its launch in 1941. I have managed to acquire a few issues from the 1940's, but not that far back. Maybe some day, if I am lucky.

I got a bunch more back issues in 2015, twice, plus 2 months ago, when a man in Dartmouth, in an effort to downsize his life, upsized mine by giving me a couple hundred more issues, very few of which I already had. Lovely.

But, I was missing a stretch of issues, from February 1984 through to the Fall of 1985. I tore this house apart. I tore my own house apart. No dice.

A few days ago, it occurred to me that perhaps these issues might be upstairs in the attic. I don't know why this occurred to me. I have no recollection whatsoever of storing them up there. But either I did, or my father did. I guess it was me.

So, when I got here this morning, I got on a chair, opened the attic access, pulled down the old ladder, and climbed it, peering inside, illuminating the space with a flashlight. Off just beyond my reach was the computer I bought a very long time ago, which I must pull down sometime and take to a depot for disposal. Remind me, okay?

Also, there was a series of boxes. I reached for one of them, opened it, and found some back issues of what I sought, plus 1980's issues of Analog, Isaac Asimov's Science Fiction Magazine, F&SF. I dropped the contents of this box, a few at a time, through the attic opening, on to the floor. Went back downstairs. Sorted through them, setting aside the EQMM's, and returned upstairs.

I found a second box with more such mags in them. I repeated the process.

After lunch, I rested a bit. I knew there were more missing magazines. Could they be still in the attic? Why in the hell had I put them up there in the first place?

I went back in the attic. Much darker this time, as it was mid afternoon and a bit overcast inside, which made it even dingier. I made my way over to some boxes. I found the chemistry textbooks that my sister had left here a very long time ago, the gift of a former roommate who moved out suddenly. crawled over to some other boxes, and voila! found many more EQMM's, plus the other mags. I also found a few issues of Alfred Hitchcock's Mystery Magazine, and Mike Shayne's Mystery Magazine. All of them were dropped down the attic opening.

I went back downstairs. I sorted through the ones I wanted to keep. And I put them where you saw them above.

Later on, I put them in a box, but not before I put them on the kitchen floor and took some pics. 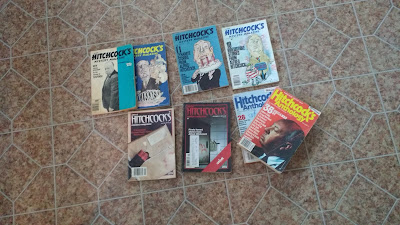 The AHMM's are from before the great format change of 1982, when they changed the layout of the magazine so much I barely recognized it. These ones still have the one or two line introduction to the stories, the sketches/drawings, and even the Hitchcock cameos in some of the drawings. That all went by the way side in 1982, and I was disappointed by the changes.

I also discovered a couple back issues of Mike Shayne's Mystery Magazine that I had long since forgotten about. Plus, 4 more issues of Espionage I had forgotten existed, and which I can add to the ones in the city. 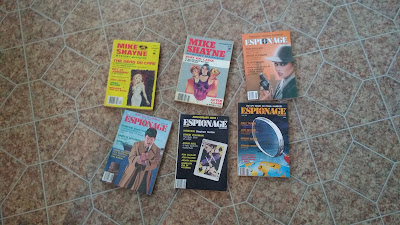 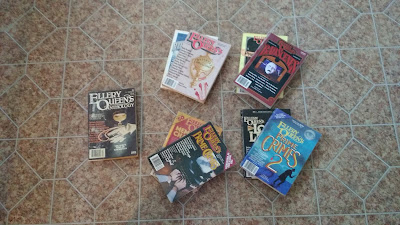 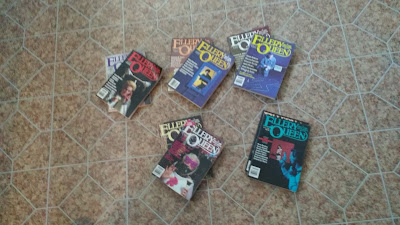 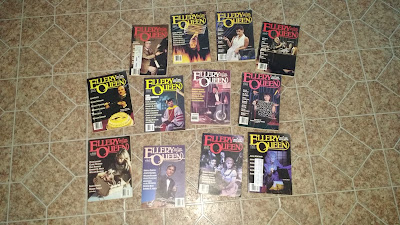 One of these is the special "International Issue", which EQMM publishes the odd time, and has been since the 1940's. The current issue, May of 2016, is another example, by the way. I got it in the mail just this week. Nice to find that old one from 1968 or so, today. Other issues in the following picture are from the 1950's, a couple from the '70's, and the rest from the early 1980's. 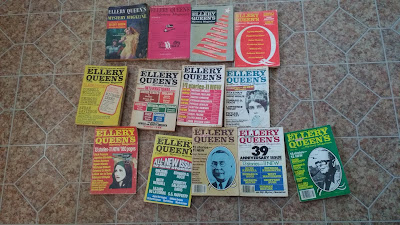 A paperback book reprinting some stories from EQMM. Published in the early 1960's. 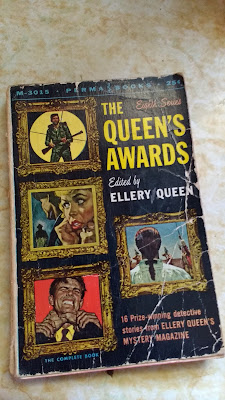 I love the cover from June of 1984. It's the one on the upper left, below. Guy in a wife beater, watching himself on tv, while someone wielding a knife is about to bifurcate him. I have an anecdote about that issue. One morning, before I began my job working in the library at Acadia University, I showed up at the Student Union Building and decided to kill a few minutes before work by reading a story from that issue. Off at the other end of the room there was a professor I recognized, reading a story from the very same issue! I wish I had gone over and introduced myself. But maybe he would have thought I was trying to bifurcate him, so it is just as well. 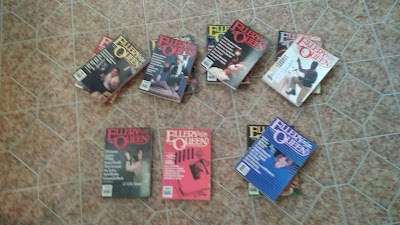 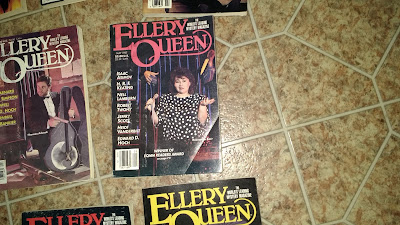 Somehow, the folks at EQMM had a budget to hire actual stars to pose for pictures, or got publicity photos you can't get anywhere else. The above is a 1987 issue with a much younger Roseanne Barr. This was before her eponymous tv show, back when she was still on her way up, working the stand up circuit.

Other covers have Steve Allen on them, or noted writers of the day.

I am thrilled to have these issues now. And when I return to Halifax tomorrow, I will integrate them into my many EQMM/AHMM/MSMM/Espionage back issues. That will be lots of fun. Not.

I think I have earned a rest. Maybe even half a beer.