I am back in the city, having returned this afternoon.

Of course, I brought back those back issues of Ellery Queen and Alfred Hitchcock, plus the few of Mike Shayne and Espionage. The latter two are put away on the shelf, but the first two are anything but. Integrating the EQMM's will likely take an hour or so, and the AHMM's, perhaps 20 minutes. Too tired to do it this evening.

I thought you might like to see a better version of the cover of EQMM from June of 1984, which I discussed yesterday. I did a scan of it just now. The magazines were stored in those cardboard boxes in the attic for 28 years or so. A cold, dark place is the best place to store things, as archivists will tell you. The magazines are in excellent condition, or at least in a very similar condition to what they were like when I put them up in the attic, all those years ago.

There's some artifacting in this image because scanners struggle with a picture that's dark. The original cover has a lot of blacks and dark greens in it. Plus, the wall has a pattern on it which comes across weird in this image. But, anyway, here's what's likely my fave cover of EQMM ever. It's the same issue I was reading in May of 1984 when I espied the university professor in the SUB reading his own copy as I was reading mine. Small world. Wonder if he still has his copy, all these years later? 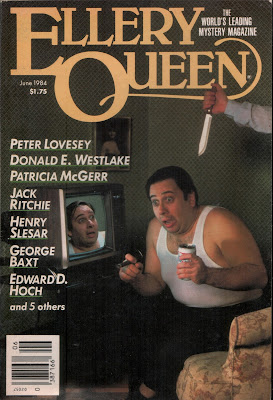 Yeah, so Buddy in a wife beater, watching himself on tv, reacting to a knife about to plunge into Buddy's back. So... symmetric, eh?

It lists one of its authors, Edward D. Hoch. Hoch had at least one story in every issue of EQMM starting in May of 1973 until April or May of 2009. 36 full years, only interrupted by Hoch's death a year earlier. He wrote upward of 950 short stories in his life time, and I'll bet as he passed that he wised he could have produced a full 1000.

Henry Slesar had a distinguished and prolific career, not just writing in the mystery field but in science fiction as well. But he is perhaps best remembered to those of a certain age as being the head writer, between 1968 and 1984, of the soap opera The Edge of Night. I remember a friend's mother watching that show. My mother was an "Another World" fan.

Anyway, that's my fave EQMM cover. I'm glad it's back under the roof with its hundreds of brethren.

Tomorrow, I'll scan in something else, something from my high school. I very nearly threw it out with my recycling last month but decided it represented an interesting story, so tomorrow night, I'll share it with you.