Well, this is something I very nearly threw out with my recycling a couple of weeks ago. At the very last minute, as I was lashing the clear bag together at the curb, I looked inside and saw this piece of paper, realized that it had a bit of significance, and rescued it. 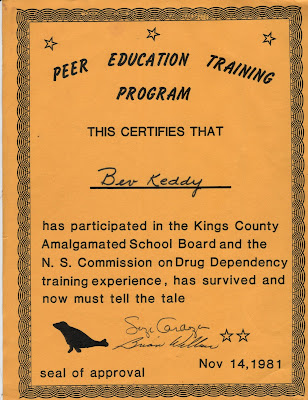 I was in my senior year of high school, Grade Twelve, at Cornwallis District High School in Canning. Because I was a good student, and didn't cause anybody any trouble, the teachers and principal decided to treat me and a few similar students to a weekend retreat, which I think happened over two weekends. At this retreat they would teach us how to "peer educate" younger students about the evils of drugs and alcohol.

I was a strange choice. I had only been drunk once in my life up to that point, in the summer of 1978, when I got into my uncle's apple cider. When we got home, my father shook his finger at me, told me not to drink any more, and I swear to you, I haven't had a drop of alcoholic apple cider ever since.

Don't get me started on drugs. I have only been high a couple of times in my life, when I was at the dentist for surgery that required I be on a narcotic. I'm not saying they were bad experiences, just that they didn't taste like more.

Anyway, several of us from my school, plus several others from other nearby schools, plus some teachers to act as chaperones, all piled into a bus and went off to Kingswood Bible Camp (it still exists!), rented out by the school board for us to use that weekend. It was October 30, 1981, a Friday.

We got there. I was served my very first baked potato and had little idea what to do with it, so I watched others eat it and figured it would be okay for me to, as well. (35 years later, I still consider a baked potato to be a treat.) And we were exposed to public speaking. We all had to get up and say something. I said something and got a laugh. Don't ask me what it was, because I'm sure it wasn't funny to me at the time.

The training went on into the evening. We were encouraged to sit around and play guitars that materialized out of the ether, and sing. I decided to spare them my singing voice and found my room.

Saturday morning I got up so early that the main chaperone nearly jumped out of his pants when he saw me.

We had more training and returned to our homes that evening, which was Hallowe'en. I had a part time job at a dog kennel back then and was asked to housesit for my bosses. I did, and my sister decided to try to scare the crap out of me by knocking on the doors and running away. ha ha.

It was that weekend when CJCH AM pulled a pretty neat prank on its listeners. It told its audience that the station would "become part of the past". I missed the beginning of it because I was at sequestered at Kingswood, but got back in time to hear the Saturday content, including that evening when I was house sitting. It remains some of the strangest radio I have ever heard. They pretended it was 1967 or something, and did their level best to give listeners a flavour of what jocks talked like back then. I have nothing to compare it to, but it sounded psychedelic. But what do I know? I have never done drugs, remember?

We went back to Kingswood two weeks later. More training. And we got these really slick certificates. My vice principal drove me back to the school and then to home, because it was on his way. While he went to his office to get something, I sneaked a peak into the girls' washroom, because, well, I wanted to know what the girls' washroom looked like. No urinals. I hadn't known.

Later on in November, we students met with younger students and attempted to teach them about the evils of drugs and drinking. Most didn't listen to us or care. One student came up to me afterward though and thanked me. That was worth the trips to Kingswood, struggling with a baked potato, and not singing.

Two little postscripts. On the first weekend, we were transported home via bus. One girl saw me staring off into space and told me smile. I did. She smiled back. And two years later, I saw her at Acadia University as I rounded a corner. She smiled again. Or maybe she had gas. I am still not sure. Better to be safe than sorry so I didn't ask her out.

The other postscript? Well, one of the teacher chaperones was Heather Stevens, my English teacher in grade 9 when I was attending Kings County Academy. I have written about the horrors of my three years in junior high, before, in this blog. I will not relive them tonight, because The Flash starts in 6 minutes. But I abruptly disappeared after grade 9 and went to Cornwallis after that. Ms. Stevens had not seen me in the interim. I re-introduced myself to her on Friday. That weekend, when I was sitting by myself, she came over and talked to me. We had a nice chat. She had often thought about me over the years. I didn't want to talk about how I had been bullied within an inch of my life while at her school, so I demurred on why I had left. I know that she was happy for me because I hadn't quit school, killed myself, or wound up in a gutter. When she saw me after that, months later, she was very warm in greeting me. I always liked and respected her, and I wonder what became of her. Does anybody know?

And, now you have it: My first exposure to teaching.