Two days from now, I will be able to bask in the glory of 4 days off work. But, fear not, effendi, as Stan Lee used to say all the time. I will still write blog posts for you, every stinking day. I will also chip away at my next Frank column and work more on that special project. While I will be away from my paying job for 4 days, I will not be away from work.

How was your day? The highlight of mine was getting those mystery magazines I ordered a few days ago. They are vintage issues from the 1980's and earlier. I have now pretty much doubled my Mike Shayne Mystery Magazine collection, to a whole 40 issues. That represents barely 10% of the entire run of the magazine. Good luck seeing me ever get every issue. A fella can dream. Not that it is something to dream about.

I also got a 1974 issue of Charlie Chan's Mystery Magazine. I noticed something quite unusual about it, something that makes me think I should get out a bit more. The cover is one that was used over and over again, by other magazines.

Let me prove it to you. 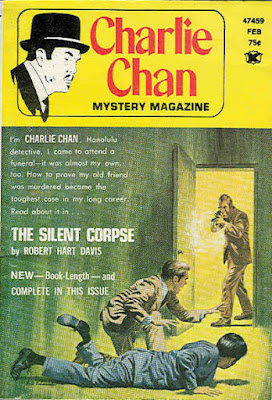 Here's an issue of Mike Shayne, from 1976. I do not have this issue, but grabbed the cover from a website that lists covers of such magazines. 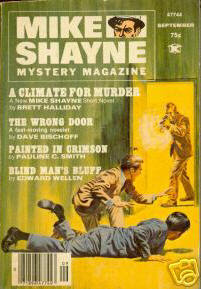 From the same website, but I do have this issue in my collection. Had this issue for years. 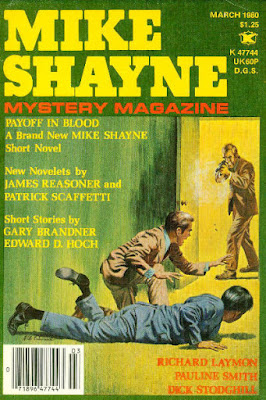 Now, is this cheap, or is this cheap, to re-use the same cover? It seems 10x worse to use it on Mike Shayne, because people collected the magazine and subscribed to it. More than a few would have noticed that the cover from a 1976 issue was re-used less than 4 years later. But how many would have noticed that the cover goes back before '76, for a different magazine? For all I know, the cover on that old Charlie Chan was used yet again, somewhere else. And perhaps, even after 1980, it was used on some other magazine, perhaps a third issue of Mike Shayne. If I felt like it, I could look at all the other issues of Mike Shayne to see if they pulled this little stunt again.

I am not angry about it. It just seems cheap. I grant you, it's a dynamic cover, but do I need to see it over and over again?

This is worse, in my opinion, than what they did on Alfred Hitchcock's Mystery Magazine back in the day, when they would use the same picture of Hitch, color the background differently, and call it a new cover. This is the same damned drawing, used repeatedly.

Anyway, it's late, and you don't care about any of this. Just be happy for me that I have doubled my collection of MSMM, added 5 more issues to my EQMM collection, and got 11 more issues of AHMM, two of which have Jas. R. Petrin stories I didn't already have. It was a good day.

Except for the whole cover thing.