Another long day. I was up until past midnight this morning, and up just past 5:30. A long shower perked me up.

After work, we went to Costco. We returned home, and I was pleased to see that the young man down the street had mowed my lawn. I will pay him tomorrow. And since about 6:45, with nary a break, I have been down here in my home office working toward my latest deadline for a special project. It is the hardest I have worked on a writing assignment (outside of work stuff) probably since university. Many twists and turns. It has been an interesting process. I just hope that it meets the rigors it needs to, and passes the muster it ... uh, must.

Sorry for being so vague about this. I will tell you all about it when I can. I promise.

So, I did watch the season ender of The Flash last night. I managed to guess that the man in the iron mask was indeed the Earth (3) Jay Garrick. Zoom had appropriated his name. And, the coolest part of all is that this Jay Garrick is played by John Wesley Shipp. As many of you know, John Wesley Shipp played the Barry Allen Flash 25 years ago. In fact, that show ended in May of 1991. Pretty much exactly 25 years ago to the day, we see John Wesley Shipp playing another Flash, this time what's known as the Golden Age Flash. You have no idea, folks, what a cool thing this is. Here. Here's how he looked then. 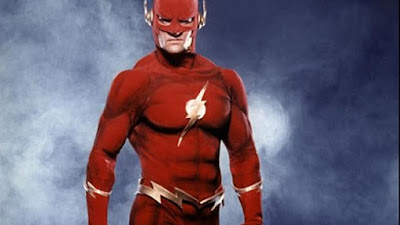 And, this is John Wesley Shipp as Jay Garrick. 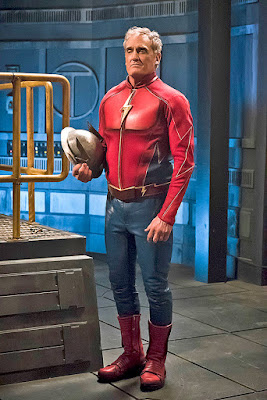 If you think he's too old to play the Flash, keep that information to yourself. The character of Jay Garrick is in his 90's, having been the Flash since World War II. Through some pseudo mumbo jumbo means, he has aged very slowly, looking more like a man in his 50's. Shipp is just past 60, and I think he can pass for someone in his 50's.

And, also in the season finale, the Barry Allen Flash went back in time to the point where his mother was about to be killed, prevented that murder, and now we have no idea what will happen next season. His father will never have been charged with (falsely) killing his mother, and there is likely no Flash in that timeline at all, because Barry will not have felt the need to become a police scientist in the first place, and therefore not have been exposed to the chemicals and the lightning that made him the Flash in the first place.

A little spaced out from lack of sleep. I think I will do something about that.