I drove up this morning. The weather was not the greatest by the time I got here. I despaired that I would not be able to mow the lawn. The grass was up to me arse, so I could not really delay it any longer. I began mowing around 11:15, but had to stop when the rain commenced.

I found other things to do until around 4pm, and resumed the lawn. I worked on it until 6pm. I watched the news, and Inner Space on the Space channel, and then went back outside again, working until shortly after 8. It is pretty much done now. I could have stayed out a bit longer, but the friggin' black flies were starting to carry me away. Saturday afternoon, I hope to get the weed whacker out and do around the perimeter of the house. But, at least, most of the work is done. The grounds no longer look like a jungle.

Tomorrow morning I will get up early. 7 or so. I will grab something to eat and make sure I am on the road by 8 at the latest, to take advantage of the village-wide yardsale in Port Williams. Spatula, here I come!

When I got to Wolfville this morning to get a few victuals, I happened to notice the cover of the current  Frank Magazine. It may interest you to know that they vary the covers throughout the province, playing up local content for the various markets. Here is the cover for the Valley edition: 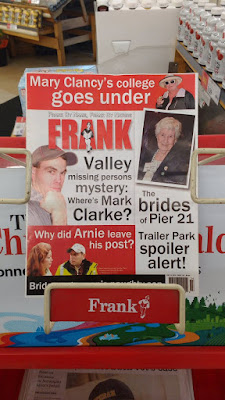 My article about Mark Clarke made the cover, and prominently, to boot. I am very honored.

I can tell you that the issue of Frank the comes out this coming Monday has another true crime column by moi in it. This one is an unsolved murder. A gangland murder. In Halifax. A long time ago. You will see it on Monday if you are an online subscriber. A couple of days later if you get the print edition.

I think I will fire up Netflix for a few minutes, find something to watch, and turn in without watching it. Don't tell me you don't do that, too. Surely I am not the only one.