We decided to go out for coffee this afternoon. We had thought about going to Starbuck's or The Second Cup in Bayer's Lake, but at the last minute I recommended going to Otis and Clementine's in Tantallon.

It is a really neat used bookstore. It is clean and spacious and has an eclectic range of books to suit any taste. Plus, they sell coffee. I had a vanilla latte, and it tasted like more.

As for books, I got a tome about Huey P. Long, the once governor of Louisiana and then senator who at one time was gunning to be president, and might well have got there, had he not been assassinated. Some 80 years later, people still talk about him with the tone of, "Phew! We really dodged one there!"

There are several biographies about Long, but this is the one I got. 7 dollars that I hope will be well spent.

We hung around there for a while. They had a shelf of books just outside the store. Books were 2 dollars each or you could fill a Sobeys bag, stuff as many books in it as you want, for 10 dollars, taxes in. We took good advantage of that, cramming in as much Summer reading at the cottage as possible. The staff member was so impressed she gave us a second bag for the overage, and didn't charge us anything extra. I had not realized how many books Lawrence Sanders had published until today, nor that someone took over writing books under his name after he died.

We left and wandered next door to the Home Hardware store. We looked at the barbecues. Sensing our confusion, a staff member walked over and guided us to the "Green Egg" barbecues, which are pricier than heck, but which have a build quality that would rival anything the military could ever want or use. I get the feeling that they sell them on commission and have a few too many in stock.

Around 4:40, we took off again, eventually driving into Hubbards and alighting at the Trellis Cafe, where we had been several times before. We grabbed a table. It had not been cleaned off from the previous folks who had used it, and waited in vain for someone to bus it and clean it off. It did not happen. The folks at the next table had also been waiting for some time. They left. The guy at the other next table complained that his glass of water had some schmutz on it and requested a replacement. Patricia and I looked at each other and left.

We drove to the Queensland beach and soaked our feet. We continued on our journey back to the city and ended up at Samira's Lebanese Cuisine in Blackpoint, along the St. Margaret's Bay Road. It has been there since 1981.

My goodness, we had a good time there. We ordered the $38 combo plate, which contained 8 different pairs of food: 2 skewers, 2 of this kind of pastry, 2 kibbeh, 2 of that kind of pastry. Plus hummous and pita bread and rice with lentils. For dessert we had... what the hell were those pastries called? I can't remember. But there was a tiny dish of ice cream to go along with it, plus fruit: grapes, melon slices, an orange slice. And Turkish coffee so bitter and so strong that I will be up all night. We finally figured out that you eat some of the sweet dessert and then take a good sip of the coffee to even things out.

I teased our server, who was actually Samira, whether there might be dancing later on. "Only if you dance with me!", she replied. Sure enough, during the dinner, she rolled out the music player thingy, fired up some Lebanese music, and made me dance with her. Here's proof. 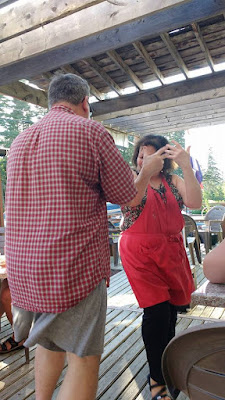 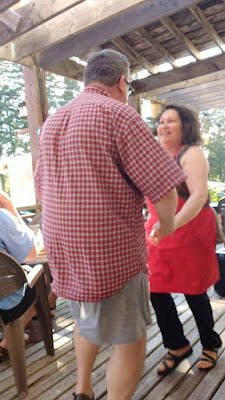 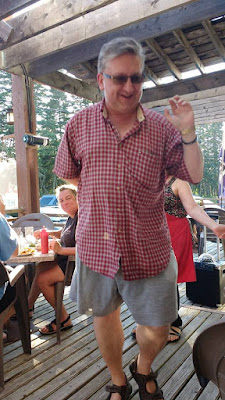 Notice in the last one, that that lady is checking out my ass. But I don't blame her, and neither should you. Humanity has to have that in order to procreate, you know.

We have eaten at a couple of places over the last few days. Tonight's meal was so good, we loved the ambience and service so much, that we can't wait to go back there.

Tomorrow, for sure, cottage!

See you when I see you.